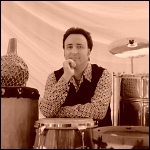 With over 120 albums to his credit, Alex Pertout is today undeniably one of Australias most recorded percussionists, and if you consider his work in soundtracks, commercials, TV orchestras, theatre and live performances, he may also prove to be one of Australias most diverse percussionists.  Some of the artists he has recorded and performed with include the Australian Art Orchestra, Little River Band with John Farnham, Japanese fusion band Casiopea, Brian Brown, French artist CharlElie Couture, Tina Arena, Danii Minogue, Merril Bainbridge, Tommy Emmanuel, Paul Grabowsky, Tony Gould, Olivia Newton-John, Grace Knight, Melbourne Symphony Orchestra, Malaysian pop band Wings, Australian Philharmonic Orchestra, James Morrison, The Seekers, Archie Roach, Brian Cadd, Joe Camilleri, Kate Ceberano, Billy Thorpe & the Aztecs, Pseudo Echo, Mondo Rock and Marc Hunter, among many.  His is a career of humble beginnings, and of an entire youth spent mostly listening to, analysing and adapting the Afro-Cuban rhythms of his inspirational gurus Michael Carabello and Jose Chepito Areas from the Carlos Santana phenomenon of the early seventies.  An obsession that consequently led to a colossal record and book collection, and a widely acknowledged expertise in the art of Latin American percussion.  After graduating from the College of the Arts in 1983 with distinction in performance and composition, he went on to also establish a career as a respected educator, and the eminent release of the Alex Pertout self-titled debut CD and "Sight Reading: The Rhythm Book" further enhanced his status as one of Australias leading percussionists.

How would you describe the important aspects of being a percussionist in the musical climate of today?

AP: "One of the important aspects is that the educated percussionist has at his or her disposal an incredible range of instruments and rhythms, which he or she can easily adapt to a variety of styles.  Most composers, players and producers working in the contemporary popular music scene nowadays have a lot more knowledge of percussion instruments and sounds, so the percussionist is not only hired a lot more on recordings and live performances, but is also asked to be more involved in terms of being creative, thus contributing on a larger scale.  Most of my recordings are in this area, and so I have a ball!"

Tell me about your musical instrument collection.  What do you consider as some of your most interesting items?

AP: "I love them all!  To me they all have some incredible beauty, even the simplest hand drum.  Apart from my love for African and Afro-American instruments, I was in India with the Australian Art Orchestra a while back and saw clay pots (gatham) and little frame drums (kanjira), which were delightful and are played with an astonishing dexterity.  As far as the ones that are closest to my heart, they include the Brazilian berimbau (a one-string bow with a gourd resonator), the Afro-Peruvian cajon (wooden box), the Afro-Cuban congas, the Puerto Rican pandereta which is used in Plenas, other frame drums, some of Middle Eastern background like the mazhar and duf, others with Indian connections, finger cymbals, bells, chimes, all types of shakers, many which I personally make for my recordings, shekeres, my Argentinean bombo then again, I think I can just keep telling you about my whole collection!"

Do you have an opinion on analogue versus digital with regards to capturing the essence of percussive and non-percussive sounds?

AP: "The first thing that really impressed me about digital when it first came in was the clarity.  As digital became more widely used, it set the new standard in that you could listen to bells or shakers without any hiss, and without the deteriorating noise that affects analogue tape after many playbacks.  I am aware that for some lower frequency sounds the warmth of the analogue tape is a reality, the way it captures those sounds, it is different, nevertheless I have found that I can still capture sounds of instruments with beautiful presence and warmth by choosing the correct room, mic and position for that particular instrument, and with the added presence and clarity that digital brings.  Many people still prefer to listen to vinyl rather than CDs.  For me, the first time I heard my favourite albums on CD, boy that was an incredible experience.  I heard many things that I never realized were there before, it just captured me right away!"

What recording techniques have you explored so far in your latest recording project Friendship?

AP: "I have been experimenting with many techniques, including room sound, close micking, and basically getting the best recorded sound out of each instrument.  I am extremely fussy with my own work and spend many hours perfecting what I record.  Due to my session recording career, I have also had a chance to be around the best engineers in the country, people like Ross Cockle, who by the way always make sure to include on my own projects, and so I am always observing and asking lots of questions.  This practice has even been going as far as using the Internet to research more about recording.  Some of my favourite recorded percussion comes from some of the early Santana albums, and I have been fortunate to have had the chance to communicate with engineer Glen Kolotkin, responsible for many of those recordings, and who was kind enough to give me excellent tips on the way he approaches recording instruments, and specially percussion."

How do you generally approach composition as a percussionist?  Is there an eternal struggle between the balance of rhythmic and melodic content?

AP: "My main concern is to write lyrical pieces which contain some beautiful rich chords.  The rhythmic side helps define which way the piece might go, but I always feel that I can change that around, so most of the pieces are not really written with a specific rhythm in mind, but rather as musical statements which can then be arranged in different manners.  As an example, I wrote a ballad as the main theme of a film soundtrack a few years back.  As I have always enjoyed this piece, I really wanted to incorporate the piece it into my band's repertoire, so I decided to rearrange it with an Afro-Cuban 6/8 feel underneath.  The result is that it works beautifully.  Since then I have recorded it for my up and coming album with American pianist Mark Levine featured."

Do you have any other special projects in the horizon?

AP: "Well, I am surrounded by a variety of people who bring many diverse and interesting projects my way.  Some of these include a CD and some projected overseas tours with the Australian Art Orchestra, which is directed by Paul Grabowsky, some performances and a CD with singer Christine Sullivan for which we also recorded a couple of my compositions.  I recently produced Brian Brown's latest CD 'Flight', and we are talking about recording another.  Of course I'm finishing my current recording, which features many outstanding artists including Mike Stern, Tommy Emmanuel, Mark Levine, Hossam Ramzy, Raul Rekow, Paul Grabowsky, Christine Sullivan, Steve Wade, Kavisha Mazzella and David Jones, among others.  As well as all that I am also finishing a book and CD on percussion, which features material which I have been researching and writing for more than twenty years."

Alex Pertout: From the Heart