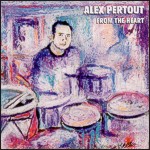 Alex Pertouts career as a percussionist has certainly been an eclectic one so far, having worked over the years as a musical director, record producer, engineer and performer, among many things, and covering areas as diverse as soundtracks, jingles, television and theatre orchestras.  His name adorns the CD sleeves of every major Australian artist, endowing him with a collection of over 140 album credits and the indisputable reputation as Australias most recorded percussionists.  Not to mention his other passion as an educator, which in recent times has manifested itself within the title of Head of the Improvisation Department at the Victorian College of the Arts in Melbourne.  Alex is also percussion writer for Drumscene (the national drumming magazine) and a correspondent for US publication Drum!  His contribution to the education literature Sight Reading: The Rhythm Book (MP Publications) for instrumentalists and vocalists now scheduled for worldwide release this month via renown US publishing house Mel Bay.  Alexs worldwide endorsements include Meinl congas and percussion, Sabian cymbals and Vater sticks.  His latest offering as composer/performer is titled From the Heart and highlights performances by a world acclaimed cast, which includes such legendaries as Mike Stern (Miles Davis), Tom Coster (Santana, Vital Information), Tommy Emmanuel, Mark Levine (Cal Tjader, Poncho Sanchez), Raul Rekow (Santana) and Hossam Ramzy (Peter Gabriel, Robert Plant & Jimmy Page), as well as local illuminaries Paul Grabowsky, Joe Chindamo (Billy Cobham), Kavisha Mazzella, Christine Sullivan, Steve Wade (Little River Band), Darryn Farrugia, Mary Doumany, Craig Newman and David Jones, among others.  Tracks Káfela and For My Father (a dedication to the late Aleksander Herman Pertout) featuring the beautiful voice of his mother, soprano Cecilia Pertout.

What have you been up to lately?  What do you consider as your main source of work these days?

AP: I have always divided my professional time between performing, recording and teaching.  And I have been performing with various ensembles  these include the Australian Art Orchestra which is led by Paul Grabowsky.  This orchestra performs in concert around Australia, and has toured Europe and Asia.  And we get to perform regularly at the Sydney Opera House, as the orchestra is a resident ensemble thats presented in concert by the Opera House several times per year.  I have also been performing with my own ensemble Alex Pertout & Friends, including a performance of two of my originals on ABC TV's Coast To Coast featuring Christine Sullivan and Joe Chindamo; with pianist Tony Gould and David Jones; and with pianist Colin Hopkins in a trio setting.  And I have been in the studio recording with various producers, including Chong Lim; tracks for Christine Anu; Shout - The Legend of the Wild One featuring David Campbell, produced by Col Joye; with a cappella ensemble Coco's Lunch; on soundtracks including The Shiner, starring Michael Caine, produced by Paul Grabowsky; La Spagnola, produced by Cesary Skubiszebski; The Goddess of 1967, produced by Jen Anderson; and jingles with Frank Strangio.  I have also been doing radio interviews to promote my latest CD From The Heart; and putting final touches on my Sight Reading: The Rhythm Book, which is about to be released internationally by noted US publishers Mel Bay in November, 2001.  I was the artistic director of The Gathering  a concert presented by the Victorian College of the Arts on at the Iwaki Auditorium featuring various artists, including Tony Gould, David Jones, Coco's Lunch, Valanga Khoza and Rob Burke.  And I have been writing my regular articles for the Australian publication Drumscene and US publication Drum!  Adding to that I have been running the Improvisation Department at the Victorian College of the Arts!  All in all not too much free time for dull moments in there!

Has it been hard to get a balance between the musical career of Alex Pertout the Percussionist and your current position as head of improvisation at the College of the Arts, or have you simply learnt to work at a faster rate?  How do the two go hand in hand?

AP: I try to pace myself, and also, choose the types of projects I get involved in carefully, in order to maximise my time.  My position as the Head of the Improvisation Department at the Victorian College of the Arts is demanding in terms of the running of the department, but in terms of myself as the musician they go hand in hand.  I mean, its a performance college, and so the place acknowledges the importance of the careers of its staff members and allows some freedom in order to keep all staff members developing as artists.  In terms of the actual classes that I take, I am always part of the ensembles that I direct as a player.  And as an educator, the research involved keeps me extremely interested in developing my skills on the various instruments I play further.  The college is such a creative environment that its inspiring for both the students and staff.  In running the department I also make sure that we have the best staff available  in terms of great players who are enthusiastic and strong educators  and I am constantly looking for interesting guests in order to keep the place alive.  Some of the department's recent guests include the legendary Joe Zawinul, Indian master drummer/composer Karaikudi R. Mani, guitarist Mike Stern, drummer Chad Wackerman, pianist/composer Paul Grabowsky and master drummer David Jones.

Your music room is an exciting creative environment, with lots and lots of percussion gear?  What has been the input of some of your current endorsements?

AP: Well as a percussionist I am forever the collector, and so it keeps growing.  As far as my endorsements are concerned I have this wonderful connections with three great companies: Meinl, a fantastic percussion company who I believe are developing some of the best rhythmic percussion instruments in the world; Sabian cymbals, who apart from their drum kit based cymbals also carry and continue to develop wonderful orchestral and new percussive sounds; and Vater, who make some of the most innovative and well-made sticks around.

How did the Meinl endorsement come about?

AP: I was approached by Electric Factory's Bill O'Meara and Lance Vadala through Frank Corniola as they were signing a distribution deal with Meinl for Australia.  As I was performing with my band at the Ultimate Drummer's Day in June, it was decided that they would organise to get some gear in especially for that performance, which was also marking the launch of my latest CD.  Meinl's Udo Heubeck came to Australia and was most complimentary of my performance, my band, my music and CD, and welcomed me as a new member of the Meinl family.  I must say that in terms of this family I am in great company with wonderful players, such as the great Luis Conte who has been developing instruments for them, including a fantastic set of timbales and bells.  And one of my all-time heroes, the master Mongo Santamaria, who was instrumental in the development of the Professional Conga Series that I endorse.  As they are expanding in its percussive line, they are also in touch with some other wonderful players, like my London-based friend Hossam Ramzy, who is developing an Egyptian tabla for them.  And they are also looking at udus (clay pots) and cajones (boxes) in the future.  The catalogue is vast and they make congas, bongos, set of bata drums, timbales, talking drums, tambora, all types of shakers including great eggs in different sizes, cabasas, shekeres, caxixis, berimbau, beautiful cowbells, some hand-hammered in copper, brass and steel, guiros and djembes.  All in all very well made products that sound great both live and in the recording studio.  And apart from the various instruments, many stands, including a sturdy and extremely portable conga stand (as it folds), which is cleverly designed.

Tell me about your latest album From the Heart.  Who are some of the soloists featured on this release?

AP: I wrote the pieces, and started recording several years ago.  As the record grew, so did the list of players involved as I contacted artists who were touring, and also many of my Melbourne-based friends to play on suitable tracks at different stages.  The record features a wonderful cast of eclectic players who played beautifully on the record.  They include ex-Miles Davis guitarist Mike Stern, Vital Information and ex-Santana keyboardist/composer Tom Coster, guitarist Tommy Emmanuel, pianist Paul Grabowsky, pianist/composer/author Mark Levine, Egyptian master drummer Hossam Ramzy, vocalist Kavisha Mazzella, Santana's conguero Raul Rekow, vocalist Christine Sullivan, pianist Joe Chindamo, vocalist Steve Wade, flautist John Barrett and drummers David Jones and Darryn Farrugia, among others.  As I recorded the album over a number of years and without a deadline, it gave me the opportunity to develop the project in the most productive and creative way.  Now the record is out and is getting attention, in terms of strong reviews and air play around.

How did you record and mix the album?  Could you explain the use of technology?

AP: Most of the album was recorded in my own studio using ADATs, except for a couple of location recordings, such as acoustic piano at Allan Eatons.  And I also used a Mackie 24.8 desk with Audio Technica and Electro Voice microphones.  I used a stereo pair of Audio Technica mikes extensively on the album.  And it was through correspondence with legendary US engineer Glen Kolotkin (Hendrix, Janis Joplin, Santana) that I discovered the Electro Voice RE-20 microphones, which have been around for decades, and are great on drums and percussion.  They were a big part of the Santana percussion sound in the early seventies, which Glen captured so well.  I started the project recording on tape with ADATs, and towards the end of the project I upgraded my PC (Pentium 3  933 MHz, 384 MB RAM) to facilitate the use of Logic Audio, allowing me to record directly to hard disk.  This was achieved via an ADAT edit card, which has 8 in and 8 out.  And so I ended up using one of the ADATs essentially as an analog to digital converter.  I mixed the album with engineer Ross Cockle with Logic Audio, and hired outboard gear including a beautiful Lexicon reverb.  The CD was mastered by Don Bartley in Sydney at Studios 301.

What special projects do you have scheduled for the near future?

AP: As always I have various projects with artists as a percussionist, but I am also currently working on a new solo release featuring percussion and voices.  The record will also feature master drummers such as Raul Rekow, Hossam Ramzy and David Jones, as well as vocalists Kavisha Mazzella, Valanga Khoza and the a cappella group Coco's Lunch.  I am extremely keen to record and release more and more of my own music and special projects.  I just need to get a little more time  There should be a few more hours in a day  Maybe I could sleep fewer hours?

'From the Heart' distributed by Vorticity Music.  Alex Pertout is endorsed worldwide by Meinl congas & percussion, Sabian cymbals and Vater sticks and mallets.  His Sight Reading: The Rhythm Book is distributed in Australia by Musos Publications and worldwide by Mel Bay Publications.  For further information visit:  www.alexpertout.com