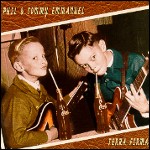 Andrián Pertout speaks with Tommy about the Emmanuel brothers' recording debut with the album 'Terra Firma'.

After 35 years, and a career that began for Phil at 7, while amazingly for Tommy at 4 years old with the 'Emmanuel Quartet', a recording debut for these two brothers seems almost incredible.  Over the years they have both individually won the admiration and respect of millions of Australians.  You have to look hard for the producer's credit on this very special project, which says a lot about Tommy's very modest and down to earth nature.  A great musician with an attitude hard to match, and a talent that needs no introduction.  Unlike other current albums, 'Terra Firma' sets out to capture the purity of real performances by real people, with little emphasis on 'high tech' studio methods.

I'm sure that everybody is more than happy to finally see this long overdue collaboration.  How did it come about?

TE: "Well, we'd been talking about doing this for a long time; But just didn't feel the time was right, until now.  I'm sure that if we'd made an album ten years ago we wouldn't have been happy with it, and it would have sat on the shelf.  I felt that we made it at the right time, and the choice of material was stuff that we both liked; And we wrote things for the album that we would never have written before."

How did you chose the material?

TE: "We wanted to put things on the album that we'd been playing since childhood, as well as things that meant a lot to us along the way.  You know, like there's a 'Shadows' song on there, a couple of sort of bluegrass tunes, an 'AC/DC' medley and a 'Mozart' tune.  So there's a bit of everything there, plus there are some original songs.  I think we ended up with about twenty five tunes, and then we honed it down into an album basically."

In a recent press release you say that the new album is really about going back to your roots.  What is the music that really inspires you both?  What did you grow up listening to?

TE: "We grew up listening to instrumental music by people like the 'Shadows' and the 'Ventures' when we were kids.  In the early sixties I discovered 'Chet Atkins', and he really changed my way of playing, listening to music and talking a lot, just through his records.  We listened to anything and everything.  In the seventies we discovered 'Eric Clapton' and people like that, and then in the eighties all sorts of people, from 'Larry Carlton', 'B.B. King' and 'Stevie Ray Vaughan' right through to 'Steve Vai'."

Who else was on the album?

TE: "The band on the album is the guys that play with me.  'Kevin Murphy' on drums, 'Rob Little' on bass, 'James Roche' on keyboards, and 'Broderick Smith' played a bit of harmonica on a couple of tracks; And 'Joe Chindamo' played the accordion on a song called the 'Ashoakan Farewell'."

What equipment are you both using these days?  What guitars did you use on the album?

TE: "We used mainly our 'Fenders' for the electrics.  Phil used his 'G&L' a few times, but mainly his 'Fender Strat', and I used various 'Telecasters'.  Acoustics were 'Matons', and a couple of times I used my 'Robin Moyes' acoustic.  On the track '(Back on the) Terra Firma' there's a Spanish bit that happens twice in the song, and that's a 'Maton' classical."

Tommy, I hear that you're moving to San Francisco.  What are you planning to do there?

TE: "I'm going to be based there, to work the rest of the world, out of San Francisco.  I'm moving my family over, and I have management set up from San Francisco to handle Europe and America."

Your project with the Australian Philharmonic Orchestra.  When will the CD be out?

TE: "At this stage it looks like October.  I'm actually finishing it off this week.  Tomorrow I start, doing some of the final guitar bits.  The orchestra sound fantastic!"

Where to from here?  What is installed for us in the future?

TE: "Well, I've got this tour coming up with Phil.  We'll start rehearsals on the 26th and the first show's the 31st.  We tour right up to the 17th of April, and then I'm going to Sydney to cut a duo album with 'Slim Dusty', who was another one of my inspirations when I was a kid; Just his simple songwriting and great melodies, good words to his songs.

"So I'm doing that, and then I'm packing up and going overseas.  I figure that it's time that I dedicated myself to spending more time overseas.  You know, I think the Australian public probably need a break from me.  I've just had such incredible support; And I've had a dream run, I just don't want to overdo it.  I want to go away and come back with a whole new thing for the people here."