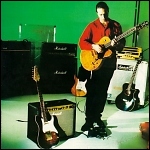 Andrián Pertout speaks to Simon Patterson about life as a guitarslinger for hire and Marshall clinician.

Simon Patterson has been a member of the Hey Hey Its Saturday Band since 1990, and in this time has strummed his guitar for a countless number of acclaimed national and international acts.  Some of the invited guests on the show have been James Morrison, Randy Crawford, Deni Hines, Chubby Checker, Martin Taylor, Paul Grabovsky, Eartha Kitt, The Commodores, Lou Rawgs, Bonnie Raitt, Jackson Browne and Roger Daltrey.  He has also participated in live and recording sessions with Darryl Braithwaite, Kate Ceberano, Deborah Byrnre, The Lovers, Tommy Emmanuel and Marcia Hines, as well as on numerous soundtracks.  In 1995 he released an album with drummer Darryn Kamal Farrugia, bassist Craig Newman and keyboardist Kath Wood, titled Chainsaw Fantasy, under the banner of Venice Beach.  Simon Patterson has also been the Marshall clinician for Australia since 1993.

SP: Well, my mother bought a guitar, neither of my parents are musical, she suggested if I wanted to get guitar lessons.  It was as simple as that, and that was around the age of nine.  And that started out fairly precariously, as most people do, and as I got more into it, it sort of became a bit of an obsession I guess, you know, just really into it.

SP: Initially I was really attracted to things like the Shadows, Angus Young, some Hendrix sort of things.  That was earlier on, and then a lot of the jazz players.  By the time I was about fifteen or sixteen I was really interested in bee bop, so I was looking at people like Joe Pass, John Farlowe, Wes Montgomery, George Benson, then some people like Lee Ritenour, Pat Metheny.  And after having a few local teachers in Geelong, I got some lessons at Bruce Clarkes Studio in Melbourne.  So I was pretty keen on pursuing the jazz thing, I dont know why, my father had an interest in jazz I guess.  He was very into Oscar Peterson and Django Reinhardt.

Did your studies at the NSW Conservatorium have any effect on your musical direction?

SP: Yeah, it did have a large impact because I was studying with people like George Golla, Mike Nock, Roger Frampton, Don Burrows, and so forth.  That had a big effect, because there was a lot of pratical sessions, and getting to play at least four or five times a week, with people of that calibre.  With like minded people too, doing the course, made a big impact there I think, definitely.  While I was studying there I was doing a lot of different gigs as well, I did some stuff with Kate Ceberano, a Bushwackers tour, various sessions and cover bands.  The general mixture of things most Australian musicians have to do, to make a living.

SP: I was fortunate, I started straight away doing bee bop gigs when I was about seventeen.  So I was very fortunate to play with older players than myself, who were more experienced and better.  I probably consider that a real break, because it gives you that kind of confidence.  I guess Hobart was kind of good at that stage, because it had a lot of good ex-Sydney players down there, so you probably got opportunities you mightnt have got elsewhere.  So that was a break in a sense, definitely made some contacts there, which followed on to people like Ross Burton.  The association with people like that stemmed from opportunities in Tasmania.  I guess things like Kate Ceberano came by the Sydney Con, on two different occasions she did a run of jazz shows at the Hilton, Sydney.  Being at the Con, guys often needed people to fill in.  Peter Northcote, whos a well known Sydney session player passed on quite a few things to me.  So a lot of its by referral, the Hey Hey gigs evolved by playing with people like Darryn Farrugia and so forth.

Do week to week appearances on Hey Hey Its Saturday present any kind of pressures for you, or has your six year residency moulded a comfortable role for you?

SP: You never know what youre gonna expect.  I mean, live TV is really is the hardest thing for any musician, because youve gotta contend with everything really.  The audio is operating at a recording level, yet its a live gig, it goes out to a big audience.  You never know what youre gonna have to contend with.  It might be something really easy, it might be something really cool, but occasionally therell be some really hairy sort of things that come up, which require a lot of reading, and youve just gotta grit your teeth.  We dont get too much notice with whats happening.  Sometimes, like Bonnie Raitt and Jackson Browne were on the show, we backed them this year, so we were given tapes prior to that, same with people like Roger Daltrey from the Who.

Tell me about life as a clinician.  How did the relationship with Marshall and Yamaha initially come about?

SP: Well, Ive been with Marshall now for three years, and that association I guess came by Hey Hey, I mean, doing a profile gig.  I had done some clinics for various other people prior to Marshall, so I was known as someone who could do that sort of thing.  An opportunity came up with the Marshall structure for an other clinician, so I guess I filled that role.  Its been really good, theres been trade shows in Sydney and Melbourne, I put bands together for Jim Marshall this year.  Jim Marshall came out, did a tour of Australia, I flew over to Perth with Jim, judged a guitar competition, and performed there with Dave Hole and various other people.  Ive travelled right around the country virtually, doing Marshall clinics.  Its been great, I mean, Marshall, I guess is one the largest names in rock n roll, and contemporary music, as far as equipment, so thats been very, very good.

Tell me about the equipment that you are using these days.

What is Venice Beach and its members up to these days?

SP: Well, everyones been very busy.  The CD Chainsaw Fantasys been out for a year and a half now, I know Darryns done a big clinic tour, Craigs off doing a lot of different things, as is Kath.  So its been kind of hard to get everyone together to do any gigs, and its not the kind of music where theres a huge market for, so you have to be selective, I guess it sort of sits somewhere in the middle between a jazz and a rock kind of crowd.  We did some shows at the Evelyn earlier this year, and they were a lot of fun.

Out of your various working environments, do you prefer the stage, television or recording studio?

SP: Theyre each really good for different reasons, I guess TVs something you do become comfortable with after having done it, but theres always an element of surprise with TV, I find.  You never quite know whats gonna come up.  Most musicians would generally prefer live gigs, so definitely, I mean, you get to play songs completely.  Often we might only do a thirty-second play-on or play-off, with the TV thing, so you dont get to perform as much, play right through.  Recordings wonderful too, cause it presents different challenges, youre really focusing on tone and your time, all those different things, and coming up with parts for perhaps an original thing or just trying to play at your optimum, so its really under the microscope.

What other projects are you involved in at the moment?

SP: Well, let me see, at the moment theres some plans for some writing, towards perhaps a solo thing or a band project.  Ive been involved with band called The Lovers, done some stuff this year, I think theyre in the process of writing and recording a new album, theyre on Farnhams label.  I think your brother Alex is quite involved with that too.  Definitely a lot more plans for clinics next year, but Ill certainly be looking at trying to do some recording that would cover a few different styles, jazz, r n b, blues, that sort of bag.  Not strictly fusion or metal or anything.