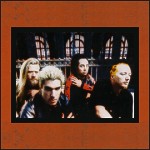 Andrián Pertout speaks to vocalist/guitarist Robert Flynn from San Francisco about the heavy nature of the Machine Head sound.

The signing of Machine Head must have been swiftly celebrated by Roadrunner label heads after the bands offering of Burn My Eyes was pronounced as the highest selling debut in the history of the company.  The epithets arising from their musics labelling as the new form of powerful, extreme music bringing about an ongoing challenge for the metal heroes to evolve, which is certainly one challenge that has been met with a vengeance.  The Burning Red represents the latest from Machine Head, and as well as featuring the sonic inducements of vocalist/guitarist Robert Flynn, guitarist Ahrue Luster, bassist Adam Duce and drummer Dave McClain, the album presents the masterful direction of award winning hard rock producer Ross Robinson and mixing artistry of Terry Date.  Highlights must surely include the passionate rendition of the Police classic Message in a Bottle and the awesome power of From this Day.

How did the Machine Head concept initially come about?

RF: Were from the Bay area, and when we got together, which was like in the middle of 92, the Bay area was just coming out of that horrible funk craze that swept the nation.  The Primus, Faith No More kind of wear, lycra bicycle shorts and slap-your-bass-around wear (chuckles).  And we hated that, we thought it was terrible, and it wasnt so much that we hated the two particular bands, it was just all the other bands that popped up around it.  And you know, no one wanted to play heavy music anymore, and so we decided to start playing heavy music, incorporating elements of like hip hop, melody and hard music, trying to do something that we hadnt heard before and something that definitely was not happening in this city.  And that was really our motivation.

And what do you regard as one of the main reasons for the bands success?

RF: I think we definitely had a couple of lucky breaks, but we really tried to break some new ground, and write some tight, fresh music that no other bands were doing.  And I think just a lot of hard work and determination really, a lot of constant touring, and a lot of drive to go out there and make it happen.

The music of Machine Head demands a very extreme vocal technique.  How do you maintain the voice on a day to day basis, and especially during touring?

RF: Usually a good glass of vodka before I go out and play helps loosen up the old vocal chords (laughs).  I do a kind of a warm up, but Ive never actually had training or anything like that.  I warm up to like a CD and just stretch out my muscles, and then go out there and do it really.

I suppose not just in your style of music, but even in softer styles, vocalists in general find it really hard to keep it up, especially doing a few gigs a week?  Do you look after yourself in any special way?  You know, some singers wont even talk during the day before a gig!

RF: I dont go through all that kind of ridiculousness, but I do try and eat like pretty healthy, get a nights rest, and really not much more than that.  But you know, I pretty much know my limitations, like I know that if Im starting to get drunk, and that if I continue to get absolutely wasted, the next day is gonna be a little bit rough on the vocals (chuckles).  So I know my line.

Tell me about your guitar set-up.  What kind of gear do you use?

RF: Both me and Ahrue use Peavey 5150s, the EVH model, not the signature series, and we use Marshall cabs.  I have Gibson guitars, a Gibson SG, a Gibson Flying V and a Gibson Explorer, a Jackson Strat and an ESP Strat.  Im also getting an ESP Rockstar!  You know, a star-shaped one.  And then I also have an Ibanez piece of crap (chuckles), but the first Burn My Eyes record was recorded with it, and so it has this kind of special place in my heart.

What sort of Ibanez is that?

RF: I dont even know, but its gotta be the cheapest Ibanez ever invented.  And Dimebag Darrell actually gave me a copy of one of his Dean Lightning Bolt guitars, which I actually dont really play too much, but its a cool gift.  And Ahrue has kind of the same thing, hes got like Gibson SGs and ESPs.

And what about as far as tunings, effects and pedals?

RF: Weve always tuned down to like B, its like a drop tuning with the top string.  The top string is tuned down like a full step, and the power chords are played with one finger on the top two strings.  But then the rest is normal, and normal to the rest of the guitar, because weve tuned everything down like five steps.  And as far as like effects go, in the studio we had like literally a mountain of pedals from the seventies and early eighties, and we basically did things like put ten of them in a row and then see what the sound is like.  And to capture some unique and individual sounds that we had never heard on a record before.

The sound of your latest album The Burning Red is seriously intense.  Is it a reflection of your own future direction, as well as hard rock in general?

RF: I definitely see this as the direction of hard rock, and heavy music in general.  You know, I think this record has taken this style of music to a place that it has never been before, where no band has gone before.  And I think its really gonna change the way stuff is.  Im really happy with the way that everything came together, from like the hip hop, the melodic, to the heavy stuff.  And to know that there are already bands that are starting to kind of borrow from the sound that weve created, whenever I hear them, its like the sincerest form of flattery.

What was the main source of inspiration for the lyrics?

So what kind of topics do you usually touch on?

RF: A lot of kind of believe in yourself type of lyrics.  You know, follow what your hearts telling you, and stuff like that.  And personal problems, in a lot of ways dealing with stuff from my past, or just talking about Machine Head.

How do you generally approach songwriting?

RF: I write a majority of the music, and I write all the lyrics, but Ahrue also writes a good chunk of the music.  But generally, he or I will bring a riff into practice and well sit there and jam it out until we feel that weve got a good beat or whatever.  And then we keep on jamming on it until it evolves.  And in this particular record there was a lot of writing and re-writing going on, where we were really trying to like fine tune all of the riffs, and really focus on what was best for the song, taking out unnecessary parts, so really just trying to make the song have a definitive flow and conciseness.  That was the main focus, just trying to weed out all the little crappy riffs here and there.  And Im really happy with it, theres a lot of spontaneity, and it came out very good.

And do you start with a lyric, music or both?

RF: Nine times out of ten its with the music, but every once in a while I have a melody first, and then I write the riff around that.  And in the past I really used to make sure I had all the lyrics kind of written, and then go in and try and fit the lyrics into the song, or for a good part of it, but with this one I really wanted to take a different approach.  I really wanted to basically try the opposite, and at first it was a little challenging, because I had kind of gotten used to doing things a certain way.  But what I did is write down like a few lines and then take it practice and just kind of see what comes spontaneously out of it, and then try and build lyrically and idea wise everything into it.  And Id never really done it like that in the past, it definitely was a lot more rigid, but this really opened up a lot of ideas for me because it didnt put up any boundaries.  So I really liked it, and Im not saying that its for everybody, but for me, this particular time, it worked out pretty well.  And I think you hear it on the record.

What is your perception of the hereon for Machine Head?

RF: Platinum!  Friday were going out on tour.  Coal Chamber and us are going to be doing a Coal headliner, and were gonna be taking out Slipknot and Amen throughout the States.  And hopefully be coming down to Australia, as soon as possible, hopefully by the end of the year.  Im really looking forward to getting back there again, because last time we played there was drunken mayhem and lots of fun.

And are you already thinking of the next thing you want to do?

RF: Umm, the record just came out today, so were still just kind of happy with that right now