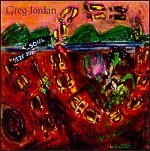 The actual listening experience is melodically adventurous and lyrically soulful, with occasional wanderings into almost Celtic acoustic spectrums.  Outback Road opens the door to a melancholy journey of tales for the common man, artistically projected by the conventionally smooth and yet daringly raw vocals of Greg Jordan.  His guitar and mandolin soundscapes are further supported by the fretless crusades of bassist Rocco Mesiti and bowed escapades of violinist Peter OShea, as well as the brush parades of drummer Bill Paskalis.  The sonically wholesome Romeo and Juliet then provides the impetus for a non-ephemeral future Greg Jordan devotee.  Size 10 Soul essentially captures the organic energy of this forgotten hero, and in the Greg Jordan tradition elects to drown in deep water rather than float on the safe ground of bubbly pop music.  The prolific songwriter shines through yet again, but this time with a message for the 90s.

"I actually haven't released one for quite a few years, and I basically went and got myself a real job, making furniture for eighteen months to buy some recording gear, so that I could do my albums at home," explains Jordan.  "And it was kind of fairly intense because I was mixing, engineering and writing it myself.  I also played a lot of it, so it was mainly a one-man show."

His ambitions for the project have been humble, although with a strong goal of making his music a public commodity.  "That was something I didn't think about while I was writing it," says Jordan, "But in hindsight I could say that what I have achieved is something that I'm pretty happy with, and something that I would like a lot of people to hear."  He then adds, "But it's not for me to judge, you know, I don't know if it's good or if it's just ordinary."

With regards to approaching record companies Jordan remarks, "I dare not think of the past these days, especially the major companies.  But I think distributors are another matter." He continues, "I'm not really interested in big record company dollars for advertising campaigns, and doing all the chat shows and stuff.  That obviously is getting to a bigger crowd, but 'at what price?' the artist must ask himself.  I'm not prepared to pay that price, I'd rather have total control and do it myself."

"I obviously would love to get around the world," he says of his current plans, "So I'll probably end up hooking up with a distributor of sorts, and just get on the folk festival circuit or gig scene and play to as many people as possible, 'cause I really enjoy performing music.  I enjoy playing, I enjoy singing."

Greg Jordan: A Return to the Celtic Heartland
Stinky Taylor: Live at the Rose of Australia