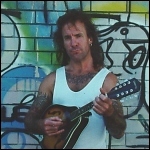 A Return to the Celtic Heartland

Greg Jordan, co-founder and main songwriter of 80's cult band the 'Asthmatics', began training his musical ear by playing the banjo at the age of thirteen. In 1983 he went on to join Angry Anderson and the legendary working class heroes of 'Rose Tattoo', where he mesmerized audiences Australia wide with his intoxicating slide guitar playing. He also made a mark with his song writing talents on their fourth album 'Southern Stars', leaving a quadruple contribution. Although acquiring a sound foundation, the search for his own identity led to the demise of his commitment to the band, and the formation of Sydney funk institution 'Paris Green' in 1985. This setting facilitated the cultivation of his own blend of protest pop poetry, melodic guitar harmonizations and rhythm & blues.

A new found genre led to the release of the 'Raw' solo album in 1988, which incidentally was composed and recorded in several days, a stylistic signature of his spontaneous artistry. The early 90s progressed with new directions and a tour of UK jazz clubs with saxophonist Louise Elliot, enunciating his 'no rules' approach. He later founded experimental trio 'Introduction to Mathematical Philosophy' which featured works of Australian poets over jazz-metal soundscapes. Then in 1996 his dream took a new turn when he joined the 'Hooligans', an original outfit performing music based around Celtic folk-rock routes. This metamorphose came about as a natural progression, as it was merely a call of his traditional Irish ancestry, and a return to the kind of free spirited music that initially inspired him to be a musician.

The 'Hooligans' have a debut album out that includes Greg on vocals, acoustic, electric and slide guitar; and features Ben Flood on vocals, tin whistle, banjo, mandola, fiddle and guitar; Linzee Prior on vocals, bodhran and bass; and Quentin Lydall on vocals, bass, mandolin and tambourine. In late April they depart for a world tour that will see them perform in New Zealand, Singapore, London, Dublin and Scotland, with a view to a later invasion of the European continent. Greg is also currently working on a solo project that will feature his fretted skills, as well as the musicianship of various muti-cultural improvisers. Greg Jordan is a talent unearthed, a guitar virtuoso with incredible invention, and no doubt one of the most innovative and interesting guitarists in Australia today.