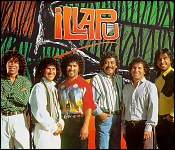 Andrián Pertout speaks with Illapu's musical director Roberto Marquez Bugueño from Santiago, Chile about their music, their life in exile, and their upcoming tour of Australia.

Illapu were formed twenty-six years ago in Antofagasta, Northern Chile, and today are one of the country's most celebrated popular groups, with a discography of fifteen albums that has so far yielded seventeen platinum awards. Illapu, which incidentally means 'lightning bolt' in the indigenous Inca language of Quechua, have enchanted audiences all over the world with their animated blend of traditional Andean folk and contemporary popular music. The universality of their music has led them to tour over forty countries in five continents, with memorable performances in such world renowned venues as L'Olympia in Paris, Carnegie Hall in New York, Teatro de la Ciudad in Mexico City, Alte Oper in Frankfurt, Royal Albert Hall in London and the Concert Hall in Melbourne. Illapu have also made their presence felt at international music festivals, like that of Helsinki in Finland, Perth in Australia, Nyon in Switzerland, Lieder Sommer in Germany, Le Puy in France, Acapulco in Mexico and Cosquín in Argentina. Their music features the rich vocalizations of its six multi-instrumentalists, with the accompaniment provided by a vast array of instruments that include the Spanish guitar, charango, Venezuelan cuatro, Colombian tiple, bandurria, 12-string guitar, electric bass guitar, zampoña, quena, quenacho, moxeño, pinquillo, sicura, rondador, ocarina, alto saxophone, soprano saxophone, flute, trutruca, bombo, Peruvian cajón, bongo, tumbadora, cencerro, huiro, pandero, claves, matraca, cascabeles, chachas, trompe, caja, tom and electronic drums. In April the group returns once again to the 'Great Southern Land', and in conclusion this visit will no doubt be appraised as Illapu's fourth successful Australian tour.

Tell me about the birth of Illapu. What was the main inspirational force behind its foundation?

RMB: "Illapu, which in Quechua means 'lightning bolt', was formed in 1971, dedicating ourselves firstly to the salvaging and compilation of Andean folklore, and starting from that base, to the creation itself."

How would you describe the blend of traditional and contemporary music that you perform? What is the origin of the rhythms and the instruments used?

RMB: "We utilize instruments of Latin-American origin, like the Venezuelan cuatro, the Peruvian cajón, the quena, the zampoña, as well as the electro-acoustic guitar, the flute and the saxophone."

Your Latin American audiences respond overwhelmingly to the message contained in your lyrics. Do they have a cultural significance or are they inspired by universal themes?

RMB: "The lyrics in our songs are based on the conflicts and the problems of mankind, especially those of Latin America and the Third World, which remain unresolved. For example, we touch on the theme of the shelved youth, the abuses of the free market, among many."

In 1981 the military regime of Chile censured Illapu, forcing the group into exile. What led the government to adopt their hostile views?

RMB: "The truth is that we were exiled not only because of our musical activities, but for the link to the 'Vicarage of Solidarity', with the great number of the unemployed, with the soup kitchens for children. In that period many activities of solidarity took place, we were a summoning element, a lot of people used to get together under the umbrella of our music. Even though at that time it was difficult to say things openly, the people were aware of the message and it was possible to establish a good communication."

How did this period of exile in Paris and Mexico City effect the psyche of the group?

RMB: "It was very hard for us to be expelled from our own country, but we always maintained contact links with Latin America. From our exile in France, where we lived almost inside a bubble, we went to Mexico, an audience closer to us. But the exile was very demanding, in the way in which it made us grow professionally."

After the collapse of the military regime in 1988, Illapu returned to settle in Chile. How would you describe the performances to crowds of over 100,000 people that followed?

RMB: "The re-encounter with a great number of important people, allowed to fully penetrate the country, besides it made us feel that people still followed us."

In the last twenty-six years Illapu has toured over forty countries on five continents, gaining an international following. What do you regard today as the main factor contributing to the immense global appeal of the group?

RMB: "The fact that we utilize elements from Latin-American cultures, the richness of the rhythms, of instruments and themes, in addition to the fusion of our music with the popular, the classical, the jazz, are the factors that create a following in a great part of the world."

Tell me about Chile and Latin America in general. What is the music scene like there?

RMB: "After the cultural blackout imposed by the dictatorship of Pinochet, a rebirth came and new groups surfaced who readopted the spirit of the 'New Chilean Song', linking one era with an other."

There are three double passes being given away to an Illapu concert of your choice, for the first three correct answers to the questions: What continent is Chile located in? What is the capital city of Chile? What is the official language of Chile? Send your entry in to C/- The Editor, Mixdown Monthly, 3-5 Jessie Street, Richmond, Victoria 3121, Australia.