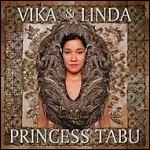 Originally, Vika and Linda were better known for their time with Joe Camilleri and The Black Sorrows, but the 1994 release of their self-titled debut album launched a career in their own right.  Last year they performed throughout the world with the International WOMAD festivals, and for the cultural inspiration of their new album Princess Tabu, also included a Pacific tour.  On this return to Tonga they were encouraged to perform for King Taufa'ahau Tupou ahead of any other engagements.  Vika and Linda then went on to co-write most of the material for this new album in collaboration with Paul Kelly, Tim Finn, Barry Palmer, Michael Barker and Diesel.  If talent alone is the key to a long and successful musical career, well then these sisters will surely shine through, but with an added bonus, a natural charm that's bound to overwhelm.

Tell me about your new album "Princess Tabu".  What is the story behind the title?

LB: "The title was inspired by fairytale, it's like a fable about two twin sisters.  Their mother died in childbirth, and they were separated for ten years, and they grew up alone, and apart.  One was called Princess Ta, and one was called Princess Bu.  And they missed each other so much that they flew up in the heavens, 'cause they were raised by falcons, looking for each other.  Their vision was blurred, 'cause they were flying so high, and they crashed, and when they crashed there was lightning and thunder, and they fell to earth, and fell in the sea.  And when they came out of the sea they were one person, Princess Tabu.  She walked into her village, where she was born, and spoke, and everybody listened, the birds, the people, and the animals, she had everyone's attention.  And she said, 'I'm the Princess Tabu, and I'm here to take care of you.'  And that's what we use as the inspiration for our song and for the album title."

Great, great story!  How did the collaboration with Jeremy Allom and Diesel come about?

VB: "Ummm, with Diesel, he heard the first Vika & Linda album and really liked it, so we rang him up and said, 'How about we get together and do some songwriting?', which we did.  And then from there he went on to co-produce four tracks on the album.  With Jeremy Allom, he came along to a gig in Sydney, and saw us perform, and we met him.  He's got a lot of experience, you know, he worked in England for years, and mixed a lot of like famous albums, like the Massive Attack Blue Lines album and..."

VB: "Chaka Khan, and all that sort of stuff.  So he ended up co-producing the rest of the album with me and Linda."

What was your approach to the music?  Was there a general theme?

VB: "No, not really.  We wanted to get it kind of like a Polynesian type feel like in the rhythms and things, especially the way they play their drums, and the harmonies, the way they sing.  We co-wrote every song on the album, but when we sat down we kind of just did what felt good on the day.  A lot of the album's written about personal experiences, things that have happened to us."

How did you chose the material and the various songwriters involved?

VB: "Ah, they're just people that we'd worked with in the past, and that we were comfortable with.  And we were fortunate enough to have like Paul Kelly and Tim Finn help us.  You know, they're quite good at writing songs and... (laughs)"

What was your lineup on the album and how will that differ with the lineup in your up and coming Australian tour?

VB: "The people that we used on the album are the people that we use in our band.  It's just a basic kind of thing, drums, guitars, bass and keyboards.  So we use that in our live lineup, except we had like a few different guitar players, like Diesel played guitar on a few tracks, a guy called Stuart Fraser, he played guitar on a few tracks.  Michael den Elzen and Jeff Burstin who's been playing with us for years."