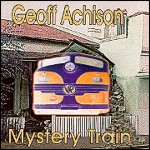 Andrián Pertout speaks with Geoff Achison about the nature of the blues and his new album Mystery Train.

In the Victorian country town of Malmsbury, eleven year-old Geoff Achisons destiny is bestowed upon him after a magical encounter with his mothers old guitar under the stairwell.  After a brief period of secrecy, his natural passion for the instrument is discovered and initiated hereon is a musical journey of exploration and discovery, leading ultimately to his loyalty to the blues.  Doubtful about fulfilling many of his aspirations in his hometown, he moves to Melbourne where in time he is recruited as lead guitarist by prominent blues artist Dutch Tilders.  On the conclusion of a five-year association with Dutch, Geoff embarks on a solo career with the release of his debut album, Big Machine, which becomes the 3PBS FM Blues Album of the Year in 1994.  The industry blessing continues with the Melbourne Blues Appreciation Society Blues Performer of the Year award in 1995, followed by an invitation to represent Australia at the 12th Annual International Blues Talent Competition in Memphis.  Up against twenty-three electrified bands, Geoff still manages to charm the judges in Memphis with his unique Australian style and is presented with the Albert King Award for the most promising guitarist.  He is later further rewarded with a Gibson USA endorsement, which in fact makes him the sole Australian Gibson endorsee.

How did you initially develop your love for the blues?

GA: "Probably just on that first moment that I heard blues guitar, it was the guitar that turned me on, the electric guitar.  That first moment of hearing it played in that way, just the way the notes go together over a blues, it just excites me, it gets my adrenaline going.  Its just the power of it, I always thought it was so much more powerful than even some of the heavy metal records I had, its just rawer, you cant hide in it, theres no safety net.

What sort of people were you listening to?

GA: "The first guy I heard was Clapton, so he introduced the whole spectrum of blues playing to me, and I started to read about him.  The next big influence was Freddie King and Albert Collins, they were the first two black guys that I heard playing.

For African-Americans early in this century the blues was an expression of their struggle in society.  What is your opinion on its meaning today?

How would you describe the atmosphere at the 12th Annual International Blues Talent Competition in Memphis?

GA: "It was amazing!  Cause it was a competition that I was at there, youd expect it to have been competitive, but it wasnt at all, it was just the celebration of the music, everybody was there because they enjoyed this style of playing.  It was a very friendly, very open thing.  I got told before I went over there, You know, Americans wont like you because youre a white boy from Australia and youre playing their music, and they wont like you doing that because its theirs.  And its not true at all.  You know, like if youre a blues player in a blues town, wherever youre from, especially if youre a foreigner, theyre really flattered by that, because its such a cultural thing to them, so its like youve taken the time to study their culture.

Tell me about the musicianship.

GA: "Much the same as here, I suppose different levels of it, cause people are people, wherever you go.  So youve got some people that pick up an instrument who never quite progress on it, youve got other guys who play professionally and can play in a number of different styles, and then youve got your monsters!  Probably the only difference that I could really see is that its quite easy to immerse yourself in blues music in America, or jazz, or whatever, because its there.  In Australia, if you just wanna listen to blues, youve gotta surround yourself with it and create your own environment, because youve got all this other music that youre going to hear as you walk down the street.  So theres people there who will only ever hear blues music, so theyre really f good at it, but theres no outside influence.  Im sure that one of the things they liked about me is that I was playing things in a blues box that came from elsewhere, because I hear dance music, and I hear flamenco, reggae, I love all that stuff as well.  Thats something that Australian musicians have over people overseas, weve got everything here, its that multicultural melting pot.

What effect has winning the Albert King Award for most promising guitarist had on your musical career so far?

GA: "(Laughs) Wow, gee, its probably effected me personally from the point of view that it was like getting my diploma.  It was like going over there and getting a conformation that, Yep, youve done it right!  Cause like studying something from the other side of the world, and knowing that I had this romantic view of it, its just one of the reasons why it was important to actually go there and check it out for myself.  Its made me comfortable with starting to branch out into other areas that I can explore, cause I feel that, Well, Ive got this blues thing down, and now Ill always have that.  So now Im getting into rock n roll, you know, just different music forms, and being comfortable and applying my blues playing to that, just trying to develop my style.

Tell me about your new album Mystery Train.  How did you record the album?

GA: "Very simply, very rustic setting.  It was through a mate of mine called Mick Ahearne, who lives in Harcourt.  We were thinking about doing one for some time, but we were a bit loathed to go into a clinical little studio, it was gonna be really hard to find the right studio, because so much of what I do is made up on the spot, as blues and jazz is approached.  And this guy had a shed out in the middle of the country, and he actually had a loan of a recording machine at that time.  He runs PAs for a living so he had desks and all that sort of stuff.  So he said, Oh well, come down and spend a couple of days here itll be good to see you!  So we just set up in Micks shed, it was September, it was pretty cold out so we had the pot belly stove going, we were nice and warm in there, a couple of beers, and just went for it, just laid it down.