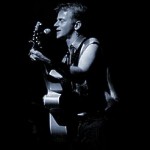 Andrián Pertout speaks to Geoff Achison about his new album Getting Evil, and his current status in the international blues scene.

When Geoff Achison sings, Ill play guitar man, Ill shoot for the stars man  And this guitar that I use is gonna play these blues until I die, you believe him, and not just because the Blues Man walks artistically well dressed, but because for Geoff Achison, these words spell out a lot more than a mere love for his job, for him guitar playing is akin to a crusade of the soul.  Since the initiation of his esteemed solo career in the mid 90s, his talents have presented him with a notable Gibson USA endorsement, as well as with the 3PBS FM Blues Album of the Year award for his debut album Big Machine in 1994, the Melbourne Blues Appreciation Society Blues Performer of the Year award in 1995 and the Albert King award for the most promising guitarist at the 12th Annual International Blues Talent Competition in Memphis.  Geoff Achisons latest album Getting Evil was recorded with the US Souldiggers in Portland, Oregon, and includes the input of bassist Timmer Blakeley, drummer Don Schultz and keyboardist/harmonica player Alex Shakeri.

What is your music essentially about?  Is audience perception important to you, or are you more about simply expressing art?

GA: "No, certainly, the audience perception is important, but probably more from the point of view of having spent the last twelve years making a living as a musician.  And if the audience doesnt like it, I dont get asked back to the gig, and I dont get paid.  And then I cant live, it comes down to that.  So I generally pick material and perform in a way that I hope people are going to enjoy it enough to come back next week.  And theres the added thing of hoping theyll buy a CD at the end of the night too, cause if I dont sell any CDs, I dont get to make any more.  So you dont wanna disappoint people, but its not as simple as just living for the art, and being an artist for arts sake, thats not what Im about.  Id love to be like that, but thats an ideal which doesnt really exist in my world.

How would you describe your own blues derived guitar technique?

GA: "Well, I can tell you where it comes from, and what I aspire to be.  My first introduction to that music was through the guitar playing of early Eric Clapton and Jeff Beck, and more importantly Freddie King and Albert Collins, those old blues guys, cause they were the first real blues records I ever bought.  And I taught myself to play off Freddie Kings Texas Cannonball album, so I suppose Im still trying to play like Freddie King, but I really cant do it (laughs).  My playing is derived from that, but it probably sounds a little different, because I cant do what I wanna do properly.  I was talking to DJ Mark Doherty in Brisbane last night, and I dont know where the quote comes from, but it was something like, Most of the new music which has been introduced to the world has been the result of somebody trying to play a previous music but not succeeding. (laughs)  And thats probably pretty accurate.  The best way that I describe it is that Ive learnt to play music from blues records, but what I do is also influenced by whats around at the moment and who I play with.  But what Im trying to be is a good blues player.

Tell me about your personal collection of guitars, effects and amplification.  What kind of other accessories do you utilize?

GA: "Im a pretty organic player from the point of view that my electric set-up is just my old Les Paul, plugged straight into the amplifier.  I never had money for effects when I started playing, but I did develop a couple of techniques for emulating octavers, phasers and tremolo kits.  And in the little scene that I used to play I got a little bit of notoriety for, Oh man, you can make these sounds without any pedals!  And the day that I did take a wah-wah pedal to the gig I had a couple of people come up and complain, because theyd bought a few people along to see this bloke who didnt play with effects (chuckles).  And this was in the eighties, when everybody had their effects and everything, and being the little nerd I was, I took that seriously and never brought it along any more.  So its just become my thing not to use them.

But that old Les Paul that I mentioned was one I bought in 1985, it was my first professional instrument, and it was the first Gibson I ever saw in a shop for sale.  Id just got a job in a plastics factory, and it was near Christmas, and I had been given my vacation money.  And so I had like $600 bucks in this large sum, and a few hundred bucks saved up.  So I went back to this shop and traded in my little early 70s Ibanez copy for this Les Paul, and starved for the next six months!  That has been my main axe ever since, and shes beautiful.  And then Ive got a couple of acoustic guitars which I got off Gibson in the States last year.  I went up to the factory in Montana, and after a grand tour they sat me in this room, and it was just guitars all around the walls.  And my mate there, Robi Johns, hes like, Well, you just pick a couple there that youre gonna be happy with.  We want you to go away a happy man.  (Geoff imitating his American accent)  And hes just bringing guitars, one after another, with me saying, This is really nice, and him saying, Oh, try this one, you might like this a little better.  And I spent a few hours there doing that, like a kid in a candy shop.  Its like all my Christmas had come at once, it was great.  So now my stage axe is a big blonde, Blues King Electro Gibson, and Ive got a Gibson J-45 flat-top acoustic, which Ive just kept, with no electronics, no cutaway or anything, thats my studio and lounge room guitar.  And thats my rig.

How did you approach the guitar playing on Getting Evil differently to your previous release of Mystery Train?  What effect did the inclusion of the Souldiggers have on your performances?

GA: "Well, I played with the band for years, and I still consider that my main push is to put a band together and go out on the road.  Thats what I love to do more than anything else.  The acoustic set has sort of taken me by surprise a bit, cause I started doing it to just earn a little bit of extra money through the week.  But its been really well received, so thats great, and its opened up a whole new area for me, so I now I treat the acoustic and electric guitars as two totally different animals.  I dont play any of the same material.  Theres the acoustic repertoire and theres the electric repertoire.  But I am getting to the stage now where Id like to marry the two, for certain songs at least.  And the title track from the new CD Getting Evil is one that even though I play acoustic guitar on it, it just doesnt work solo, it has to have the band, whereas Adam & Eve I can play solo.  But eventually all the shows I do will have a good mixture of the two, the acoustic set and then slowly into the electric sounding things.

After winning the Albert King Award for the most promising guitarist in Memphis not so long ago, is the United States now a part of your long term plans?  I hear you are heading back there to be a guest instructor at Jorma Kaukenens Fur Peace Ranch.

GA: "Oh, definitely.  Yeah, I did that gig last year and it was great, and Ive been invited to do it again this year, so Im just trying to work out a trip around it.  But Im looking at my future in the world really.  I still consider Australia to be the most desirable place in the world to live in, but the market here is very small, which is very unfortunate.  The thing you notice in the UK, Europe, or in the States is that generally when you go out and play in the bars, in these local blues clubs and so on, you notice that most of the really good players have all gone on to bigger and better things.  And in a way that sort of gives us an edge, people like myself, Jeff Lang, Gwyn Ashton and other Aussies that have gone over there, starting in these clubs.  I think that we have an edge over the other people that are playing on that level because weve developed our act in Australia, which is a tougher marker, so maybe our chops are a little better honed, or it makes us work a bit harder.  But one of the reasons why we go over there is just with the hope that well play in the right room, at the right time, and the right person in the audience will be there to maybe take us somewhere else.  Theres nowhere to go here, thats the problem.

What lies on the other side of the rainbow for Geoff Achison?

GA: "Ha!  Well, you know, the whole push that were doing with recording CDs, touring as much as we can, getting in front of as many people as possible, and trying to win as many fans as we can, the end result for me is that Im looking for a job as a musician, full time.  I want somebody to pay me to get up in the morning to write songs and record, and get in the bus and drive to the show and play.  And thats what I really wanna do.  Thats what its all about.