Composed between April and May, 2000 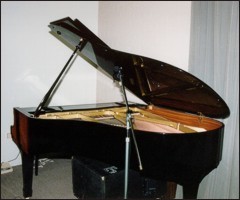 The Yamaha Disklavier is a conventional 88-key acoustic grand piano enhanced with MIDI capabilities, enabling the instruments mechanism (hammers and soft/sostenuto/sustain pedals) to be triggered by a computer.  According to the study of music, physics and engineering the lowest and highest pitches audible to the average human ear are produced by frequencies between around 16 and 16,000 cycles, or C0 and C10  the wide frequency range of the pianoforte encompassing over seven octaves of this ten-octave range, or all the MIDI note values between A0 21 to C8 108.  The title Panc hazar chakra kai andar or Within Five Thousand Cycles refers to this 27.5 and 4,186 cycles range of the instrument, which the piece attempts to explore within the context of John Cage inspired piano preparations (utilizing machine screws, flat mudguard and standard washers, plastic and brass olives, paper clips, cup head bolts, hex full nuts, white board and fold back clips), North Indian Hindustani derived cyclic rhythmic patterns, analogue synthesis, digital effects processing, studio generated harmonic resonance or 'sympathetic vibrations' and modern digital hard-disk recording technology.

North Indian Hindustani classical music theory recognizes tala as the essence of rhythm.  According to the New Grove Dictionary of Music and Musicians, In the general sense a tala is a fixed and cyclically repeated time-span for music, articulated into segments by beats of the hand or of a percussion idiophone, or latterly in Hindustani music by a configurative drum pattern.  The avard or time-span of the complete cycle is further organized around the concept of vibhag or partition (the idea of subsections suggesting additive metres, not divisive) and matra or count.  The tali or beat is the accented beat of the tala, and in performance is marked with a beat of the hand, while khali or empty is the unaccented beat, represented with a silent wave.  The first beat and count of the tala cycle is called the sam or together, and its time-point is notated with an X.  Each subsequent tali after that is allocated a number, while the khali is marked with a 0.  The tabla drum (which consists of the dayan and bayan, a right- and left-hand drum respectively) utilizes a mnemonic system of right-hand, left-hand and combination strokes known as bols (based on the consonants of the Devanagari alphabet: dh, gh, g, k, d, (t), t, (r), r and n) to establish thekas or patterns of bols.  It is the combination of all the above elements that form the concept of tala.

The rhythmic structure of Panc hazar chakra kai andar is based around the juxtaposition of two contrasting tàlas, Jhumra (14/4 or 3 + 4 + 3 + 4) and Champak sawari (11/4 or 4 + 4 + 1½ + 1½).  Jhumra and its 14-beat cycle is represented within the main melodic and harmonic structure (tracks 3 and 4), as well as within the rhythmic pulses of D1 26 and D7 98 (tracks 1 and 8)  the first tone undergoing a 22-cycles notes for rests substitution, with the next concluding 22 cycles delivering an arch form structure; the latter being a transposed three-quarter pulse-echo imitation.  Champak sawari and its 11-beat cycle on the other hand is represented by a descending hemitonic pentatonic interpretation of its tabla bols (track 2), with the sam (C8 108) displaying a separate and distinct preparation; as well as an ascending interpretation (track 7), with the sam (C1 24), again dissimilarly prepared.  The compositional process utilized in the first ostinato pattern is a 14-cycles rests for notes substitution, and the reverse for the second  in both cases this scheme is repeated in the next 154 beats.  The final element of the piece is essentially a repeating horizonally-four-note rhythmic figure (given added interest by an interlocking imitation) based on a D minor six-nine chord, which is introduced in its entirety at the mid way point, to then undergo rests for notes substitution.

To achieve the ideal semi-mechanical rhythmical fluency, the piece must contain real-time performances, which should not be quantized 100%.  The result should be notes within the target range of 3.125% of pulse (or half the value of a hemidemisemiquaver/sixty-fourth-note).

All Disklavier tracks should be recorded utilizing an Audio Technica 4050 Condenser Microphone, or similar microphone (with a close-miking technique; the placement being central and approximately 600mm above the strings), and a Fostex D-160 16-track Digital Multitrack Recorder, allowing for the separate treatment of effects. 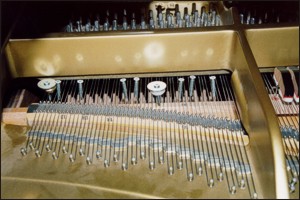 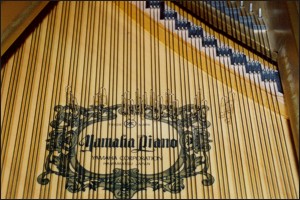 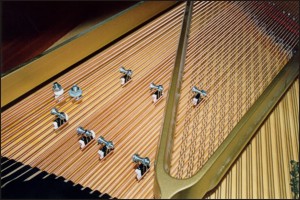 output level= 10, envelope up sweep= 7, input range= 8, resonance= 5, frequency= 3, envelope speed attack/decay= 4.5; low pass filter= on.  The advantage of using an envelope follower controller filter sweep on the prepared sound (as opposed to basic filtering) is that the filter intensity will increase and decrease in accordance with dynamics, creating a more varied texture