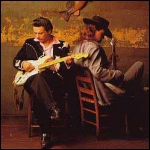 A Tribute to Stevie Ray Vaughan

Andrián Pertout speaks with Jimmie Vaughan from Texas about his brother's career and the Stevie Ray Vaughan all-star live tribute.

Introduced to music by his elder brother, Stevie Ray Vaughan went on to inspire many a young guitarist to take on the axe, and in his brief life became the kind of legend that we all aspire to.  In 1982 the performance at the Montreux Jazz Festival with his band 'Double Trouble' made him known to David Bowie, who later highlighted his talents on 'Let's Dance'.  The release of his debut album 'Texas Flood' in 1983 through Epic validated his imminent success.  In 1985 he became the first white performer to receive the WC Handy Blues Foundation's 'Blues Entertainer of the Year' award.  But in August 27, 1990, leaving an East Troy, Wisconsin gig, he tragically died in a helicopter crash.  Six years on, Jimmie Vaughan organizes an all-star tribute featuring Eric Clapton, Robert Cray, Buddy Guy, BB King and Bonnie Raitt.  A live performance of Stevie's best loved songs with the participation of some of his favourite artists, in celebration of his musical career.

What inspired Stevie Ray Vaughan to be a musician?

JV: "Same thing that inspires everybody (laughs), I don't even know!  What's the answer to that?  What inspired you to be a writer?"

JV: "Well, yeah.  Like for instance, I started playing, you know, so I could get a car and be popular with the girls, because I was terrible at football.  So I had to get over someway, didn't I?  So I'm sure it was a little bit of that, and a little bit of everything else (laughs)."

Did he include commercial success in his early dreams and aspirations?

JV: "Ummm, no, I don't think so.  I mean, everybody thinks of having a good band, and being a good guitarist, being a great musician, and travelling around.  But you don't really think of it as success, do you?  Nobody knows what success is till it happens, I think, I don't know.  Very serious and heavy questions! (laughs)"

Here we go with another one.  How did you make an impact on his life?  Did you get him into music, or was it the other way around?

JV: "No, I started first, I'm the oldest, and I started playing.  I was playing several years before, you know, he even tried, and then he picked it up because he saw me doing it.  And then about that time I ran off with a band, and I didn't see him again for several years, and then the next time I saw him he was really good, and he took off from there."

What are some of your most memorable highlights of his illustrious career?

JV: "Well, I have memories of travelling around the country on tour, with the Fabulous Thunderbirds and him together.  We actually came to Australia that way, and we went all over the world that way.  So, lots of memories like that, and you know, then I would always come and play with him at the end, and fool around like that, so...  You don't have enough time for the answer (laughs)."

Yeah, I suppose it's not going to be a book, is it?  Tell me about the live tribute recorded at the Austin City Limits Sound Stage.  How did it come about?

JV: "Well, actually what happened was one of the television networks was gonna have some TV show, and they asked if I would like to do a little segment, like two songs with a couple of his other artists, and I said, 'Of course'.  So then that fell through, the network didn't wanna do it anymore, so my manager and I decided that we would do it up big, and do a real tribute with the people that Stevie cared about, musically speaking.  And so I just made a wish list, and then called them up."

How did you chose the artists that came to be involved in the project?

JV: "I picked basically, my heroes and his heroes are the same heroes, so I just picked people that we most liked, most enjoyed.  And you know, I mean, there could've been more people, but there was just no time, and the list, it's a pretty heavy list!  So these are all people that we've known over the years, and been on tour with, and you know, they're our heroes!"

Is the material on the album a reflection of Stevie's favourite tunes?

JV: "Ah yeah, I think it was, I tried to pick the ones that I knew that he really liked, and also that people liked, and I also asked musicians which ones they would like.  So there was little bit of all of that.  I hope everybody enjoys it, it is what it is, and there's no smokin' mary's and whistles.  I wanted to do a great tribute for Stevie because I loved him, and I just tried to do the best I could, and there it is."

When can we expect to see the video of the concert at Austin, Texas?

It could be, actually.

JV: "I think it's all supposed to come out at the same time.  So actually, if you go and watch the video, it really is a nice little clip.  It's exactly the same, plus interviews.  It's a live show, very wild, everybody just came out and did a song each, and then we all jammed at the end, very natural, bluesy.  It's a great show, you've gotta see it!"

How would you like to see Stevie Ray Vaughan remembered in the years to come?

JV: "The thing I remember most about him was that he was really kind, and he was kind when everybody else wasn't.  He had that ability, and that's what I remember about him, so I think it's all pretty much gonna take care of itself.  A lot of people really cared about him, and loved his music, so I hope this naturally does what it does.  I don't know the answer to that either (laughs).  I can tell you that he was a great guy, and he did care about people, and he would do anything for anybody."