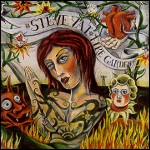 With his Epic label debut 'Fire Garden' out and an upcoming US tour with Joe Satriani and Eric Johnson, Andrián Pertout speaks with Steve Vai from Los Angeles about life in the fast lane.

In Carle Place, New York, thirteen year old Steve Vai became one of Joe Satriani's early renown students.  He went on to study jazz and classical music at the Berklee College of Music in Boston, Massachussetts, before moving to Los Angeles in 1979, which led to an invitation to join the Zappa Band.  From here on, work began on his solo career, developing his own personal sense of musical manifestation.  During this time he also took time out to perform with Alcatrazz, David Lee Roth and Whitesnake.  With the release of Fire Garden, Grammy Award winner Steve Vais passage on glory road is assured.  This latest offering projects an aura of total control, presenting him with credits as composer, producer, arranger and engineer.  He delivers some electrifying guitar performances, and takes us on a journey of discovery.  With his natural ability to explore and adapt these diverse musical genres, Steve Vai proves yet again to be endowed with substance.

Who did you look up to in your early years as a guitarist?  What were your major influences?

SV: "I had the standard influences, you know, Jimi Hendrix, Jimmy Page, Ritchie Blackmore.  I went into different areas sometimes, I got a Kit Green record, who's this absolutely phenomenal jazz guitar player, but does these walking bass lines, melody and chords, all at the same time!  And I got hooked on Joe Pass once, and what can I say except that I took lessons from Joe Satriani, who I was always totally at awe of.  But that was my guitar influences, there was very many other influences that I had musically.  I think one of my earliest memories of really being stunned musically, was when I saw 'West Side Story' on television.  I was just enamoured, I couldn't believe it, I heard orchestra music with these punks dancing around, and it just nailed me.  I thought, 'That's what I wanna do, I wanna write music.'"

Did your studies at Berklee College have any effect on your musical direction?

SV: "In a sense, at Berklee we were really into like playing really hard intense music.  I would write all this absolutely bizarre stuff, and we'd try to play it, and that's when I really got into Frank Zappa.  I learnt a lot about jazz, and its theory at Berklee, but as far as influencing my direction, my direction was, you know, rock!  And that's really not much to do with Berklee at all.  I mean, if you were at Berklee and you played rock music, you had to put something over the door!"

Frank Zappa enlisted you at 18, staying in the band for the next five years.  How would you describe that experience?

SV: "Mammoth!  I was very young, you know, and I think back of how I thought, and what I did back then, and the way I looked at the world, and I'm such a different person now.  But Frank was just incredible, I mean, he was the most special guy I'd ever met.  And just not even to mention just how rich his music is, but just how unique of an individual he is, being around that definitely can be influential, but you have to be open to it.  You have to be open to what Frank does.  A lot of people, they're intimidated, or don't understand what it is that Frank's about, they don't get it."

What sort of impact did your later association with David Lee Roth and Whitesnake have on your career?  Did it bring you greater mainstream success?

SV: "It made me a lot of money!  Of course it bought total mainstream success, those were hit, big arena bands.  When I joined David Lee Roth, as far as being a guitarist, I was literally an overnight success."

Tell me about your new album 'Fire Garden'.  From what sources did you draw the inspiration for the material?

SV: "Musically, like I was saying, the sources came, the inspirations just came from my influences as I was growing up, and even present day.  Can you hold for one second?"

(Steve Vai interrupts the interview for thirty seconds or so, which gives me a chance to play around with that Tandy phone pickup device, which tends to slip off the phone at the most inappropriate of times.  I suppose you can't expect four dollars to buy you happiness or anything else of great substance, can you?)

"Hi, sorry.  Yeah, I pooled off all my influences, everything from Leonard Bernstein to Madonna, to Prince, to Frank Zappa.  But you know, there's a lot of other influences in our lives that really shape what we are, who and what we are.  And those are things that come out in our work.  What our personalities are is what really comes out when we express ourselves, and my personality has been shaped by everything from euphoria to trauma.  And it has nothing to do with music, but it has everything to do with music."

With the significant role of composer to deal with, what made you decide to also produce, arrange and engineer this album?

SV: "Well, it's funny, I started doing that back when I just couldn't afford a producer or an engineer, or any of that stuff, I did it out of necessity.  And I found it just as creative as playing the guitar, I was totally attracted to the entire production procedure.  Anything from picking the room to put your amp in, to picking the amp.  It was a complete sonic picture to me, it was like an open canvas, and it didn't end until the mastering was complete.  And actually these days I take it further than the mastering, I oversee the actual glass cutting of the CD.  I just can't understand how somebody can just go in and play the guitar on a project!  For me it's the thrill of the complete picture.  Now, I can be a side man and go in and play the part, and say, 'OK, here's the best that I can do, the rest is up to you.'  And a lot of times it comes out great.  Sometimes it's not unlikely that I can collaborate with somebody, and the result could be better than what I'd come out with on my own.  But this is just the way I enjoy working, I enjoy twiddling the knobs.  It's really work intensive, and some of it's becoming a pain in the ass (laughs)."

What sort of approach do you have in the studio?  Do you employ any unusual recording techniques?

SV: "Occasionally, but I don't like to throw speakers in the street and mike them about half a block away, and distort them, and then run them backwards.  I mean I could, but you know, eh, I'm musical (chuckles).  What I do is, I like to manipulate samples, and I like to play with tape speeds, and tape reverse, and phase, you know, tape phasing.  On this record there's not too much of that, but what I focused more was just, you now, musically.  The record is basically three segments, it was actually a double CD in the beginning, and I squashed it onto one CD.  The first half is all instrumental, and the first part of that is actually focused on melody and just simple strong structure.  There's not a lot of bumping, grind, acid, burn, crash guitar playing.  The last section of the instrumental is very compositionally heavy, I focused really hard on just being a composer, and then making it a reality.  It's different to the first half of the record, just skip to track numbers eight and nine, and you'll see what I mean.  The last half of the record, which is phase two, is all vocal music, and I sing on it, I sing on all the music.  And it's a lot more accessible than my stuff in the past, and that has some fun guitar stuff on it."

Tell me about your September concert in Rochester, New York.  How did this project with a 60 piece orchestra come about?

SV: "Oh, that's really a great story.  I played with Joel Thome, the conductor, he had a thirty piece, and he was doing a Zappa tribute concert, and I played.  And actually I won a Grammy for the performance, it was a piece called 'Sofa', and it's on the Zappa tribute, Zappa's 'Universe' record.  And he thought it would be a great idea if we did a whole concert of my music, and I've always been interested in orchestrating, I did my first orchestra piece in high school.  So I thought it would be great to take some of my music from the past and orchestrate it for sixty piece, and then write a new piece that's about forty minutes long or so, and orchestrate that, and make a record out the new piece.  But as it turned out I orchestrated the earlier music, but I didn't have time to do the new piece, because I opted to do this tour with Joe Satriani and Eric Johnson.  But the concert is coming off, it's just not gonna be an entire concert of my music."

Do you have any other interesting projects coming up?

SV: "I'm always working on something, you know (chuckles).  Hopefully my next record is gonna be more of an independent release on my own label, and what it is, is a compilation of all of the film music that I've done.  All the cues and scores I've done for films, I listen to it and it's actually really cool.  It has everything on it from 'Crossroads' to 'PCU', which is this orchestration I was doing, and it cuts, a ripping guitar playing.  I had no idea I was doing so much ripping on that stuff.  And it's all finished, it's just a matter of getting permission from all the film companies to release."

I'll be looking forward to that.