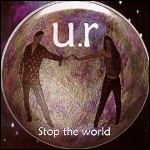 Andrián Pertout speaks with Philip and Angela OBrien about EATM, the Internet, and the U.R. brand of music.

U.R. features the golden voice of Angela OBrien, along with multi-instrumentalist, engineer and producer Phil OBrien, and together represent a dedication to pop musics dream machine.  Their latest promotional adventure has been an appearance at this years EATM (Emerging Artist & Talent in Music) conference in Las Vegas, where U.R. became the only Australian band selected to participate in this international showcase event, giving them the rare opportunity to perform their songs in front of countless record company representatives.  Their promotional endeavours have so far managed to secure them a non-exclusive film and television deal with the Westwood Group in New Jersey, and in the process established a substantial contact base that will in time deliver that imminent record deal.  Stop the World is the follow-up to My Soul Desire, and features a much more gutsier pop sound, although still in keeping with the contemporary synth and loop technology that is U.R.

How would you describe the U.R. brand of music?

PO: Its a combination of contemporary rock with electronica, a combination of synthetic with real.  And thats on the instrumental front, because the vocal front is the integration of vocals harmonies and nice lyrics, things that mean something.  Its our own sound, and were trying to merge the American rock sound with the European, which is what we get here.  And then adding our own uniqueness to it, with our own voice.

What was the reaction of the American music industry to your recent showcase at the Las Vegas EATM (Emerging Artists & Talent in Music) conference?

PO: We really went down well.  In fact, we were only supposed to play once, but they asked us to play again the following night, at a different venue.  So they showcased us again, and we went down really well.  I think whats going on over there is that theyre getting a lot of heavy grunge bands, one after the other

AO:  sounding the same, and so we stepped in sounding fresh, sounding completely different to everything else.

PO: We maintain the pop edge, the pop sound, but at the same time weve just got that something slightly different, just to make them sit up and pay attention.  As soon as we finished the performance we were absolutely inundated with people, wanting the CDs.  In fact, I remember having to go back to the hotel room to get more CDs.  Thats for real, that really happened!

How do you get involved in these kinds of global events?  Do you feel that living in Australia disadvantages you in any way, being so isolated from the action, or do you find that this is no longer a problem today with the Internet and other such innovations?

PO: Its definitely no longer a problem.  I mean, for us its just a travel thing, being sixteen hours in a plane.  But being there does help; with the Americans we found that the playing part of it was probably worth twenty percent.  The rest of it was the fact that we were just there, talking to people.  So being there is an important fact, but its not necessary to be there all the time.  But its really important to make an appearance.  To be realistic about it, for an Australian band, youve got to go there.  But to go over there with definite contacts, already set up appointments, and thats where the Internet comes in.  Through things like mp3.com the Internet can provide links to other sites, for example cdbaby.com.  And we are with anything and everything thats on the Internet.  Weve got out own web site, and were into getting people to come to our web site, were into MP3, into Real Media, anything that can expose us in some way.  Thats the beauty of the Internet, its instantaneous, they can see us at any moment in time.

How do you manage to get your contacts?

PO: We have international management.  There is a person who is based here in Australia at the moment, but grew up in Toronto and worked for a number of major record companies.  I think all the major record companies  He is the primary thing.  We use his name to get us through the door.

And how do you find out about things that are happening around the world on the Net?

PO: Its very easy to find out about these things on the Net, theyre very well advertised, especially among the circles that we move.  While the Internet is extremely vast, its also very closed.  I mean, the circles are very small.  If you go on mp3.com youll know exactly whats going on, because that provides links to other site with similar themes.  The web ring they call it.  So its very incestuous from that part, its very easy to find out.  But everyone knows about it  so obviously the individual management teams are inundated with people  so you really do need to have someone who can open the door for you, otherwise its just going to be the same deal.  The same deal years ago when people sent their demos to record companies; very few people actually listened to it, unless you knew someone.  We have attorneys, we have management, and we have an entourage of people taking care of us.

What is the music scene like in the US nowadays?  What seems to be happening?

PO: Thats a tough question  I dont think that they are as progressive as the Europeans.  They tend to be a little stagnant, which is really good for us.  There are some interesting things, not to say that there arent any interesting musicians, the musicians are interesting, its just the record companies arent.  The majors are not really signing that much, its the independents that are doing most of the signings.  I think theres a lot of Lets wait and see going on.  It just seems to be a very unstable and volatile market, not a lot of people know whats going on.  There are a lot of really talented people over there, but it just doesnt seem to be moving forward progressively, which is good for us, because we seem like a breath of fresh air.  The whole LA scene, the whole New York scene and the whole southern scene seem to be stagnant.  We saw bands at EATM that really were ten years old, and they were doing exactly the same thing as ten years ago, soul and funk bands, grunge rock bands.  So theyre definitely behind the Europeans in that respect.

Tell me about your upcoming album Stop the World.

PO: Our album Stop the World is something that were really proud of.  We really do feel good about this one, its contemporary, its got a lot more of us in it, and its got an edge to it.

PO: Were really defining our sound.  We feel that while its in keeping with the contemporary genre, it really is our sound.  And its just got this little bit of an edge to it that we feel might just rock the boat, when people listen to it.

What is the sound of the album all about?

PO: We come from traditional instrumental backgrounds  I was taught how to play bass, and Angie was taught how to play piano  but weve grown up with computers.  So this new album is basically this integration between real sounds, which I guess is whats going on at the moment, but its also an integration with electronica.  So its not electronica, and its not pop rock, it both of them together.  And thats what U.R. is, and thats what this album is.  Its a combination of loops, real guitars, real drummers playing along with loops, synths, everything merged together.

Stop the World distributed by U.R.  For further information visit the U.R. Home Page on the World Wide Web.