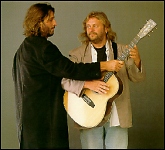 World Music from the West Country

Andrián Pertout speaks with Show of Hands Steve Knightley from the UK about their unique brand of acoustic music.

From their base in the West Country of England, songwriter Steve Knightley and multi-instrumentalist Phil Beer run the Show of Hands project, which not only releases product under their own label Hands On Music, but also utilizes local businesses to manufacture both their acoustic musical instruments and electronic PA equipment.  The partnership has its roots in the Devon city of Exeter, where the duo performed together during their teenage years, later splitting in order to follow their own individual crusades, to be then re-established in the mid 80s.  The Bridport Festival of 92 is the setting for their debut album, and its this live recording of the act that then perpetuates their standing in the global acoustic scene.  In 1995, they recruited Australian engineer, producer and manager Gerard OFarrel, therefore enhancing the scope of the Show Of Hands team even further.  The following year they went on to produce their most successful album yet, which was the product of a performance at the famed Royal Albert Hall in London, brought to life using the muscle of their vast fan base committed to their mailing list.  The latest album is titled Dark Fields, and stands as a testament of the notable musicality that is Show Of Hands.

How did the Knightley & Beer partnership come about?

SK: "Weve known each other since school, we lived in the area of Devon, the Exe Valley in fact.  And we were in sort of rival acoustic bands when we were fifteen and sixteen.  Phil then went through becoming a professional musician within various line-ups, did sessions with Mike Oldfield at one time, he was on a Rolling Stones album and in a band called the Albion Band.  And I went through the education grind mill, then I did a thing in rock bands in London, in the 80s, '80 to '86, and that broke up and I moved back in despair to the countryside, thinking, Thats it, Ive had my go. (Laughs)  And then Phil left the band he was in, the Albion Band, in 91, and we thought, Well, lets try playing some of the songs that Id written for the rock band, but with an acoustic approach.  We initially played in pubs and bars, and clubs, but tried not to do standards, we tried to do original stuff.  And then we tried to introduce other instruments, like the cuatro (four-string lute) from South America.  So we ended up with a selection of original songs, but played in front of ordinary people with a bit of bullocks, unlike a lot of people on the acoustic scene in England, where its all a bit polite, apart obviously from the Irish and the Scots who because they play their music in bars and pubs, you know, thats where its from, theyve got that sort of conviction that a lot of English performers lack.  And then we broke into the festival scene with an album called Live 92, and on stage we continued to have that sort of edge, plus all the instruments as well.  So the combination has grown really.

What is some of the musical instrumentation that you have incorporated over the years into the sound of Show of Hands?

SK: "Well, because were brought up listening to the blues, to South American music, reggae, flamenco, Irish folk, all sorts of things, were aware that an English audience likes that rooted music.  And because we dont really have a strong rooted or folk tradition of our own, weve decided to use first of all a cello-mandolin, which is a bit like a bouzouki, and it gives you a real good drone, with lots of sympathetic strings.  Phil started playing an Italian mandolin, although he got an American version, a flat back.  He then played fiddle, I found a concertina, and we then had thing called a cuatro made for us.  And thats a South American instrument, but we started using it almost like a Spanish guitar, for lead lines.  And we both play guitar and slide guitar as well, so we ended up with this array of stuff on stage, and we can change between them all the time, so the textures change for people.  And our principle was to sing songs about where were from, so youve got songs about Dorset, about Cornwall, about Devon, and about people who work on the land.  And that was our poetry, world music instruments, but sort of regional West Country songs.

How do you perceive the effects of your global travels around Europe, America, Indonesia, India and Australia on your music?

SK: "It was fantastic, and in India in particular we were playing to an Indian audience who was highly educated, very Anglicised.  And they really responded to songs that were about the landscape.  Theres a song on the album called The Poacher of Longdog, and of course in India poaching is a big thing, its not just a rural bit of fun and games, its seriously threatening endangered species and that, so that had a resonance there.  We do a song about water ownership called The Well, and again that was picked up in India.  And the other thing that we found is that they recognize the acoustic craft, because they almost assumed us as classical musicians, and they were very respectful (chuckles), the people sitting there.  And obviously they were used listening to ragas that last for three hours, so three minutes of us was quite easy.

Tell me about the marketing structure of the act.  What is the totally independent stance that you have adopted?

SK: "You can go to London with the music that we play, but apart from the Royal Albert Hall, we dont go to London to do gigs, it just doesnt work for us.  The press isnt interested, in England its the BBC and three mainstream stations that control what people hear, virtually.   And we just cant break into it, they look at these acoustic instruments and they say the dreaded f, folk word, and thats it.  So we thought, Why do we bother, lets just build up a mailing list first of all, so that we can sell direct to people.   And then we met a chap from Sydney, a guy called Gerard OFarrel, who began to manage us.  Hes also a sound engineer, and he set up an Internet site thats now flourishing.  We then started booking our own gigs, and then decided to go to a West Country firm that made this fantastic PA equipment, and they sponsored us.  We got all our instruments made by a guy called David Oddy in Exeter.  So before we knew it, we had this little cottage industry that was completely self-contained.  We were making our own music, our own instruments and our own PA.

How would you describe your approach to songwriting?

SK: "I try to tell stories, because the English tradition is very much a narrative one, and I try to tell stories that arent about me.  To be honest, I think people are bored with the singer/songwriter genre.  I think this idea of hotel rooms, relationships, and more life on the road stories, sounding vaguely mid Atlantic accents, people have had enough of it.  So I thought I would write songs about the tin mining industry, about the preachers and poachers, and people that work on the land, rather than just describe my own emotional landscape, try and describe the one I live in.  And Im really surprised of the general appeal of that specific focus.  So that you travel the world, you go to America and people say, Yeah, I can picture this place.  And it wasnt intentional, but by accident, and Im gonna carry on, Ill just see (laughs).

What have you got planned for the near future?

SK: "Well, weve got the album Dark Fields released here, and they want us to come back in six months to do more work, which were absolutely delighted about, in June, in fact.  And I can say that the Australian audience seems to really like the way that we introduce songs, and talk to them about where theyre from.  Its almost as if a lot of people here perhaps dont talk to audiences.  And they just go, One, two, three, new album song.  So we really try to communicate, and I thought we might get a few sort of wise cracks back, but no.  The only thing we heard was when somebody came up and said, Didnt realize you guys were English cause you look so rough. (Laughs)  And I thought, Thats great, people do say what they think.  That is refreshing actually, you can save a lot of time here, by people just saying yeah, they like it or they dont.  And in the near future, we arrive in England next week, we have three days off for us to tour Holland, then we come back, we have two days off, and then we do thirty dates in England.  Christmas is free, and then were off to Canada and India again, a return visit to India.  And then back here again in June.  But were also organizing our own series of festivals in England, now that we have the infrastructure, the PA and the lights, and the whole thing.  Were organizing a series of outdoor events, in sort of lovely garden or castle situations, or whatever.  So yeah, were busy enough (laughs).

SK:  In England the only thing that you can eat late at night is curry, so were experts in Indian food.  And for the first tour we were actually paid in curry, that was part of the deal, they provided unlimited food and accommodation for us, you see.  And we went to Delhi, down to Madras, Hyderabad, Aurangabad, Jodhpur, Jaipur, Agra, all around.  And actually, one really funny thing is that we got a chance to play with some Indian musicians in Jodhpur.  We met these Rajasthani tribesmen and swapped songs, and some very similar tunes as well, from some of their traditions.  Songs about water, or the usual Gypsy comes to the castle gate and runs off with a woman story.  They had an almost identical song with a similar melody, and that was a real back of the neck, hair on end type thing that happened.

Dark Fields distributed by Hands On Music. Email: gerard@showofhands.co.uk  For more information take a cyber tour on the Show of Hands Web Site.