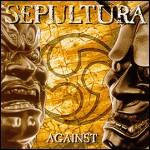 Andrián Pertout speaks to drummer Igor Cavalera and Sepulturas new vocalist Derrick Green about the birth of the band, and their latest album Against.

South American band Sepultura came into existence in 1984, and it was against the backdrop of Brazils south-eastern city of Belo Horizonte that the childhood dreams of brothers Max and Igor Cavalera were finally realized, essentially animated by combining the rhythmic force of the region and external heavy rock nuances.  The sonically unique result evolved into a series of successful albums with collective worldwide sales exceeding the five million mark, ultimately culminating in the groundbreaking Roots album of 1996, where Brazilian sambas stand-up drumming traditions were highlighted together with the hypnotic pulse of the berimbau and the exotic sounds of the Xavantes tribe of the Amazon forest.  Sepulturas latest album titled Against was produced by Howard Benson and mixed by Bill Kennedy, and as well as introducing new vocalist Derrick Green to the battle zone, the studio venture incorporates the lurid artistry of Japanese percussion group Kodo.  The current line-up also includes founding member and drummer/percussionist Igor Cavalera, guitarist/vocalist Andreas Kisser and bassist Paulo Pinto.  Sepulturas musicality stands worlds apart in the late 90s, and its influential drive is therefore certain to fuel the pop engines of the twenty-first century.

How was Sepultura initially formed?

IC: "It was in Belo Horizonte, the city where we started, not too far from São Paulo and Rio, and it was back around 84.  And Max and I would be talking to a lot of people about Sepultura before we actually had the band.  It was like a cool thing at school, like, Yeah, weve gotta band!  But never had really played or anything like that, so we started way before we ever played together.  And at one point were like, Weve gotta jam, weve really gotta start jamming.  So we just got together and started like making a lot of noise, and then from those noises it just got more and more serious.  But the real beginning of it was just really disturbing a lot of people (chuckles), a lot of neighbours.

What is the ideology behind Sepultura?  What is the essential message that the lyrics attempt to portray?

IC: "There isnt one, thats the cool thing about it.  Theres not one message or one way of doing it, because the main thing about Sepultura is really breaking barriers.  At first, like coming from Brazil and having broken the whole psyche of European and American bands, we learnt that we couldnt put any limits on music.  And we learnt that at a very early stage with the band, we were like, Wow, if we limit ourselves were gonna be so boring.  So when wed do an album, everybodyd be expecting us to do the same album again, but Bestial Devastation and Morbid Visions were different, and then Schizophrenia was very different again.  And then it just kept changing, so the more we wanted to have a change, the more we kept our music open-minded.  So those are the two main things that I see in Sepultura.

How would you say that your brother Maxs departure from the band has impacted on the music?

IC: "I think the main thing that I noticed with Against was that the writing process was different to when Max was around.  It was a little simpler, because we had like a three-piece, just drums, guitar and bass.  And before we had two guitars, and Max and Andreas  kept swapping a lot of ideas, thats the main difference.  As far as like musically wise, it would be impossible to say how weve changed, but I think the basics of it have changed a lot.  And I think the direction was something that was a little more just natural, like how we were feeling at the time when we were writing.  We didnt really think too much about where we should go with the album or how we should do it, it was just how it came out.

Tell me about your new album Against.  Did you employ any unusual recording techniques in the studio?

IC: "There were a few different ideas, and one that I really liked was when we recorded drums in the drum room.  I had my drums set up with a piano in front of it, and had a microphone inside the piano.  So anytime I hit any part of the drum, the ambience on it was very weird, and thats something that we captured a lot on the album.  Which was totally crazy sounding at the time, but then later on, just adding a little bit of that microphone brought a whole different sound to the drums.  That was one of the things that I remember, and then Andreas was experimenting a lot with different amplifiers.  Not really changing his guitar, but the amps that he was using to a point where he playing through those little Marshalls.  You know, the little ones that youd never imagine people would end up using on an album.  He did leads on those, and its just like weird shit really (laughs).

In what ways does technology play a role in the music of Sepultura?

IC: "Today, theres a lot of it, and especially on the whole way that this producer worked.  He did a lot of stuff on Pro Tools, and that gave him a chance to really do a lot of post-production stuff, where he could change a lot of the structure of our music without really changing our music, without messing with whatever we wrote as riffs and drum beats.  He didnt change that, but as far as like parts, later on he would pick up certain parts and place them in a different spot in the song.  And wed never done anything like that in the past, and were very surprised, because that was a way that technology could work with Sepultura.  But at the same time a band like Sepultura could never be totally dependable on technology.  Like for us, when we do a show, if a sampler or drum machine doesnt work doesnt mean that we cant play.

How did the opportunity to join the band come about?  And what has been your general approach to the vocals on the new batch of Sepultura songs?

DG: "A friend of mine and the band at Roadrunner N.Y. told me that I should try out for the band.  Sepultura sent me the song Choke with no vocals and I went into the studio, put my tracks down, then sent them the tape to Brazil.  A month later the band called me and asked if I could come to Brazil.  I went down and we jammed together, and the rest is history.  And I try to make the vocals diverse, so its not just screaming youre hearing, but also singing and keeping that heavy vibe.

What do you have planned for the future of the band?

IC: "Right now, its a lot of touring.  We start in October, and were gonna do about a month in America, after that we go for two months with Slayer in Europe, and then we have a little break for Christmas.  And then were gonna be here hopefully for the Big Day Out to do the dates that we missed last year, and also to do our headlining dates in Australia.  After that were going to try to do Japan and South America, and then just start linking tours all the way through summer, festivals in Europe and then America again.  So its like a lot of touring in front of us, like crazy (laughs).

The second part of this interview was published in Mixdown Monthly issue #57, January 1998. In this article Igor Cavalera discussed his beginnings, as well as Sepultura's association with the Xavantes tribe and Japanese percussion group Kodo.