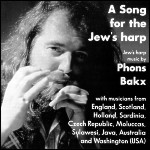 The Jew's Harp in the Netherlands

Andrián Pertout speaks to Henk Postma from the Netherlands about Dutch Jew's harp traditions, highlighting the writings and music of performer Phons Bakx.

Henk Postma started out as a reporter, but in time turned to the creative arts, becoming an assistant to the development of concepts for projects with plastic artists and musicians. These days he is additionally a distributor of contemporary music from around the world, and a devoted Jew's harp enthusiast. He once wrote, "High-tech drowns the world in a melting pot of cultures. In this feast of miscellany, authenticity often plays a role as wallflower. When reason dances, the magic disappears. In that circumstance there is a need for music that gets the soul in touch again with primal nature as the breeding ground of life. This brings us to the revival of a tiny, long forgotten musical instrument, the Jew's harp, also known as jaw harp, trump or (in Germany) maultrommel. Throughout centuries, and within practically all cultures, the Jew's harp bridged the gap between all day life and the mysteries of nature, especially the gap between man and gods, or between male and female." This interest has developed into an ongoing association with Dutch artist Phons Bakx, a master of this instrument of the plucked idiophone family, and one of its major European exponents. In his principal writings titled 'De Gedachtenverdrijver' or 'The Thoughts Dispeller', Phons Bakx outlines the chequered history of the Jew's harp.

How did Phons Bakx begin playing the maultrommel or Jew's harp?

HP: "Maultrommel is the German word, but in the Netherlands we say mondharp. In English, names such as jaw harp or trump are also used. There is a lot of discussion about these names. We have published a booklet in which we collected more than one thousand names for the Jew's harp from all over the world. In his principal work 'De Gedachtenverdrijver/The Thoughts Dispeller' Phons Bakx writes, 'I got acquainted with the Jew's harp in the beginning of the seventies, when I heard a friend playing the instrument. In 1974, on a journey to Ireland, during a long bus ride over the isle of Anglesey, I placed a Jew's harp against my teeth for the first time. In 1985, when I was making broadcastings about folk and ethnological music for a local radio station, I became aware that unperceived Jew's harp music from twelve different world cultures had been slipped into my sound archive. After that I started a search for documentation about Jew's harp music, which finally resulted in the writing of a book about the worldwide history of the Jew's harp, and the making of about 120 drawings of different Jew's harps, of which a selection was published in the book. This was followed by an eight hours-lasting radio program about different aspects of Jew's harp cultures.'"

What are some of the techniques utilized in the performance of this instrument?

HP: "In the Folkworld column Phons Bakx writes, 'The Jew's harp consists mainly of two parts, a stabilizing frame and a moveable lamella that is fixed on the frame. The lamella has to be plucked in front of the opened mouth against the teeth. The mouth cavity serves as the sound resonator, and it also influences the timbre of the harmonic tones or overtones. The Jew's harp can be seen as a melodic instrument reaching over the natural pentatonic scale. Each plucked tone presents the going-on sound, if we could hear it, of the keynote wherein the Jew's harp is tuned. In this way we can call it an old-fashioned burden instrument, that has been used for many centuries in rural and traditional folk music in Europe. It's also a rhythm instrument, for instance in combining the finger pluckings on the lamella together with breathing pulses.'"

How has the Jew's harp been adapted into European culture over the last 500 years or so?

HP: "Phons Bakx once stated in an interview, 'Five millennia ago, the Jew's harp was developed out of the running reed in the Far East. Rooted in shamanistic or animistic cultures, the metal type of the Jew's harp was transmitted into the folk music of medieval Europe. For a while the instrument even appeared in the composed chamber music at the courts. The industrial revolution made an end to the popularity of the instrument. A special reputation was maintained in the more agricultural regions of Europe. The folk revival of the last twenty-five years gave the Jew's harp a new chance. A lot of folk music groups may have used the Jew's harp, mostly as a rhythmical voice instrument, but on the whole the Jew's harp has been considered in Europe as a poor limited sound instrument on which you can never develop a worthy sound. In these present days we can break with this point of view: The Jew's harp had proved to be a very rich instrument, but its possibilities are still unknown to many of the musicians. It also takes a lot of energy to master some of its sound possibilities.'

"Nowadays, the Jew's harp appears more and more in electronic pop, avant-garde, jazz and world music. The overtones of the tiny instrument even shimmer in techno beat dance halls. Specialists from all over the world give new life to the instrument and explore the rich possibilities, all in the varied background of different cultures. Last summer, a main group of nearly a hundred Jew's harp specialists gathered in the Austrian village of Molln, where the 'Third World Congress and Festival for the Jew's harp' was held. There, you could have met all type of players, investigators, ethnomusicologists, publicists, etcetera, from Japan, the Siberian Republics, Tuva, USA and European countries such as Austria, Germany, Norway, Holland, Finland, Hungary and Switzerland."

Tell me about the Dutch Jew's harp Pages that you have published on the Net. What types of information do you cover?

HP: "The site is concentrated on the internationally orientated Jew's harp culture of the Netherlands, which has come to existence around anthropological artist Phons Bakx. It also offers some links to Jew's harp organizations such as 'The Jew's harp Guild' in the USA and 'The Austrian Maultrommel Friends' who organized the 'Third Jew's harp World Festival'. On our site we also have 'The Dutch Jew's harp Newsletter', and we sell some products such as the CD 'A Song for the Jew's Harp', which presents surprising aspects of the concerts that Phons Bakx has given in the last ten years. The CD admits the Jew's harp in a collection of world music, folk music, songs of life, medieval songs and new music styles. Phons Bakx worked with seventeen musicians from ten different cultures, playing a wide range of musical instruments. It is possible to listen to some samples in real audio format. In general, the music on this CD is in an European style, but there are also influences from North American and Asian cultures, Siberian, Indonesia. One can hear the Jew's harp sometimes alone, sometimes in duet, but mostly in combination with instruments such as clarinet, recorder, bamboo flute, reed flute, accordion, percussion, guitar and/or vocals. We also sell hard to get Jew's harp CDs on our site, from Siberia, Finland, USA, etcetera. In the next few months this service will be improved. As an extension of Bakx's book about the worldwide history of the Jew's harp, which is published in Dutch language, we also offer several booklets in English, known as the 'The Thoughts Dispeller Cahier Series'. It is also possible to ask us questions about the Jew's harp by email."

How would you describe the music performed by the Phons Bakx Ensemble?

HP: "The Phons Bakx Ensemble was a group of mainly five musicians, from the Netherlands, the district of Zeeland, and at the end of 1998 split into a new folk group called 'Primrose'. Phons Bakx then stopped playing regularly with this group, but continued performing duets on Jew's harp with Enno Meijers, who is now working with Phons to make a second CD. This CD will feature some new experimental tracks from Phons and Enno, but also dubbed mosaics and traditional music, played with guest musicians. The new group 'Primrose' will continue performing a repertoire that is influenced by European and North American folk music, of Klezmer, Gypsy and Siberian cultures. The strength of 'Primrose' includes Gerard Marinus Verkerke on vocals, Jew's harp, mouth organ and percussion, Rosilde Vermijs on accordion, Marijke Karreman on violin and guitar, Marjoleen Klaver on violin, Iz van Elk on didjeridu and percussion, as well as other guest musicians."

What kind of artists on the other hand did Phons Bakx feature in his 'A Song for the Jew's Harp' album?

HP: "Apart from the local musicians mentioned above, the CD features a lot of musicians from outside of the Netherlands. Some of the recordings are the result of sessions with Scottish storytellers, such as the nomad Duncan Williamson, BBC radio man David Campbell, the Scottish Jew's harp specialist Lindsay Porteous & the singers Pomme Clayton from England and Sáscha Salinasova from the Czech Republic. Others come from performances with world musician Marinus Jan Hubrechsen from Australia, and busker Anny Keene from England. Contacts with the American Jew's harp player/maker Kendall Rownd resulted into a particular musical confrontation. Kendall Rownd has worked for many years on Jew's harps in relation to electronics. Co-operation with musicians from the Indonesian Archipelago brought typical but powerful session recordings. Among the players were Franky Berhitu from Moluccas, Dris Alexander from Sulawesi and Renadi Santoso from Java."

Is there much scope for this music in the Netherlands and the rest of Europe?

HP: "As said previously, nowadays, there is a revival of the Jew's harp in European countries, and so they are used in numerous contemporary music styles. Personally, I'm very impressed by the way young musicians from Scandinavian countries are using the Jew's harp in contemporary folk music. The Jew's harp is taking the benefits of the growing interest in 'world music', but in Europe there is still a 'world' to win for the pure Jew's harp music, and still little is known about the use of the Jew's harp as a musical instrument in the true sense of the word. Most people still think it is only a children's toy." What can we expect to experience at the upcoming fourth 'International Jew's harp Festival & Congress' in the Netherlands? HP: "As was the case with earlier editions of the festival/congress, which took place in Austria in 1998, the Russian Republic Sakha-Yakutia in 1992 and Iowa, USA in 1984, the Dutch festival will have some of the best Jew's harp players on stage, coming from all over the world, representing different cultures. As it will be organized by the National Dutch Organization for Contemporary New Music 'De Ijsbreker', we can also expect special attention to experimental music. Besides that, Phons Bakx, who was asked to start the preparations and research for this festival, has planned to pay special attention to Jew's harp music from the Indonesian Archipelago. The festival will be held in the year 2002."

'A Song for the Jew's Harp' distributed by Phons Bakx. For further information about Henk Postma and Phons Bakx visit the Dutch Jew's Harp Pages, or The Folk World Column. Email: paclax@zeelandnet.nl