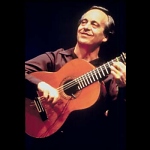 The Art of Flamenco

During the UK league of his Flamenco Passion tour, Andrián Pertout spoke with  guitar maestro Paco Peña from London about his beginnings, and the art of contemporary flamenco.

Inspired by the Andalucian traditions of his native town of Cordoba, Paco Peña adopted the Spanish guitar early in his childhood, to then make his debut performance at the age of twelve, and in time gain the anonymous recognition as one the greatest flamenco guitarists of this century.  He has performed in the worlds most prestigious venues, including the famed Ronnie Scotts Jazz Club, Londons Royal Albert Hall, New Yorks Carnegie Hall and Amsterdams Concertgebouw, and his European recitals with John Williams, as well as their outstanding collaborations with world renown Chilean group Inti-Illimani have achieved worldwide acclaim.  Other prominent tours have included music greats such as Joe Pass, Leo Kottke, Eduardo Falú, Elliot Fisk and Pepe Romero.  His enormous talent and acknowledged status as a great master of flamenco music has been widely celebrated, and in 1985 Paco Peña became the first individual to be bestowed with the honorary title of Professor of flamenco guitar at the Rotterdam Conservatory in the Netherlands.  He has also been previously voted Best Flamenco Guitarist of the Year for five consecutive years by readers of American Guitar Magazine.  He founded his famous flamenco company of dancers, guitarists and singers in 1970, and has since appeared in many parts of the globe.  The current Flamenco Passion tour highlights the power and passion of Southern Spains song, dance and music, and is being presented by some of the worlds most sensational exponents of the Art of Flamenco.  The concerts feature Pacos solo guitar playing, and include the support of the famous Losada Brothers, Tito, Vaky and Diego, the great singer Angel Gabarre, as well as star dancers Angel Muñoz and Belén Fernandez.

How did your passion for the guitar come about?

PP: "Well, I dont really know, it was like something growing in the family, in the community that I was growing up.  The music that I play was all around me when I was growing up, and when you have some artistic inclination, I suppose as a kid you chose the vehicle that is easier and most available to you.  My brother had a guitar before me, and I just picked it up, and again it was kind of inertia, just following what I saw my brother do, because it was in the house already.  So the guitar was in my family, and it was all over the place when I was growing up.

Tell me about that atmosphere when you were growing up.

PP: "It was great in the sense that people enjoyed themselves with music, and did their own entertainment.  They played guitar, and they sung and danced whenever there was any celebration.  So for young people thats very bonding, and awakens any ability you may have in that line.  The community that I grew up with was very simple, very ordinary people, but very happy, so when anything required some kind of celebration, we made it up ourselves.

What is the essential philosophy behind the flamenco musician?

PP: "I think any flamenco artist will be very connected and influenced by the history of the music.  Well, by the live history of the music, by the roots of the music.  In other words, you have grown up as I did in the society that has created this music, and that carries a baggage of social tensions.  Its people wanting to express their emotions some way through music, and they end up with this very dramatic kind of singing and dramatic expression, which is the flamenco song.  And it carries a lot mournful qualities about it, because it stems from difficulties in the history of the people there in Andalucia, from turmoil, wars, discrimination and all kinds of things like that.  So people express what they feel, and sometimes it is mournful like that and sometimes it is very happy.  But anybody wanting to participate in this music really has to appreciate that history, and that way he or she can really express the music as it is.  In a technical sense, there are complex rhythms to appreciate, to learn, and to know so well that you can actually improvise with them, because that is what is required.

How would you describe the guitar technique?

PP: "Its a folk tradition, but very specialized folk.  You know, its like music that you play for people to sing and to dance, and therefore you provide a very clear rhythmical accompaniment for the dance.  You also in a way emulate the sort of tone qualities of the voice, with sounds that you can achieve on the guitar.  All this has to do with the tradition of the music, which has oriental elements as well as occidental.  So with the guitar you actually somehow suggest these qualities of the flamenco voice, and that way you stir the singer into action.  I mean, although you deal with emotional elements on the guitar, but also rhythmical and complex technically, you have to play melody and rhythm at the same time, and you have to improvise and so on.  So anyway, its a particular music.

Tell me about the development of the rhythmic elements of flamenco music.  How was the Peruvian cajón introduced into the contemporary ensemble.

PP: "Well, I think it was in fact quite a happy idea, quite a clever idea.  And Paco de Lucia was the first one that introduced it in flamenco.  But the point is that its really an extension of what happens in flamenco anyway, which is the clapping.  You know, the hand clapping in flamenco is quite elaborate and very syncopated, and very exciting for the percussion element.  So in fact introducing a cajón is simply going a little bit further, and giving an instrument the same kind of quality as the clapping, because its quite similar to hand clapping really.

In 1970 you founded your famous flamenco company of dancers, guitarists and singers.  What do you regard as the major reason for its global appeal?

PP: "What motivated me to start a company was the fact that I had grown up that way, accompanying singers and dancers, and being part of a company as an accompanist.  Well, that was fine, but later on in life I decided I wanted to do something for myself.  And it wasnt ambition as such, but it was a little bit of not wanting to waste my energies, because I wanted to do more if I could.  So I started a solo career, but then having achieved some recognition as a soloist, I wanted to go back to what I wanted to do in flamenco, and I wanted to do it in my own way.  I saw at the time that a lot of companies were appearing, giving flamenco a kind of superficial treatment, a little bit like theatricalities and gimmicks that were not really part of the flamenco tradition.  And I was a little bit annoyed about that, so I wanted to start a company that would be true to flamenco traditions, and bring it as it is, without interference.  So I decide to do a very pure expression in flamenco, with dancers and singers.  I did that with very few people, but it was very successful right from the beginning.  So I suppose that is the appeal, the fact that it is quite true, pure flamenco, in the way that we artists appreciate it nowadays.

How would you say that your outstanding collaborations with John Williams and world-renowned Chilean group Inti-Illimani have effected your musical perception?

PP: "Well, thats a good question.  The thing is that I feel privileged to know these people, and to know many other musicians from other cultures, and particularly from classical music.  Like you mentioned John Williams, I have learnt a great deal in terms of organizing ideas, because you may be familiar with flamenco, I think you are, and flamenco can be disorganized in terms of the compositional qualities.  Certainly in my time it was a little bit dispersed ideas coming together, and for me to experience the way classical music worked was very enlightening, in that I learnt much more about how to round up ideas.  Even if they are flamenco and they are improvised, you learn to actually give them shape.  So really Im very grateful for these collaborations, because it doesnt change my flamenco, but it certainly expands my appreciation of music in the way that my flamenco benefits.

And what do you regard as your most memorable experience with Chilean group Inti-Illimani?

PP: "Its been wonderful really, and I think the whole musical experience has been terrific, because they are very creative people, and to collaborate with them has been very energetic and very productive.  But emotionally, I dont think you can go much closer to the bone than to play with them as we did in the stadium in Chile, where notorious events took place just after the coup, and being with this Chilean group that was exiled on account of their beliefs.  And you know, coming back to the whole reasons for the coup that took place in Chile, and so on.  So to sit there in that stadium, and play with them for Chilean people was very moving for them, and indeed very appreciated by the audience there.  So I think that probably was the most significant moment.

What other interesting projects are you currently involved in?

PP: "I am finishing a recording which I did live with my group in Germany, and apart from that, just before I come to Australia, I have to appear with my company in the Proms, in London, which is a very big festival of music.  And its the Last Night of the Proms, in Londons Hyde Park, so Im appearing with the company there.  I also, believe it or not, have to play with Inti-Illimani and John Williams on the sixth of this month here in London, for the commemoration of Victor Jara.  I dont know the exact date that its commemorated, but its to do with Victor Jara, so we are having a concert here in London, and Im delighted about that.  In Spain, I also have a centre, its called Centro Flamenco Paco Peña, and it is in my home town in Cordoba.  And the main idea for that centre was to establish a festival, which I did create there, called Festival Internacional de la Guitarra, and that now is a very prestigious and big event, but Ive passed it on to the council of the city, so they look after it.

Paco Peña: Beyond the Frets of Mortal Man