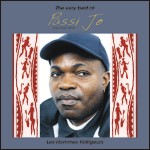 Andrián Pertout speaks to Passi Jo about his life as an African troubadour and international performing artist.

The Passi Jo 'Kass Kass Man' story begins in Congo-Kinshasa, where the political turmoil of 1964 that engulfs the region initiates mass repatriations, and his eventual return to his ancestral homeland in Congo-Brazzaville.  This is the setting for the revival of folklore, and the inspirational stories of legendary African minstrels travelling from village to village with their songs of love, hate, death and friendship, and this is also where the fact of being a direct descendant of these 'Balari Troubadours' ultimately compels him to embrace their legacy, and not forsake destiny and tradition.  With compositions based on Bas Congo rhythms such as Wala and Patenge, the musical career of this songster is propagated, firstly with album releases and performances in the Congo, to then include the remainder of the African continent.  In 1982 ambition directs Passi Jo to Paris, and this European base becomes the stamping ground for the chain of successful international tours that follow.  A musical revelation that introduces him to fans in most of Europe, North and South America, Oceania and Africa, performing with renown artists such as Super Boboto S.B.B., Trio Madjesi, Kass Kass, Abeti Masekini, Sam Mangwana, Essous Jean Serges, Teo Blaise, Four Stars, Tabu Ley Seigneur Rochereau & Afrisa International Orchestra and Mose Fan Fan.  As a consequence of an Australian tour in 1990, his natural attraction for the 'Great Southern Land' originates the later decision to return to settle in 1993.  His latest release 'Les Hommes Voltigeurs' is his fifteenth album release to date, and is an auspicious attempt to consolidate three decades of the musical evolution of the 'Kass Kass Man'.

How did your musical career begin?

PJ: "To begin with, thanks for this interview.  I was born in Kinshasa, and when I was twelve years old, my mother was repatriated to our homeland in Congo-Brazzaville, because of political problems.  Two months later I joined her, and there I started school, and everything.  Later in 1968 I started my musical career, before that I was just playing with friends in the village, in the suburbs.  There was a band called 'Les Frères Siamois' (The Siamese Twins), and this band's manager asked me to be the arranger of their lyrics, because at that time people couldn't sing correctly in Lingala (a major Bantu language of the northern Congolese region), in the Congo.  And one day he invited me come to their rehearsal, and because I already knew their songs the manager said to me, 'Can you try to sing!'  And I said, 'Yes!'  And when I sang, everybody got excited and they said, 'From today you are going to sing in the band, because you have a good voice.'  That's the way I started singing."

Music has a varying significance from culture to culture.  What is the meaning of music in Africa?

PJ: "Usually, in my country, the Congo, and in Congo-Kinshasa, people sing anywhere and everywhere, when they are working on the farms, when there is a party, when there is a funeral, or a family meeting, or a ceremonial occasion.  Singing is a pleasure in my country, like in all of Africa.  Anything that they are doing, the music accompanies, music means a lot in Africa.  I come from a family of artists, my mother sang and danced traditional southern Congolese folklore, my father played accordion in the church, and my auntie played acoustic guitar in the salvation army, so music was very important in my family, like it is for all families in Africa."

In 1982 you moved to Paris, becoming your European base for best part of the next decade.  How would you describe the music scene there?

PJ: "I decided to go to Paris to pursue my musical career there, and to record, because in the Congo, at that time we didn't have good recording and production facilities.  That's why I left the Congo and went to Paris.  And when I got there, a country I had never been to before, it was very difficult to start from the beginning, but with a bit of luck I found friends who introduced me to people in the music scene.  At first I started with my traditional and modern music, and because of seeing a lot of different artists there, I worked hard to mix my music with the music of other countries, and then I got the best sound.  In Paris there was a lot of different music of the world, like Salsa from Latin America, Zouk from the Caribbean, Soca from Mauritius, Makossa from Cameroon, Djiglibiti from the Ivory Coast, Gota from Benin, and rock, jazz, funk"

Tell me about your style of African music.  Do you use a combination of traditional and western instruments?

PJ: "Yes, sometimes I use the sanza or likembe (mbira or thumb piano), a type of African harp, balafon (xylophone) and ntsakala, a kind of shaker made from a can, which has holes punched all over it and is filled with stones or pebbles.  We have another instrument in my country with a calabash body, a short or long neck and two strings, and another made of a goat's horn.  I combine all these instruments with guitar, bass, drums and brass.  The style is traditional African music, Congolese folk.  In the Congo there are many ethnic folk styles, and my style is based on the music of South Congo, which is where my mother's village is situated.  This style is called Wala of Bas Congo."

You have performed from Zimbabwe to Holland, USA to Colombia and Russia to Australia.  What are some of your most memorable performances around the globe?

PJ: "One of my favourite performances was at the Zimbabwe Stadium, it was extraordinary.  In Zimbabwe they love music, and in Senegal, and in different countries like Colombia.  They had a festival there in Cartagena, it was fantastic.  We played together with different musicians, Cuban, Caribbean, American and African musicians, it was unbelievable.  In Zaire (Democratic Republic of Congo), when I was very young, I was part of a festival organized for the boxing match between George Foreman and Muhammad Ali, and a lot of musicians from around the world took part, Ray Barretto, Mario Pacheco, Manu Dibango, Celia Cruz, James Brown, José Feliciano and Santana.  I played here with 'Veve de Verckys', and was able to meet a lot of these musicians back stage.  This was a great experience, to meet the best musicians in the world.  In Congo-Brazzaville I was in a band called 'Super Boboto' S.B.B., and we played with Trio Madjesi, one of the best bands in Africa.  With my band 'Kass Kass' and Abeti Masekini we played together with Baba Maal and Youssou N'Dour in Senegal, Mahlathini Queens in Burkina Faso.  In Liberia, Zimbabwe and London we played with Sam Mangwana, and in France and Ethiopia with Essous Jean Serges and Teo Blaise.  Washington, Los Angeles, San Francisco and Chicago were also favourites.  In Los Angeles I played with the 'Four Stars' and Tabu Ley Seigneur Rochereau & Afrisa International Orchestra, in London with Mose Fan Fan, in Colombia with Coupé Cloué, and in the Democratic Republic of Congo with Franco."

Tell me about your latest compilation album.  From what sources is the music taken from?

PJ: "My first compilation was 'Kass Kass Connection', and that album didn't have a lot of old songs on it, so now I have taken the best from each of the albums I have produced in the past, to come up with the very best of the history of Passi Jo, 'Kass Kass Tout'.  All my fans, from different countries, have supported me for a long time, so I wanted to come up with something for all of them."

PJ: "At this time I have a lot of projects, in Australia and in the rest of the world.  With the business relationships that I have created so far, I have many opportunities.  I am planning to tour Australia for the first time as 'Passi Jo', commencing in Melbourne, it will be unbelievable.  The date is not set yet, but it will be around October, and after this I plan to continue, to tour Europe, and if possible I will also include Africa and America."