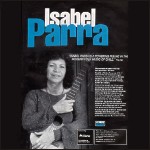 Andrián Pertout speaks to Isabel Parra from Santiago about the essence of La Canción Chilena or folk song of Chile.

Isabel Parra, daughter of Violeta Parra, began her musical journey in the shadows of her talented mother, who was at the time undeniably one of Chiles most famous and publicly acclaimed writers, folk singers and artists.  With roots in Santiago, Chile, Violeta initiated her tours of the Chilean countryside, collecting the songs and stories of miners, farmers and villagers, and later incorporated her daughter in her artistic wanderings.  This is the principal source of inspiration that would later define the direction of daughter Isabel Parras career, because once an artist in her own right, she would attain the identity as leading figure of the Latin American New Song Movement or Nueva Canción.  Upon the coup détat orchestrated by General Augusto Pinochet in 1973, Isabel was forced to flee the imminent persecution of military rule, and therefore lived in exile for the next decade or so in France and Argentina.  Ironically, in 1988, her contribution to Chilean culture and folklore was recognized with a Golden Laurel award.  Daughter Tita Parra is also a singer, and now this rich musical tradition is being transferred to yet another generation of Parras, with grandson Antar Parra, representative of the fourth generation of musicians in the Parra family tree.

Tell me a little about your musical upbringing.  In what way did your mother, Violeta Parra, influence your fate?

IP: My sister and I started out singing with her, when we were kids.  We grew up with her music, and grew up listening to her sing, and later on we joined her.  So it means that our everyday life was our musical apprenticeship, because we lived in a musical environment.  And my mother used to sing Spanish songs, conventional songs from Spain, and she used to move around in that musical environment.  She also used to sing with her sister, and singing the type of songs that you hear on the radio.  Later on, when she starts becoming Violeta Parra, she begins to collect folk music.  And I, because I lived with her, and when you live with a person, you hear what the person is doing, I also became a musician.  What the parents do usually rubs off onto the children.

As a self-described saltinbanqui, you spent a lot of time travelling with her throughout rural Chile, learning the songs and stories of miners, farmers and villagers.  How do you remember this wonderful episode in your life?

IP: No, I didnt travel with her collecting music.  You know, people make things up or give inaccurate accounts.  I heard the songs she did at home, and then I began to sing other music as well.  But I did travel with her to work with her, doing recitals, singing, recording albums, but not to research music.  So that is why I think I am not a folklorist, what is understood to be a folklorist, in the sense of going out to research, and looking for the source of peasant folk music.  I didnt do that, I learnt it at home, because she did that.  But travelling with her occurred very frequently, because Violeta used to do a lot of recitals.  And I think that she was the first artist in Chile that presented recitals that were real recitals, real types of folk.  What she used to research in the countryside, she would learn to play, and incorporate into her musical life.  And in that incorporation she used to involve us, because we were kids, and we used to learn some songs, dance the cueca, and sing different types of song form, as well as original songs by Violeta.  And this is to say that it was her that would practically put together a repertoire, with us being so young.  After then we began to make our own musical decisions and sing what we wanted to, but initially, the base is next to her in recitals, in Europe, France, Switzerland and eagerly, Chile.

What do you regard as fundamental to being a Chilean?  What is deep inside the hearts of the Chilean people these days?

IP: I can tell you about the music that is in the hearts of the people.  For example, I can tell you that an anthology of Violeta Parra has been released.  And just recently, of twenty-four songs, which has been a total success.  The people have been captivated with that reencounter with Violeta.  Now, the popular song, the type of song form that we did had a very important ideological compromise.  That popular song I would say is nearly forgotten, there is a group of people that love it and remember it, but theres no dissemination for that music in Chile.  There is dissemination in existence of that only on the level of la micro or the bus.  The bus drivers sing those songs, but the media dont care, and they dont care because its a song that is compromised.  And because in some ways there was a great backlash in Chile, because of the loss of identity, as to what is popular and what is Chilean roots.  Thats how it is, its a grief state of affairs.

How would you describe the essence of the Latin American Song Movement or La Nueva Canción?

IP: I think that La Nueva Canción was a movement and still is one that has a tremendous importance to make a connection with Chile.  The groups marked a milestone in the musical history of Chile, and it is unknown at this moment or badly diffused.  I think the situation will be reversed, and thats how for example in France people study The New Chilean Song phenomenon, books are written about it, doctorates are done and theses are done.  I think that will arrive in Chile rather late, because here, theres been a cultural backlash of great proportions.  And so all those things are pending I would say.

Do you have a particular mood or feeling that you try to capture with your own lyrics?

IP: I have just auditioned for an arts fund, and I am recording a new album, of fifteen new songs that I have written this year.  Anyway, what I try to put on paper are things that worry me, everyday life things.  They are feminine reflections, and feminine not in a feminist sense, but meaning a feminine voice in this macho environment that is the country of Chile.  We, the women in Chile, are left behind in social life, because the lives of the society is driven by mens determination here.  So the woman is relegated to a second strata that is very noticeable.  So my song wants to break that barrier a little, and speak in a feminine voice, in the voice of a Chilean female of this era.  So the songs talk about what happens to me personally, about what I feel, and the themes that are embraced are varied, theyre of diverse content.  I would say that basically the song that I sing is a reflective song.  A song of reflection, songs that are not very appropriate for the masses, they are rather songs to be listened to in a simple way.  Now, I find that Im a person who creates texts, and adds music for a tremendous expressive necessity.  This is my way of letting of steam and manifesting what happens to me, I do it with songs.  Theyre not songs for someone to say, Gee, how beautiful you sing, how entertaining.  No, I would like people who hear them, to be touched a little by them.  Well, not a little, to be touched a lot (laughs).

A performance celebrating four generations of the Parra familys music seems quite a special treat.  What will be the main focus of your upcoming Australian visit?

IP: Im coming with my daughter and my grandson, and its the natural progression, because then my grandson will perform with my daughter I suppose.  This occurs in a simple way, theres no need for a very extraordinary plan for that.  I have worked with a lot of people, with a lot of groups, in many musical settings, but my everyday musical life revolves around my daughter, my grandson.  I sing alone, but now its a great pleasure to do that because I am performing with an adolescent Chilean child that doesnt have any prejudices or complexes about performing with his grandmother and his mother.  Lets say that hes not macho, and that is really nice.  His name is Antar, and he plays guitar very well, he studies jazz and plays popular guitar as well.

Isabel Parra will be performing at the Playhouse, Victorian Arts Centre at 8pm, Thursday, October 28 and Saturday, October 30, and will be accompanied by her daughter, Tita Parra, and Titas son Antar Parra in a performance celebrating four generations of her familys music.  For further information visit the Isabel Parra Web Site on the World Wide Web. I would like to thank Alexander Pertout senior for his assistance in the English translation from Spanish.