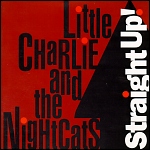 With a new album out and an upcoming tour of Australia, Andrián Pertout speaks with guitarist Little Charlie Baty from California about the Nightcats and blues in the 90s.

1996 may prove to be a very special year for Little Charlie and the Nightcats. As well as currently celebrating their 20th anniversary, they have a first time nomination for the WC Henty Award for best blues band. Little Charlie says, 'It's an honour because there's so many great bands, and we really think of ourselves as a band, as opposed to like a star with a backup band, so we're nervously awaiting the results.' At the end of the interview he also tells me that they have a brand new bass player on this tour, and that his name is Vance Ehlers. I say to him, 'Not the guy on the record?' And he says no, but that he almost looks exactly like him so they're using the same picture. Even though we're continents apart he seems to sense my 'but I like the bass player on the record vibe' because next he reassures me that he's a really good bass player and that he's really looking forward to coming to Australia for his first time.

When I listen to your guitar playing I get a sense of your many diverse musical backgrounds. Tell me about the music that moves you?

LC: "Well, I listen to a lot to swing guitar and early bee bop music, and that's probably my favourite personal kind of music. I love blues, and I love the early kind of Chicago blues by people like Little Walter, Muddy Waters, because it has that element of swing in it. My two favourite musicians are Charlie Christian and Charlie Parker."

How did you serve your apprenticeship as a musician? Were you fortunate enough to always work within the music industry or did you have to do other things for money?

LC: "Oh yeah, I've had a variety of jobs, though I've played music. I guess I've basically had my own band since I was about thirteen, and I started out as a harmonica player, and it was always sort of a side line thing to have a blues band for me, and as I went through college and got other kinds of jobs, I just always did music too. And then one day it got to a point where I realized I could make a living playing music, and so we started making records and signed to Alligator Records, and then the rest is history."

The nucleus of the band has been together for twenty years. A great achievement for any partnership. Do you now have an understanding that's like second nature?

LC: "Well yeah, pretty much, I mean, Rick and I have been together for twenty years, and I can sort of tell where he's gonna be going when he's playing the harmonica, when we get together and arrange songs and everything. I sort of understand some of his mental processes when he's writing tunes, the kind of chords he likes to hear and stuff like that. So yeah, it makes it a lot easier and it's also interesting to grow as a team like that because you end up absorbing all these different influences that individuals have, and bring them into this group kind of sound. And that's why I think we have a really unique sound, 'cause we've been together for twenty years."

Has the ideology behind Little Charlie and the Nightcats changed at all since you initially formed?

LC: "Yeah, I think so. When we first formed, Little Charlie and the Nightcats was a name that was given, a sort of a tribute to Little Walter, because his first band was called Little Walter and the Nightcats, and we primarily did early Chicago blues. First we started doing different kinds, you know, broader kinds of blues based songs, like maybe a little of r&b and little bit of even rockabilly, things like that. Kinds of music that people could dance to but something that was still blues based. And then over time we did more and more original material, and now I think we do probably 80 to 90 percent of original material."

Rick Estrin's fancy blues harmonica really shines though on this album. How did he start out in music?

LC: "Rick started out as a harmonica player and he was playing in some of the black clubs in the late sixties. As a teenager he would go down and sit in with people like Lowell Fulsom, and he toured with Travis Phillips, who is a blues legend out here, and he toured with Roger Collins, and then he went out to Chicago and played with people like Johnny Young and Johnny Little John, and played with Muddy Waters. He was going to go out on the road with him but there was some kind of a misunderstanding and it never happened. But he really was out there actually playing with the blues legends themselves, whereas I was just pretty much listening to records and getting high school bands together, and going out and playing. But yeah, he was always into that and he got better and better on the harmonica. His singing style, I think has evolved a lot, 'cause when he first joined the band he was a lot quieter, he tended to look down more when he sang, and he was more of a reserved kind of performer, but now I think he's a lot more outgoing and more of a showman."

How would you describe your approach to the music in the studio? Does it differ in any way to the way you handle your live performances?

LC: "Well, I think that we've learnt in the studio that we could try to make things sound more live by doing more direct to tape kind of things instead of doing a lot of overdubs, it sounds better, because when we try to do too many overdubs and make a record sound too perfect it just didn't have that spontaneity, and it didn't have the kind of excitement that I hoped the band could generate in a live show. So we try to keep that same kind of spirit going. But you do have more options available to you in the studio, and as we've done more and more studio records we're finally getting more comfortable in there."

What made you use Robert Cray's Jimmy Pugh on keyboards? Had you worked together before?

LC: "He's been on all the records that we've had that have had keyboards. I think going back to 'The Big Break' which was our thirds record. That was the first time we used him and then we used him on 'Night Vision' and also on 'Straight Up!' It's funny, I mean, we've known Jimmy for a long time but we just recently this year actually had him play with the band at a live show for the first and only time, and it was a lot of fun. I wish we could afford to have him all the time but between playing with Robert Cray, Chris Isaak and Etta James he's a pretty busy guy."

Having toured here before how would you compare the music scene in Australia to that of the US? Do audiences react to you in the same way?

LC: "I think they're very similar. I find that the Australian audiences are very educated. When people come up and ask questions about music, I can see that they've done their homework. They're good in the sense that they tend to get emotionally involved, they'll dance, and they'll make noise. They're into what's going on instead of just strictly being observers, which is what I find in some of the European countries. We'd rather be part of a party instead of just being the painting up on the wall or something."

After your Australian tour do you have any interesting projects that await you back in California?

LC: "Well, when we get back from Australia we're gonna have to basically get right in a van and drive across the country. We've got about a five week US tour going and then we're gonna go over and do this cruise in the Mediterranean. We've done a blues cruise in the Caribbean but this is the first one we've done in the Mediterranean, which has a lot of European bands on it too. It will have John Mayall and Otis Grand, in addition to some of the American groups, so we're looking forward to that. Later this year we're gonna start on our next record, and I'm also hoping to do either later this year or early next year my first solo record on Alligator, where I'm going to get a chance to play some more swing and bop stuff."