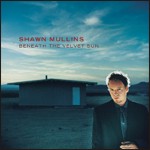 Beneath the Velvet Sun

With the release of his new album Beneath the Velvet Sun, Andrián Pertout speaks with Shawn Mullins about life before and after Shimmer.

Shawn Mullins is certainly one of those classic overnight success stories with eight albums released independently prior to his 1998 RIAA platinum Columbia Records debut of Souls Core, which not only went on to produce the smash hit single Lullaby, but also Songs from Dawsons Creek soundtrack album sensation Shimmer, consequently landing him straight in the middle of pop musics world of fame and fortune.  His latest album is titled Beneath the Velvet Sun, and a follow-up to The First Ten Years, which was a compilation mainly dedicated to his indie past life.  Featured in this new release are the production partnerships of Shawn together with producers Anthony J. Resta and Julian Raymond, along with numerous notables in the musical department.

Tell me about life previous to the Shimmer and Dawsons Creek episode.

SM: I toured for about ten years before I was signed to Columbia, and I made my own records.  I put out eight independent records, and the eighth one was called Soul's Core.  It had a song on it called Lullaby, and a little radio station heard that, put it on the air, and it sparked a bunch of interest  and thats how I got signed.  And that song became known as Rockaby, but its called Lullaby.  But before that it was a lot of independent work.  You know, I spent a good ten years or so travelling around the US in my van with my dog, and selling the CDs right out of the back, and at the clubs.  And I actually really enjoyed it.  It was a good life (chuckles).  Its really not changed all that much, except financially.  And theres a lot more attention on my music, a lot more fans.  But the roads kind of the same.

How did popular success ultimately come about for you?  I guess Im referring to Shimmer, which seems to have been the biggest thing for you in Australia.

SM: Well, I dont know.  What do you think?  Was Lullaby bigger or Shimmer bigger here?

Maybe Im speaking for myself

SM: Thats great!  Im glad you liked that one a lot.  Well, I can definitely tell you this; in this country Shimmer sent my album to Platinum, without a doubt.  And that was largely to do with the Dawsons Creek soundtrack.  But it was also on my record, so it sold tons of records.  And that was a song that I wrote like six years ago.  Although all the songs on Souls Court but that one were pretty new, but Columbia and I both decided that we should put Shimmer on the album, record it and give it a shot cause its a great song.  So thats how all that came about.  And yeah, it was just one of those things where you get a call that says somebody from Dawsons Creek really likes your stuff and they wanna know if you wouldnt mind having a song in an episode.  And the next thing you know youre on a soundtrack thats like platinum in Australia.  So, its cool.

What is your approach to songwriting from both lyrical and musical points of view?

SM: You know, I do it different ways, I dont have a set method.  I do a lot of journaling, a lot of kind of diary writing, and songs tend to come out of that.  You know, lyric ideas, rhymes and maybe subject matter.  I do all that kind of writing in my journal and also revealing my own neurosis at the same time (chuckles).  But musically speaking, often times a melody is in my head before there are any even words.  And its typically a tune that starts, just like anything that Ive had on the radio  thats how that hook or whatever it was, and the chorus came about.  You wake with it one morning, or it creeps into your head  possibly because its already someone elses tune (laughs).  Hopefully not, but that certainly happens a lot.  You have to kind of find out while youre working out songs, Oh gees, thats a Beatles song, no wonder I like it so much.  But for me its a really wonderful experience, writing songs.  Its something that Ive done since I was about twelve years old.  So Ive been writing music for a long time.

I though I wrote Smoke on the Water when I was twelve.  I was very disappointed when I found out it wasnt mine

SM: You did? (Laughs)  Thats when I learnt to play it, when I was about eleven or twelve, right on!

And you seem to place just as much importance on words as you do on music, from what I can see

SM: Yeah, Im a storyteller, but at the same time the music and the structure, the whole arrangement of the song is so important to me.  I produce my own records, so thats as big a part of it as anything else, to make a record sound good, and actually really work from one end to the other.  So yeah, I think musics probably at least fifty percent of what Im about.

How did the production partnerships with Anthony J. Resta and Julian Raymond work on your current album Beneath the Velvet Sun?

SM: I first started working with Anthony on the Shimmer recording, and the guy blew me away.  Hes a great drummer first of all, but what he does is he typically records himself or other drummers playing different types of four- or eight-bar loops.  And what I learnt from him is that you can always make a real drummer sound screwed up, but you can never make a drum machine sound like a real drummer!  Ever!  I dont care what anybody says.  Theres nothing out there that sounds real, except for the real deal.  So yeah, he taught me a big bit on that end of things, and I might have taught him a bit some orchestration ideas.  So it was really a fun meeting of the minds.

And as far as Julian Raymond goes, Julian and I first met working on the song Lately, which is on The First Ten Years thing that we put out.  And Julian had mostly been known for his work with Fast Ball.  But yeah, hes a great producer, and hes a really kind of a rock guitar guy.  Thats his background.  And Julian not only helped produce the track Amys Eyes but co-wrote it with me.  He came in with these lines, She gets high, she gets low, but she lives her life straight just like Serpico.  And I was like, Man, no one talks about Serpico!  Thats hilarious.  So theyre both so creative, and great producers.  And I was probably more of a musical arranger on the end of production.  You know, I dont necessarily get worked up about verbs and delays, and stuff like that.  What I tend to do is worry about what an arranger used to in the old days, Lets make all these parts fit just right, and, Lets not put too much in it.  When you have drums, bass, guitar, organ, and electric guitars as your base band, thats already plenty really (chuckles).  We averaged fifty-five, sixty tracks on most of these songs on this record, but a lot of its subtle, loopage and soundscaping little things.

You have been quoted as saying, I cant just make a simple acoustic record.  What are some of the sounds that you experiment with on this project?

SM: The Mellotron, and you might have noticed an instrument called the Omnichord.  Its like an electric Autoharp, and theyre really funny.  Its like this battery-operated thing thats kind of cheesey.  Its just this weird sound, and it has a bell tone that you can rake.  It looks like a comb, and you can rake it to go, Brrring!  Or you can punch the different bell tones.  And then it has kind of accordion chord buttons down below, that can, Eeeh, eeeh, eeeh, eeeh.  So that was something that I used a few times on the record and Chris Lord-Alge did his best to mix it completely out (laughs), because its such an offensive sounding instrument.  He was like, Jesus Christ, its the Omnichord again!  He was so funny.  Hes like the God you know (laughs), but he was hilarious about the Omnichord.  But yeah, a lot of old keyboards too  we used Moog and Prophet.  And we also used the new keyboard, the Nord Lead 2 quite a bit.  And then we used stuff like the Moogerfoogger (Moog MF-101 Lowpass Filter pedal).  As far as stringed instruments go, anything from guitar, acoustic mandolin, twelve-string, and lots of electric tones.

How did you decide to use the Mellotron?

SM: And Chamberlin as well.  Well, first of all the Beatles, thats the first thing that comes to my mind, growing up listening to that stuff.  And also, the first time I heard Stairway to Heaven

SM: Yeah, a lot of people dont even realize thats what that is, but I remember as a kid wondering what that was.  But Im a big fan of Aimee Mann and Michael Penn, and a lot of that stuff that comes out of that scene.  And Michaels cat plays Chamberlin and Mellotron, and actually knows the Chamberlin family.  And theyve kind of left him a lot of old tapes and stuff, like cricket sounds and weird stuff that people dont even know thats available for Chamberlin.  His name is Brian Kehew.  But those cats tend to use those Mellotron and Chamberlin in a really, really great way, in modern alternative pop music.  So its just kind of my tribute to that sound, I just love it, and its also a cheaper way to get strings (laughs).  Cause its real strings and its taped!

SM: Im going to spend another week here.  Im leaving Melbourne tomorrow, and going back to Sydney to do a flood relief benefit concert.  Triple M was really cool to jump on board.  I was watching the news, and thought that somebody should do something.  I thought we should do a little concert, and so I mentioned it to Triple M and now its this huge thing, its just great!  Its actually going to pan out to be something that is helpful.  So Im excited about that.  And then Ill be touring America a good bit, and Ill probably be back this way March or April, sometime around there.

Beneath the Velvet Sun out on Columbia Records.  For further information visit the Shawn Mullins Home Page.