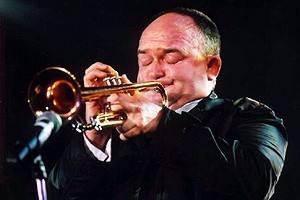 So Far So Good

Andrián Pertout speaks with multi-instrumentalist and jazz legend James Morrison about his experience with Lalo Schifrin and the London Symphony Orchestra, his own brand of jazz philosophy, and his latest release ‘So Far So Good’.

“James Morrison is, by anybody’s standard, a virtuoso in the true sense of the word,” states his biography. And this is no exaggeration, as Morrison – who incidentally was acknowledged in 1997 for his service to the arts in Australia with a medal of ‘The Order of Australia’ – marked his international debut at the tender age of sixteen with a memorable concert in the USA at the Monterey Jazz Festival. And contrary to common knowledge, not only does the man play the trumpet, but also the trombone, euphonium, flugel horn, tuba, saxophones, and piano. Today, his credits include performances at all the major European festivals, including the Montreaux, Pori, North Sea, Nice and Bern; blowing his horn with such luminaries as Dizzy Gillespie, Cab Calloway, Woody Shaw, Red Rodney, George Benson, Ray Charles, B.B. King, Ray Brown and Wynton Marsalis, among many. He can further claim to have performed at the world’s most famous jazz clubs, such as the Blue Note and Village Vanguard in New York, the New Morning in Paris and Ronnie Scott’s in London. And if that’s not enough, there have also been Royal command performances for Her Majesty Queen Elizabeth II, for US Presidents Bush and Clinton at Parliament House in Australia, and for Princess Anne at the Royal Albert hall and Royal Opera House, Covent Garden with the London Philharmonic Orchestra. Not to mention his association with the great Lalo Schifrin and the ‘Jazz Meets the Symphony’ project of 1993 with the London Symphony Orchestra.

What was your initial attraction to the trumpet and to music in general?

JM: “Well, I started a brass band at school. So I guess, the brass was all around me, but the trumpet really grabbed me when I first heard Louis Armstrong play. And the trumpet in jazz is kind of like the lead guitar in rock. It’s the same sort of thing. It plays the lead. And it’s the thing where if you’re gonna scream over the band, you do it on the trumpet. So that’s what I wanted to do. And if I was playing guitar, I wouldn’t be playing rhythm or bass.”

How would you describe your own style and technique? Is it something that you adapt in the shift from jazz to more classical environments?

And is it something that you research as a player? Do you research different techniques, or does all that just come naturally?

JM: “For me, I just play. I always have (laughs). Everything that’s come along, when I’ve developed some new technique, has come from just playing. I’ll give you an example. Like circular breathing, people say, ‘Wow, how did you learn that? Where did you learn it? How long did it take you to learn?’ And I say, ‘Look, I was just on the gig one night and I started doing it.’ Because I needed to. I’m sure, subconsciously, you work these things out, but I don’t consciously sit down and practice things like that. So it’s definitely a natural type of thing for me, which suits me down to the ground because I’m really lazy (laughs).”

How do you keep up playing a few different instruments?

JM: “I treat that very casually too. Whatever I feel like playing on the gig, that’s what I pick up. So when I’m leaving for a gig – I’ve got all these instruments in my garage – I lift the boot of the car and go, ‘What do I feel like playing tonight?’ and then throw it in the boot. And I’ll always take a trumpet, a trombone, and maybe a saxophone. It started out as just being curious, like kids are, wanting to try other stuff, and the difference with me is that I kept doing it.”

And do you actually practice at all these days?

JM: “No. As a kid I did a lot of jamming, getting together with people and jamming, and that was my practice. I was never one to be on my own and do scales, or anything like that. So I never have, and I’m certainly not going to start now (chuckles).”

Tell me about the ‘Jazz Meets The Symphony’ experience with Lalo Schifrin and the London Symphony Orchestra. What can you tell me about working with this great pianist/composer?

JM: “Oh, he’s phenomenal. I like to quote Ray Brown, the great bassist, who’s worked with everyone from Count Basie to Duke Ellington, you name it! Well, he was on a few of the recordings with the London Symphony, and as we finished this particular new piece we played of Lalo’s, which was just amazing, Ray looked over at me and said, ‘Man, he’s a real bitch with a pen!’, which pretty much sums it up (laughs). He’s a great composer, a great orchestrator, and for me it’s great because when I first started working with him I was playing a trumpet part, but now, when he writes something, he writes specifically for me, not just a trumpet. Because he knows what I’m capable of and what sounds good, and what stylistically I like to do. And so he has written a few pieces now for me to play rather than just the trumpet to play. And when you’ve got someone like that writing specifically for you it’s just fantastic.”

And when someone does write specifically for you, how closely do you work with them?

JM: “It varies, depending on the person. Lalo just needed to hear me play quite a bit. And from that he writes. He doesn’t talk to me about it at all. So he ascertained what I could do from hearing me play. Whereas with Allan Zavod it was different. I remember having been to some function at Darling Harbour. We were in the car park, and it must have been funny for the patrons leaving, because we’re in this underground car park, at the boot of my car; I get my trombone out, and I’m playing him a few CV sort of things, showing him some lines, showing some techniques and different sounds, and talking to him about what I can do, what sounds good for me, and some things I’d like to do. So that was much more getting involved with actually playing some examples, and talking to him about it, and then when he was a reasonable way into it, I had to listen to what he’d done and try it, talk to him about it, and so on. So yeah, much more getting involved with Allan. Coming up I’ve got a concerto that’s been commissioned for Mark Isaacs to write, and another one for Graeme Koehne to write, so I think there’ll be two different approaches again. I think Mark Isaacs is going to be very hands on. He wants me there while he’s writing.”

Allan Zavod’s jazz trio and orchestra concertos for trumpet and trombone essentially represents the fusion of jazz and classical styles and approaches. How do you feel about this genre?

JM: “It was very successful, but when we say, ‘Let’s have a fusion of classical and jazz,’ we’ve got to bear in mind that that in itself is as broad as jazz itself. If I said to you, ‘I’m going to play you some jazz,’ you know that that could be anything from traditional Dixieland jazz through to some really heavy fusion. And it’s still jazz. So in the same way when Lalo writes ‘jazz meets the symphony’, and when Allan writes a blend of classical and jazz, they’re as different as Dixieland and be bop. And so you can’t pin it down as a thing. ‘How will classical and jazz be?’ It depends on which classical and which jazz.”

Tell me about some of material included in ‘So far so good’, the best of James Morrison.

JM: “Well, that was an interesting exercise. It was a matter of what to leave out, because I sat down and made a list of all the things I’d like to include, and I think it was about five CDs. So it was a matter of, ‘Now what do I leave out?’ And trying to represent various different facets of what I’ve done. And really that’s what it was about. It was partly saying, ‘This is my favourite stuff’, and also saying, ‘This is a representation of the different areas that I’ve been into’. And so it’s more my favourites from each area rather than overall.”

And you’ve got the 2002 Electric Jazz Festival with Scream Machine coming up. What can people expect to hear?

JM: “We will be pretty much playing material straight from the album ‘Scream Machine’. And so that’s largely original, but there are a few things on there; a Herbie Hancock piece, a little bit of Ellington, but mostly original compositions. And it’s all about, ‘What does it sound like when you get five trumpets, and let them off the leash.’ And the rhythm section has to be right, it’s gotta be a heavy electric rhythm section that can really go with the trumpets, wherever we want to go, really lay it down, because it’s gotta be really funky but also have some elements of heavy rock, or even heavy metal. And I think all that goes so well with the trumpet, played that way. Like I said, the trumpet’s the lead guitar. And this is sort of the heavy metal of jazz…”

‘So far so good’ and ‘Scream Machine’ out on Morrison Records, and distributed by Warner Vision. James Morrison will be performing in Melbourne with Scream Machine at the Atheneaum Theatre on Sunday, December 1, 2002. For further information visit the James Morrison Home Page.