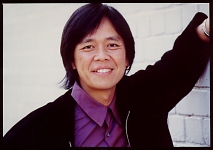 Andrián Pertout speaks with Chong Lim about Roland keyboards, and his latest musical adventure with the Sydney 2000 Olympics.

Keyboardist, composer, producer and Roland clinician Chong Lims musical career has been going from strength to strength in recent years, and what began as a stint with Venettas Taxi and the Gospel Jubilee band has developed into associations with the Eurogliders, Germaine Jackson, John Farnham, Tina Arena, legendary Beatles producer George Martin, Boz Scaggs, Kylie Minogue, Tommy Emmanuel, Human Nature and Olivia Newton-John, among many.  Today, his credits as musical director include television game show Dont Forget Your Toothbrush, The Logies presentation on Channel 9 and Aboriginal musical Bran Nue Dae.  He was also MD on The Main Event Australian tour with John Farnham, Anthony Warlow and Olivia Newton-John, and performed on Kylie Minogues Intimate and Live and John Farnhams I Cant Believe Hes 50 tours, as well as on the recent Tour of Duty Dili concert.  His latest production excursions include John Farnhams 3 1/3 album, as well as the ongoing Spirit Of Christmas album project, which to date has included artists such as Christine Anu, Deni Hines, Lisa Edwards, Glen Shorrock and Kylie Minogue.  In 1998, Chong composed Crown Casinos atrium music, and in 2000 went on to accept the ultimate commission  music for the opening and closing ceremonies of the Sydney 2000 Olympic Games, which involved the Sydney Symphony Orchestra, Melbourne Chorale and National Boys Choir, and was performed to over 4 billion television viewers worldwide.  His contribution to the Games of the XXVII Olympiad additionally including the production of tracks by John Farnham and Olivia Newton-John, Nikki Webster, Vanessa Amarosi and Kylie Minogue.

What have you been up to lately?

CL: I suppose this year, my major thing was the Olympics.  I started work on it on and off from about March, and from a three-minute submission came this eleven-minute piece.  Its called Nature, and it was for the bit that showcased all the native flora and fauna of Australia.  And then I ended up also writing this piece called The Journey of Angels, which is a piece for the Olympic flag going around the stadium.  I had to write another piece in a hurry actually.  That was the last thing I did, like the week before the Olympics.  I handed it in like three or four days before the opening.  And then I was also asked to produce three pop songs in the opening ceremony.  And thats Dare to Dream with John Farnham and Olivia Newton-John, Southern Skies for Nikki Webster and Heroes Live Forever for Vanessa Amarosi.  But those pop songs are not just ordinary pop songs, each and every one of them had an orchestra and a choir.  And I did stuff for the closing ceremony.  I had to re-work some bits of The Journey of Angels, to make it fit in the closing.  And I produced Dancing Queen for Kylie, and actually, the next day Terry Blamey, the manager got a fax, cable or email from the ABBA guys, Bjorn and Benny, congratulating us on our version.  I also produced the song that Nikky Webster sang when the flame went out, Well be One.  And in between all that, in February, March and April I was working on John Farnhams new album 33 1/3, and in April I was doing the Logies, all criss-crossing.  And then just to top it all off, about three weeks before the Olympic Games I was touring in Asia for ten days with Olivia Newton-John.  And that made it really hard to make the record; everyone was on my back.  I did a few Optus commercials and produced a few tracks on the Myer Christmas album as well, for Kylie Minogue and Glen Shorrock, which is actually launched today.  So Ive been doing a few things.

Do other people become involved in your projects, or is it mainly a one-man show?

CL: Well, obviously you have to involve musicians, and you know, my favourite rhythm section of Angus Burchall, Joe Creighton and Stuart Fraser.  Theyre always involved.  And singers are always involved.  But Im pretty well prepared, I have already worked out some ideas of direction for the piece  the tempo, the groove, the unusual chord changes  whereas some people go in an rely on the rhythm section.  Theres no right or wrong but thats the way that I work.  But also, Id done a lot of sessions in the past where Id go in and nothing had been done, and I was really sick of that.  I also felt rather disturbed by the fact that you have to do all this work when youre going in to play, so I always feel like I have to do a lot of homework so that the band knows what I want.

How do you approach bigger projects that involved orchestras?

CL: With orchestras, obviously, you have to involve the orchestrator.  And depending on the magnitude of the job and how much time I have, sometimes I do use orchestrators, and conductors  if I dont have the time or when the piece requires more work than I can put in while Im trying to write and produce.  And also, its hard when youre working with an orchestra in a live room, and then have to run into the control room and check.  So you have to decide, do you want to conduct or do you want produce.  And I find that when things are not working you can hear it in the control room, and you go, Right, Mr conductor, that should be C sharp not C, or, Hold that note longer, or Thats not working, that should be double forte, not mezzo forte. You know, stuff like that, that is harder to hear out there.  And you can make decisions like, OK, bars 29 to 45 are happening, move onto 46.  And the conductor says, Oh no, its fine, but you can hear it in there, because out there, its very hard, the conductors performing as well.  So it depends on the magnitude of the job  sometimes I do the whole thing myself from copying, to orchestrating, to conducting, but other times, when its huge, you have to let go and let others share in the creativity.

I know that you are sponsored by Roland, but do you use any other gear?  I suppose I would like to get an idea of what you like without making it sound like a Roland ad.

CL: Well, unfortunately it will sound like a Roland ad, because I do love Roland.  Not because Im sponsored by them, but because I do love the sounds and the operating system.  A lot of people complain about the Roland operating system, but I love it because Ive been with it for so long.  I can honestly open a Roland synth from the box and start to work on it, whereas with other synthesizers I have to have a steep learning curve to understand their way of thinking.  And of course I have had a hand in helping them develop their synthesizers.  One of my biggest involvements was with the XP-50, XP-80 series and the JV-1080 series, which still remain today.  So I understand the operating systems of those synths really well, and I love the sounds.  So basically in my studio my main keyboard is the XP-80, and it still triggers JV-1080s, JV-2080s and S760s.  I have so many sounds on the S760, and I know the library so well that its very hard for me to switch.  But sequencing wise I do use a mixture of Cubase and Logic (using a G3 Power Mac with two screens, 21 and 19), depending on the situation, and I use the Digidesign 888 interface, although I find a lot of inadequacies in it at the moment, because it doesnt talk to Cubase very well.  So I have to make up my mind whether I want to permanently switch to Logic or I need to look at how I work my system.  I had been using a Yamaha O2R digital mixer, but now Ive switched over to the Roland V series, which is fantastic, it sounds incredible.  And you know, its a newer device so its got more things, and I really love the fact that its a visual patch bay as well.  So unfortunately I have to tell you that even my mixer is now Roland (chuckles), but again, the reason is because it sounds great.  But synthesizer wise I do have a Novation SuperNova, and thats great.  And with the Roland system I also have the JP-8000, which is also great.  But I decided that I wanted something completely different in my studio, and I happened to stumble on the Novation, and it sounded great, so now I have two.  And there you go, I do have something non-Roland (chuckles), and I love both of them, they both serve different functions.  And also of course, on John Farnhams new album 33 1/3, I mainly use Wurlitzer and Hammond C-3, and there is a bit of Roland, but very, very minimal.  But then on tour I had to replicate all that, and its just too hard to take a C-3 on the road with two Leslies and all that, so Roland very graciously loaned me the double manual VK-77 (Drawbar Keyboard).  And it worked beautifully, I wrote down the settings I used on the album, and it sounded so close  really, the thing thats not the same about it is the fact that the C-3 is a mechanical instrument and querks.  And I used an XV-88, its their new mother keyboard, which I love, and a XV-80.  I suppose I am Roland biased, but I hope that Im using it not because they sponsor me but because they have great gear.

What you favourite synth of all time?

CL: Ill tell you what my favourite instrument of all time is.  Its got to be a dead heat between a Wurlitzer and a Hammond.  The Wurlitzer because its so funky, its just an unbelievable instrument, and a Hammond because its such an unbelievable beast.  You know, its like playing with this bull that kind of tries to take over, and youve got to fight with.  It never seizes to amaze me.  And synths, I love the Minimoog, I love the Prophet 5, the Jupiter 8 and the D-50