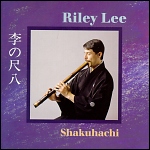 Riley Lee was born in Texas, USA, and moved to Japan in 1971 to study the shakuhachi under one of Japans great masters, Sakai Chikuho.  The shakuhachi or Zen flute is an end-blown bamboo aerophone originally introduced to Japan from China around 800 AD, later to be adopted as the spiritual tool of Zen Buddhism in the 15th century.  For the next eight years Riley endured the most puritanical of musical training routines imaginable, which involved practising barefoot in the snow, blowing into his instrument in blizzards, hours of Zen meditation and running, all with the least possible amount of sleep in unheated dormitories, under sub-zero temperatures.  On the conclusion of this memorable episode of notable dedication he was honoured with a place in the renown Ondekoza group of Japanese drummers and musicians, and additionally in 1980 became the first non-Japanese to attain the title of dai shihan or grand master.

As part of his Western education, he went on to complete a BA and MA degree at the University of Hawaii and a PhD degree in ethnomusicology at the University of Sydney.  The therapeutic nature of shakuhachi performance also led him to the development of a series of relaxation and breathing exercises designed for physical harmony.  He is the author of a number of scholarly articles, and has been a guest lecturer and performer at Harvard University, the University of Indiana, Eastman School of Music and the Universities of Melbourne, Sydney and Queensland.