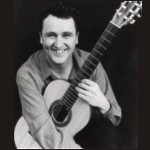 Journey to the Otherworld

Milan-born classical guitar virtuoso Gareth Koch, who in view of his classical-meets-flamenco playing style and his unique arrangements and compositions, has been previously described by the Viennese press as a magician, actually embarked on his musical quest as a student of the piano and clarinet.  He then went on to study the classical guitar at the Sydney Conservatorium of Music, which was followed by post-graduate studies at the Royal Academy Conservatorium of Music in Madrid and the Academy of Music and Dramatic Art in Vienna.  Gareth is today a renowned world-class performer, and has appeared as a soloist throughout Europe and Australia, touring with Herbie Hancock and Wayne Shorter during their last visit to the Great Southern Land.  Carmina Burana represents his follow-up to his Artworks debut Van Diemens Land, and in essence is a solo guitar transcription of Orffs famous large orchestra and choir work, while Journey to the Otherworld on the other hand is an exploration of twelfth century trouvere melodies.  He is currently employed by the Faculty of Music at the University of Newcastle, where he heads the guitar department, which incidentally, is responsible for running one of the only institutionalized flamenco studies programme in the country.

What do you regard as the contributions to your playing style of your musical studies in Sydney, Madrid and Vienna respectively?

GK: As an undergraduate in Sydney I had to work a lot on basic things like trying to produce a big sound and reduce finger noise.  The basic philosophy of my teacher in Sydney, Gregory Pikler, was to develop refinement, accuracy and a big dynamic range.  My teacher in Spain, Demetrio Ballesteros, had a more sensual approach to playing, and his relationship with a guitar was very natural  very physical.  My teacher in Vienna, Konrad Ragossnig, was a 'sound and vibrato' player who demonstrated a lot of subtlety and colouration in his playing.  I have a contrasting and diverse educational background, but as time passes, Segovia's comment about being one's own teacher becomes increasingly relevant.  I feel that each practise session becomes a teacher/pupil relationship.

How would you describe the essence of your guitar technique today?

GK: In my technique, which I look at principally as a 'sound' issue, I seek to combine a refined Viennese style of phrasing, a big sound and the fireworks of flamenco when either is needed!

Your solo guitar transcription and recording of Orffs Carmina Burana was certainly a most daring undertaking.  How did this come about?

GK: Because Carl Orff's Carmina Burana is huge cantata for choir, orchestra and percussion it is easy to lose sight of the fact that much of its substance is derived from German folk tunes and student songs.  Orff's own style too is often given to a clean directness, and he wouldnt have argued with the idea that the music of Carmina Burana has a simplicity, in the sense that that folk music also has.  The orchestral showpiece translates more readily to the guitar than you might think!

On the other hand, what are some of the musicalities that you explore on your latest album, 'Journey to the Otherworld'?

GK: The compositions on Journey to the Otherworld are very firmly based on 11th and 12th century monodies  trouvere songs, to be exact.  I encountered a variety of musical challenges as the original trouvere sources only give indications of pitch, and at best, the vaguest indications of rhythm.  The task of reconstructing and clothing each melody turned into a series of musical adventures.  In 'Taste of the Fountain', for example, the opening is a simple monody, but as the piece develops the harmonizations become subtly more complex.  In 'Song of Devotion to the Virgin' a first inversion D minor chord in the bass evokes the bells of the cloister calling the pious to prayer, which continues throughout the piece.  The middle voice however, is constantly moving, forming a counterpoint against this and the melody, which is unchanged and faithful to the sources.  It is perhaps worth mentioning that none of the melodies on 'Journey to the  Otherworld' have been changed.  The medieval ingredients remain intact, but the recipes and method are original.

How is your music communicated differently to a live audience?  Do you have a certain approach in the studio that you abandon on stage?  And more importantly, do you feel that you produce more or less the same quality of performance in both settings?

GK: A live performance for me is more 'physical' than a studio recording session.  The audience becomes part of the performance and the experience on stage is more intense  more 'alive' than in the studio.  Achieving maximum quality in terms of tone production, dynamics and phrasing is critical in both studio and stage environments.

Tell about the flamenco studies programme that you co-ordinate as head of the guitar department at the University of Newcastle.

GK: The Flamenco Studies programme at the Faculty and Conservatorium of Music in Newcastle is the only one of its kind in Australia.  Students are given the opportunity to learn flamenco at a graduate and postgraduate level.  Flamenco is taught in the traditional way, without music, and the techniques of rasgueo, alzapua and more importantly, the concept of compass (pulse and rhythmic structure in flamenco) are fully covered in an introduction and advanced course.

What are some of your upcoming events?

GK: I am touring South-East Asia in April 2000 for Musica Viva, playing excellent new compositions by Australian Composers Phillip Houghton and Robert Davidson.  They have both written works for guitar and string quartet.  I will be recording an album of Bach, Weiss, Handel and Kapsberger on my new Simon Marty eight-stringed guitar around midyear.  In October 2000 I am doing an Australian Solo Recital tour.

Journey to the Otherworld, Carmina Burana and Van Diemens Land out on Artworks.  For further information visit the Gareth Koch Home Page.  Email: gkoch@classicalguitarist.net or order@artworksmusic.com