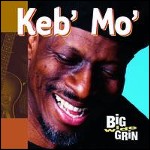 With the release of his new album ‘Big Wide Grin’, Andrián Pertout speaks to bluesman Keb’ Mo’ from Los Angeles about his brand of songwriting.

Singer-guitarist Keb' Mo' (born Kevin Moore) began playing the blues in his neighbourhood of Compton, South Central Los Angeles at the age of twelve, and initially as a guitar player, but later also adopting the trumpet, French horn, upright bass and steel drums. He has since established a celebrated career, with some of the early highlights including a 3-album stint in 1973 with Papa John Creach (Jefferson Starship’s violinist), and a later position with A&M records as staff writer – in 1980 becoming a solo artist with his debut release of ‘Rainmaker’. In the years that followed he went on to develop his blues sensitivities further by jamming with legendaries such Albert Collins, Big Joe Turner, Pee Wee Crayton and Jimmy Witherspoon, and in 1996, won his first Grammy with ‘Just Like You’ for Best Contemporary Blues Album, followed by another in 1998 with ‘Slow Down’. ‘Big Wide Grin’ represents his sixth solo album to date.

What does the blues represent for you, and where do you fit into the style?

KM: “It’s folk music; it comes from the earth; it comes out of the hearts and lives of the common folk. And I see myself as a singer/songwriter who really loves the blues, but I don’t try and fit in. I just do what do, and fall where I fall. It’s not a matter of trying to fit in. If I fit I fit, if I don’t I don’t.”

And what do you generally write about?

How do you actually go about writing songs? Do you have a proven method for a great song or do you prefer to reinvent yourself every time?

KM: “At this point I don’t really know how. I just keep doing the same thing I do in terms of my process, but keep working to say things that are honest to me. And the way that I record them, the way that I deliver them, is whichever way I am feeling at the time, or whichever way the spirit moves me to sing them. You know, sometimes they’re really popular; sometimes they’re not so popular. So you do your record, and reach who you reach.”

Do you have an actual routine, or is it more a matter of when you feel good about writing?

KM: “It’s a combination of feeling good about writing and also having an obligation to write. So I like it, but then you’re kind of tied up with obligations, so you have to find the balance between love and obligation. Kind of like a marriage (laughs). You know, how you make love and then commit. Finding the balance; it’s all about that.”

What is your latest album ‘Big Wide Grin’ essentially about?

KM: “Well, it’s a family record. It started out like a family orientated record. You know, children and family. And it’s a blues record, a fun project. And I wanted to produce music that says some things that are important – say like the songs ‘Love Train’, ‘Big Yellow Taxi’ and ‘Grandma’s Hands’ – songs that spread sentiments of family and tradition; wholesome things. But not so wholesome that it like makes you wanna puke! (laughs)”