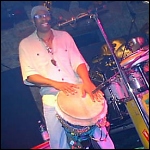 With their self-titled album out and an upcoming tour of Australia, Andrián Pertout speaks with Vinx from New York about the groove thang in Jungle Funk.

The Jungle Funk drums & bass, jazz-funk concept is the innovation of Vinx, in association with former Living Colour members Will Calhoun and Doug Wimbish.  Vinx began his performing career with blues artist Taj Mahal in the late 70s, and went on to forge working relationships with Sting, Herbie Hancock, Stevie Wonder, Zucherro, Branford Marsalis and Meshell Ndegeocello among many, acquiring the reputation as one of the most dynamic world beat-jazz vocalists/drummers.  As a solo artist he has produced four albums, with the last one titled Lips Stretched Out released through his own Internet label.  Will Calhoun on the other hand is the recipient of many drumming awards, including Rolling Stone and Modern Drummer nominations as one of the best drummers in the world, and has played for names such as Jaco Pastorius, Harry Belafonte, Wayne Shorter, Marcus Miller and B.B. King.  Doug Wimbish is the fretted crusader of the outfit, and in addition to his past Tackhead and Living Colour club membership has played bass for Carley Simon, Mick Jagger, Seal, Madonna, Depeche Mode and Ronnie Wood.

How do you reflect today on those yearly days as percussionist for Taj Mahal?

V: "The good thing about Taj is that it was my first professional gig, and when I did the gig I asked him, What do you want me to play?  And he said, I want you to play what you play.  I love what you do, thats why I have you here.  So if you play what you want, then it will sound exactly like what I want it to sound like. (Laughs)  But he gave me a kind of licence to be an artist, to play what I wanted to play, and he trusted me.  And Ive tried to carry that along with all the musicians that Ive ever worked with or hired, to say, Heres the song, youre an artist, do your art, give me your magic.  You know, you cant hire Aretha Franklin and ask her to sing like Barbra Streisand.  You have let the artist be the artist, and thats what I gained from Taj, because he wanted us to be ourselves, he really wanted that.

What was it like to be involved with Herbie Hancock on the Showtime Coast to Coast TV Special and on your later debut album Roomz in my Fathers House?

V: "Herbie is purely magic.  I played for his fiftieth birthday party, and he is absolutely a genius.  Hell play one chord thats so perfect that you just have to stop.  For him its that, its that one chord, because he aims to play the right thing at the right time, thats his quest.  At least on my projects anyway (chuckles).  And I really enjoyed Herbie, both as a man and as an artist.

Around about the same time you also developed the artistically influential relationship with Sting.  How would you describe this experience?

V: "His Royal Stingness, umm well, thats a difficult one, thats kind of a love hate relationship (laughs).  Unfortunately, that tour happened immediately after the death of my father.  I was struggling with that and also struggling with His Royal Stingness, the ego.  And to suddenly go to that type of stature, you know, where youre playing to sixty thousand people, and its just you and a drum, thats a special experience.  It was uncomfortable for me mostly because it was promised that my band would join, and it was never allowed to join me.  So I was forced to do solo, which in some ways was great for me because it allowed me to grow and get that confidence as a solo artist, but I really would have liked for people to get the whole picture, which at the time was about that first record.

You are generally described as one of the most dynamic world beat-jazz vocalists/drummers.  What do you personally consider to be the essence of your musical style?

And with regards to Vinx the songwriter.  Do you have a particular method that you generally employ in your songwriting?

V: "It depends, usually its based on an experience that Ive had in my lifetime, and basically, Im just doing a film score for one of my experiences.  And I know that sounds simple, but in fact its true.  I mean, when I think of my first kiss, I write the song, and I basically do a soundtrack or a film score to that experience that Ive had.  And as far as the melodies, its from everything Ive ever heard, my experiences, my fathers voice, every artist Ive ever listened to on the radio, as a child growing up, and even now.  Every country Ive ever visited, and every culture Ive experienced.

Tell me about that music that you grew up with

V: My aunt would listen to Motown, and my father would listen to Billy Eckstine and Nancy Wilson, the old balladeers, the old singers.  Instrumentally, a lot of Stan Getz, a lot of Lonnie Liston Smith, just everything that I could get my hands on.  I was like a sponge, just trying to absorb as much as I could.  Things I didnt even like I would listen to, to find out, Why is this on a record?  Whats the deal here, whats going on?  I mean, even if I didnt like Bruce Springsteen, at least I could appreciate his passion.  There was always something about everything that I could appreciate, and so for a long time I just listened to everything.  Its like a child learning how to read, you pick up every book that you can get you hands on, you get half way through something and decide you dont like it, but at least youre in there.

What were the circumstances that brought Will Calhoun, Doug Wimbish and Vinx together to create the Jungle Funk machine?

V: I was doing an interview in Holland after a jazz festival, and they asked me, Whats next for Vinx?  And I said, Well, you know, Ill probably go off with maybe Nana Vasconcelos and some drummer friends of mine, Will Calhoun, and maybe try to do some techno music with real drummers.  To play these fast rhythms, and actually try to use real musicians to play this music.  I dont think anybodys tried it because its so easy now to do it with computers.  And I was just speaking off the top of my head, and next thing I know is that promoters are calling my agent trying to book this project.  This acoustic jungle, this man-made techno.  We had maybe two weeks worth of dates in a period where people wanted us to play, but I hadnt put the band together yet (laughs).  I called Will, and we were waiting for Nana Vasconcelos to do it, but he couldnt.  And so Will said, Why dont we call Doug, and then we wont need a guitarist or anything.  Because Doug plays everything all the time, at once (chuckles).  So thats how Doug came in, and it became a project of three leaders, because in all their other projects they were sidemen, and for once they wanted to be in a situation where they would be called leaders.  And its been interesting and difficult, because by them being leaders, Ive now become a sideman for the first time since Ricky Lee Jones.  But the thing that is unique about this band is that there are three unique and individually special musicians, and the thing that makes it special is how they react to each other.  We do things that we normally wouldnt do, out of respect for each other, so its a situation that forces us to explore.  But it is a project, not a band, because we all have so many other projects going.

Tell me about Jungle Funks self-titled album.  How did the band approach the production of the music?

V: "We did it all live, and with a lot of it, theyve taken the audience out.  And of course we went into the studio and did some edits, and Doug added a couple of keyboard clean-up parts.  But I didnt re-sing anything, so my vocals were completely live.

And what was the role of technology on this album?

V: "We make our own loops, singing background parts, and creating on the spot, loops, textures and moods.  And Im endorsed by Lexicon and Syndrum, so I fortunately get to do a lot of the vocal looping with that system.  Im using a Wavedrum as well, in a mix with a big sampler.  Wills got so many sponsors with his drums, Sonor, the cymbal people, and he uses a Wavedrum and djembe at the front.  Hes also got Lexicons so that he can create loops, and were all linked together, so that we can share the same MIDI clock.  We can add to each others loops, so that as somebody starts something off, we can all add to it, and then play against it, create another person in the band, and then leave it.  So its an interactive situation, completely interactive actually.  And Doug of course uses all of his Trace Elliot and PC Electronics stuff, and every pedal known to man (chuckles).  Because hes not actually playing bass, hes really playing guitar with a bass (laughs).

Do you have a message to pass on to your Australian fans about your upcoming shows?