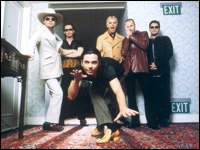 With the release of their new anthology The Years 1979  1997, Andrián Pertout speaks with bassist Garry Gary Beers about the latest from INXS.

If you consider the fact that in just over two decades INXS sold in excess of 30million albums, performed to audiences of over 100,000 people at the Rock in Rio concert and 75,000 at Londons Wembley Arena, as well as collecting 6 consecutive US Top Ten Singles, 6 consecutive Top Ten UK and US albums, 23 UK and 17 US chart hits, not to mention 38 Top 40 hit singles locally, there is no doubt that this is one of Australias most successful bands. Their career has also been celebrated with 7 American MTV Awards, 7 Grammy Award nominations, and in November 2000, further honoured with the bands induction into the ARIA Hall of Fame. Their new 41-track double CD anthology The Years 1979  1997 celebrates 25 years with a collection of classics and two previously unreleased tracks. Now, original members Kirk Pengilly, Garry Gary Beers, Tim Farriss, Andrew Farriss and Jon Farriss, together with singer Jon Stevens are scheduled for return performances in Latin America, followed up by an arena tour with Blondie in the UK.

INXS certainly delivered a colossal amount success for you all over the years. What would you now say have been some of your most memorable moments?

GB: I guess having such a huge selection of songs that strike memories for people, anytime of day or night. Thats always a good thing to have. Gosh, weve just released another greatest hits that still leaves out half the songs (laughs). Its just that therere so many bloody songs! And also the fact that weve played places that dont even exist anymore, let alone that not many other bands get to play in  Wembley Stadium, and multiple nights at Madison Square Garden was a pretty exciting thing to do in New York. We used to always call ourselves an international band from Australia, but we never really came home waving a flag about what we did overseas  because of the old tall poppy syndrome  but at the end of the day we built a following overseas that people in Australia only just now, funny enough, are starting to realize how big we were. For a while we were the biggest band in the world! But we just came home and disappeared into our little hiding holes to recuperate and make new records.

Tell me about The Years 1979  1997; the 41-track compilation double CD that is scheduled for release this month. How did it come about?

GB: It was released this week, and debuted at number nine in Australia. And I guess we were due for a new compilation, because our last compilation The Greatest Hits was out eight or nine years ago. And a fair bit of water under the bridge since then. We also had some unreleased tracks that we thought needed a home, so low and behold the time seemed to be right. Especially with Australia, and us winning the Lifetime Achievement award and the ARIAs. And I think perceptions of INXS have turned around to were a pretty credible part of Australias music history. It took us a while to get over the band with the deadly singer bullshit. You know, the press can be pretty cruel, and basically we found that a lot of people just take it for granted that you are what they read about, which is not the case. Were a band with a great musical legacy. And thats what I think has finally got us through. The songs are still there, and the band played a few shows overseas, toured America this year, and it went off!

Especially in view of the fact that recording technology has developed so much since the first recordings, did any of the original recordings undergo any significant digital processing, production or re-recording?

GB: No, no re-recording. Obviously the unreleased songs are new recordings, and because it was unreleased stuff with Michaels voice we went in and did some bits and piece on that, because it was unfinished. The old stuff we had remastered by Don Bartley in Sydney, and spent painstaking hours going through our tape vaults, which we needed to do anyway, because the stuff has a shelf life, and needed transferring to different mediums for storage. Because we want to hang on to all our masters for obvious reasons. But we picked the songs and remastered them, so that they all sound a bit more sparkly.

You didnt do any remixing?

GB: No, most of it was mixed by Bob Clearmountain, and various super mixers of the times, and so they still sound pretty fresh. They dont sound tragically locked in the eighties or tragically locked in the nineties. They sound pretty good. So there are a few remixes of the bonus song Tight weve got floating around. But the one thats on the double CD is basically the mix that we had when we left the studio by Mark Opitz, who helped assemble the unreleased stuff.

How has INXS reinvented itself following Michael Hutchences tragic death? Where is the INXSs new music heading?

GB: I guess well see. I guess well all have that happy journey together. The songs that weve been writing sound awesome, and Jon Stevens is a permanent member now and fitting in really well. And also its a different thing in many ways, because were all based in Australia. And were all a phone call or a jump-in-the-car away. Before it was conference calls to Paris, and blah, blah blah. Things can get bigger than Ben Hur, and in the end, quite often the music suffers. Were really enjoying it, its not like starting again, but it is a lot fresher the way were doing it, and a lot more organic. So were enjoying our music more than ever. And all the worlds experts were telling us to break up when Michael died, but well happily stick it up their noses, because now the bands still one of the best live bands in the world. And John Stevens, besides being a good mate, is an awesome front man and a great singer. And Americans had never heard of him before, but when we went over there they were like, My God, whos this guy! And its all guns blazing at the moment, its feeling really good.

What are the bands plans for the near future?

GB: At them moment as I said, were writing. Next week were doing some recording, just to see how it all sits together, and in the lure of starting a new album early next year. And weve got no record deal. Were all free and easy at the moment, so basically the worlds our oyster in many ways. Its great, and the timings pretty good because the new anthologys out, which I think debuted at number 15 in the UK! So we feel pretty good about the timing, and I think that the new music by INXS will be really well received  we hope  and if doesnt, thats fine too. Were just happy to be doing what we do.

GB: In June this year we toured South and North America. We went to Ecuador, Peru, Argentina, Brazil and El Salvador, but this time were going to Mexico City and the Dominican Republic. And the interesting thing is that imagine how poor South America is, but theyre the wildest crowds, because theyve spent their hard earned money and theyre going to have a good time. And they sing to everything, they just go crazy. You know, they might die tomorrow in their minds, so they just go nuts. In the USA, its a bit more work, but as soon as you walk out in South America its mayhem. And thats the beauty of it. Weve had quite a few hits in South America, and we were one of the first bands to tour those places in over a year. Lots of bands say theyre coming and never do, but the people always get burnt, and promoters always lose their money. And these people are so dirt poor that theyre not going to spend their money until the band turns up. Like in Argentina, we turned up, did some press conferences, and got about twelve thousand people! So theyre obviously screaming for us to come back. And were going back to do some warm up shows on the way to the UK.

And youre touring with Blondie there!

GB: Yeah, but theres a bit of a connection there. Debbie Harry played with us when we sold out Wembley Stadium years ago, so there is a connection. And Blondie are a great band, theyve got some good songs, and came back a similar way. Theyve made a big comeback album thats number one at the moment in the UK. It seems like an odd pairing, but its pretty cool