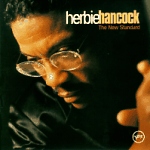 Andrián Pertout speaks with Herbie Hancock from New York about his legendary career, his new album 'The New Standard', and the upcoming tour of Australia.

The innovation and artistry of Herbie Hancock's music has been an evident force for over three decades now, and at fifty-six, there are no signs of a meltdown. 'The New Standard' presents us with an interesting blue-print for the 90s 'Real Book', with compelling interpretations of contemporary pop and jazz pieces. A selection that includes compositions by Don Henley, Peter Gabriel, Lennon & McCartney, Babyface, Stevie Wonder, Sade, Simon & Garfunkle, Prince, Kurt Cobain and Donald Fagen. The album features saxophonist Michael Brecker and guitarist John Scofield, with the participation of bassist Dave Holland, drummer Jack De Johnette and percussionist Don Alias. Herbie Hancock is a true visionary, and will continue to influence and inspire generations of musicians. In recent times, jazz has come full circle back to its traditional forms, and this album is about a return to these roots, and to his first love, the acoustic piano.

HH: "Actually, well let's see, there are two different periods that I could..."

I guess I mean, in your early years, what did you grow up listening to?

HH: "You mean, what got me actually playing the piano in the very first place?"

HH: "OK. My best friend had a piano, and I would go up to his house and play on his piano every day. Once he got that piano in there, I started ignoring him, and (chuckles) I couldn't play, but I would ask him, 'What did your teacher teach you today?' And he'd try to show me something, and I'd try it, you know. But I couldn't wait to get up to his house to play on his piano. So my parents, particularly my mother, she noticed that I seemed to be interested, so on my seventh birthday my parents got me a piano. It wasn't any particular music that did it, it was just that my best friend had this piano."

What are some of the special memories you have today of your collaboration with Miles Davis in the sixties?

HH: "Ummm, of course there are a lot of things. One of my finest memories... First of all, Miles was a genius, a real master, and I'll give you an example of that. Miles never really told us specifically what to play, he would never tell the drummer to play this figure, or play that figure. He would use some kind of symbolism of that, he would relate something that would have nothing to do with music to something that he may have felt in his head. But by doing that, each musician always had to come up with the answer himself. So in other words, we were constantly challenged to grow, and that's what a master does. And something else, Miles had this way of playing that even though the guys in his group were younger than he. You know, back then it seemed like he was a lot older than we were (laughs). But he wasn't that much older, he was maybe, I guess he was in his thirties, and I was in my twenties. But when you're in your twenties, thirty seems a lot older. I don't know how old you are?"

HH: "Right! Well, you remember how it was when you were like twenty-three, right? So anyway, so Ronald Carter and Tony Williams and I, we were like the young rhythm section. Tony was seventeen, Ron was a couple of years older than me. So we would always be cooking up these themes, because we were always listening to a lot of contemporary classical music, and we were listening to people like John Coltrane and Ornette Coleman and Sonny Rollins. We were listening to a lot of different people, but we were listening to a lot of real innovators, and we were full of ideas. But once Miles would start to play on top of these things we were doing, all of a sudden, it was as though he would go to the core of it. Even though there were three elements, he would go to the core that ties the three elements together, you know. And somehow you'd get a sense that, 'Oh, now I know what it is we're doing', just by hearing Miles play, he wouldn't even have to say anything. And it seemed to be automatic, he just naturally responded to what he heard that way, just automatically organized.

"And I remember specifically when we played a concert, I think at Stutt Gart. And this was one day when the band was particularly hot, and we were playing... I've forgotten which tune it was now, but the band was really burning. And Tony Williams was really cooking up a storm, and Miles was playing, and it was just, everything was really happening. All of a sudden, during like a peak of Miles's solo, I played this chord that was so wrong that I felt like crawling under the floorboards (laughs). It just sounded horrible, it was a chord I played way too early, and it just didn't fit at all. Miles paused for a fraction of a second, at a breath, and he played some notes. He found some notes that made my chord right, and it blew my mind so badly that I couldn't play for about a minute and a half (laughs). I just stood there with my mouth open, I couldn't believe what I heard. It was amazing, and I've never forgotten that."

Fantastic! The period in the seventies...

HH: "Oh, you know what I wanna say? You know what I believe really happened? I believe that Miles just heard it as an accent, he didn't hear it as a mistake. You know, and as a musician of that calibre, his job was to take whatever happens, and make music out of it, and he had the ability to do that. Anyway, I'm sorry, so what was your question?"

I've been given fifteen minutes so...

What sort of impact did your conversion to Nichiren Shoshu Buddhism have on your music? Do you still follow the philosophy and its principles today?

HH: "Oh yeah, I'm still practicing Buddhism, 'Nam-myoho-renge-kyo', you know. We're not called Nichiren Shoshu anymore, actually we've had a split, and the priest had that name, Nichiren Shoshu. But I joined through an organization called Soka Gakkai, but we practice the same Buddhism. Anyway, yes I'm still with it because it works (laughs), and it definitely changed my life. It changed my music? Well, in the sense that if my life changes, I would think that my music would change. I feel a lot more secure about the directions I take, than I might have, had I not practiced Buddhism. I mean, that's one thing among many."

But it was Future Shock's 'Rockit' that brought your music to the mainstream in the 80s, winning you five MTV Video Music awards. I'm sure that some of the purists would not have approved. How do you see this exciting period in pop music?

HH: "Ahh, with Future Shock? Ummm, some critics didn't approve. But to me it was just another one of the directions that I wanted to explore. My next interview is actually on hold, on the other line, so I'm gonna have to go."

The second part of this interview was published in Mixdown Monthly issue #36, April 1997. In this article he discussed his association with Mongo Santamaria in the 60s, the period in the 70s with Headhunters, as well as his film scoring career.