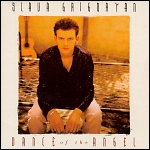 Dance of the Angel

Andrián Pertout speaks with guitar virtuoso Slava Grigoryan about his beginnings and his new album 'Dance of the Angel'.

Slava Grigoryan was born in Khazakstan, Central Asia, with an Armenian lineage, and soon after his arrival to Australia in 1982 began to study the classical guitar under the guidance of his father Eduard. A period of development followed, and the establishment of the family trio, as well as his association with various prominent Melbourne ensembles was to be his musical catechism, as it prepared him early for a successful musical career. At just fifteen Slava was already a virtuosic performer, and this was manifested at the 35th Tokyo International Guitar Competition, where he became the youngest finalist in the history of the award. His Sony debut release 'Spirit of Spain' featuring the music of Albeniz, Torroba, Mudarra and Chick Corea presented him as a solo performer to the world, and was duly received with much critical acclaim. Two years later Slava's supporting role on 'The Great Guitars' tour was elevated to centre stage, when he was asked to play alongside Paco Peña and Leo Kottke, as a consequence of legendary guitarist Pepe Romero's sudden pull out from the tour. On his follow-up album, 'Dance of the Angel', Slava Grigoryan invites the listener to experience the rhythm and passion of Argentinean tango and Brazilian bossa nova, with works by Dyens, Lovelady, Piazzolla, Baden-Powell, De Moraes, Santorsola, as well as Eduard Grigoryan's 'Homage á Jobim'.

Tell me about your early introduction to the guitar.

SG: "Both my parents were musicians, and although they studied as violinists classically, they played all styles of music, they branched out into jazz and fusion. When I was seven my father gave me a guitar and started to teach me, and that was basically it. I can remember when I was younger than that always being surrounded by music, 'cause they were always practising and playing, there were always musicians in the house, but yeah, at the age of seven I actually started learning. And I think over the next five years, obviously I was just coming to grips with the technical side of playing, and started playing publicly at about twelve or thirteen."

What kinds of musical styles were you exposed to during these elementary stages of your career? Did any particular artists make a lasting impression on you?

SG: "A lot of them did, I find it really hard to narrow it down to say one or even two people. Especially with me, because I didn't follow just one path of music, I had all these different influences. My father was a jazz-rock drummer for many years, you know, one day I'd be listening to Beethoven symphonies, and the next day it'd be Chick Corea and Return to Forever or Miles Davis, all the avant-garde stuff, Jimmi Hendrix, a lot of rock, a lot of everything really. So influence wise there's so many different people, obviously all the great classical guitarists were big influences for me, Segovia, John Williams and Julian Bream. I'm a big fan of Paco de Lucia, in fact if for some reason I ever had to single one of the guitarists out of everyone, in any style, I'd probably have to say he's my guy. But guys like Hendrix, Miles Davis and Chick Corea were always big influences, and still are."

Born in Khazakstan to Armenian parents, you then emigrated to Australia in 1982. Do you perceive your cultural background as having been influential to your music?

SG: "Not really, I think only maybe the fact that my parents went through the Russian school of music, and then passed it on to me. That's probably the only Russian thing that influenced my music. As far as I can remember I've always been Australian, so I don't really remember anything before the age of four, which is when I left. My parents were very young when we moved as well, and although we've always kept up Russian, we speak Russian, it was a very western upbringing, in the sense that we always listened to western music."

At 18 you performed with Paco Peña and Leo Kottkee as part of 'The Great Guitars' Australian tour. How would you describe the experience of playing alongside these masters of the guitar?

SG: "To me it stands out as a really important event in my life, because that was the first time that literary overnight, well, in the space of a few months, all of a sudden I was playing alongside these guys, on big tours, in big halls. And so for me that was my first taste for big gigs and that sort of exposure. Yeah, it was incredible, it's always gonna be a big memory for me."

In my last interview with Tommy Emmanuel, he described your guest appearance on his 'Classical Gas' album as being that of a 'real classical guitar player'. What is the essence of classical guitar technique?

Tell about your new album 'Dance of the Angel'. What was the inspiration behind the choice of Argentinean tango and Brazilian bossa nova as the underlining theme?

SG: "Well, the first record was Spanish music, and when we were thinking of what I should do next, it's an obvious follow up, you know, go to South America. For me as well, because jazz was always such a big influence, South American music has that wonderful mix of both classical, folk and jazz. And in a way, I think I could happily keep on playing South American music all the time, and have all these three sides satisfied, and feel satisfied with just this one music. It's not something I will do, because I wanna do other things as well, but that was the inspiration behind it. And the reason why I did the tangos and the bossa novas was that although they're very different, they thrived around about the same time in their separate countries, and I think they had the same social impact on the cultures. Tango is not just a dance or a form of music in Argentina, it's an institution, and bossa nova in Brazil, the saudade is the same thing, it's a way of life more than anything else. Although they're very different, they're also parallel, and I think they compliment each other musically really well on the one record."

Astor Piazzolla's 'Histoire du Tango' features your father Eduard Grigoryan on violin. Do you team up often and explore musical ideas or is this a rare event?

SG: "I've done a lot of playing with him naturally over the years, from thirteen through to sixteen I played with him all the time in the trio that we had with mum and dad, and myself. And because you get to know a person personally so well, and apart from being my father he was my teacher as well, we communicate really well in the music, and obviously it's a special thing to be able to record with your father. In a way it's a one off situation, but it will always be there, it will be a really good memory."

What sort of approach do you have in the studio? Is there a search for that perfect performance take after take or is spontaneity more important to you?

SG: "I love being spontaneous, if for example I'm playing a piece over and over, say if it doesn't work in five takes, I just put it away and do something else, because you lose the feel, the energy. And the way I record is totally different to say a big rock production, or even classical music. In this day and age the technology that's used in recording has really effected the standard of playing, and usually artists, including classical artists don't think twice about editing. You know, if they fluff a note, they just play that note somewhere else and just chuck it in later on, and computers are so amazing that you can do that without hearing it. And I don't like doing that at all, and I've never done it to that degree. What happens is say if I do three takes of the same piece, and you know, most pieces have their distinct sections, if for example I'm not happy with one section, or I think in an other take that section was better, I might put that section in. But I never actually fix mistakes or patch things up, because it becomes cold and it loses the essence of what music is really about. I think personally, live playing is what it's all about. You know, you go to a gig, you wanna see someone doing it, there and then. And even though I love big productions, especially rock music, the Beatles spending eight months on Sgt Pepper's and getting something which is incredible, or Pink Floyd's productions and things like that, it's just a different way of looking at it, and so far I haven't used that way."

How long do you actually spend on an album?

SG: "Usually, I go in for a say a week and get a CD done, I don't spend more time than that. The first two days I spend just getting the sound right, I don't actually do any playing, any recording. In fact that's probably the most tedious part, where you've got six or seven microphones to mike one guitar up, all over the room, and just getting the right mix between every mike. On a project like this or say my last work where I'm playing the whole thing by myself, just a solo thing, I wouldn't spend more than a week doing it."

Later this year you commence a US tour which will include your debut at New York's ultimate gig, Carnegie Hall. How did that come about?

SG: "Basically, I have a management company that are busy organizing tours and concerts for me now, and this is one of the concerts that they put together for the US tour, which is very exciting, I'm really looking forward to it. In October, they'll be releasing this album in the States as well, and because I haven't been there for an official tour before, they haven't really had the chance to promote my last record, so on the whole tour I'll be playing a mixture of the two CDs and promoting both of them at the same time."

How is the jazz-rock album that you've previously talked about going?

SG: "Really, it's sort of taken a twist in the sense that the next record that I want to do, I want it to be something really different, for me anyway. I don't think it will be a classical record as such. Well, I know it won't be a classical record, because I'm currently writing a lot of music and playing with a bass player from Vienna, who's out here at the moment, and will be doing this Australian tour with me as well. And we're writing a lot of this music together, and hopefully quite soon we're gonna start going into the studio and doing separate tracks of mostly our original compositions with other musicians, drummers and possibly singers as well. Yeah, something totally different, and it's not to say that I'm taking a different direction, it is a different direction, but I'm never gonna leave the classical side as well. The album after that, which I'm planning as well, will be a serious classical record, and I suppose in a way that means I'm gonna try and balance out the two different sides without mixing them together, keeping them separately."