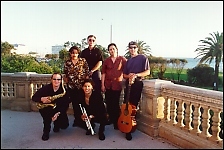 Gustavo Alfonso Garcés is an Argentinian born multi-instrumentalist/composer, and began his musical career in Buenos Aires at the age of twelve, playing the trumpet as a cadet in the airforce.  His instinctive love for rhythm had earlier also introduced him to the fiery percussive sound of the bombo, but in the years that followed his Spanish lineage allured him towards the more impassioned idiom of the classical guitar.  In 1975, Gustavo immigrated to Australia with his family, and soon thereafter initiated formal classical guitar studies, which ultimately led to the endowedment of degrees from both the Latrobe and Monash Universities.  In 1991, he established his artistic voice Mumbo Jumbo, playing mostly original material with Latino roots, a style emalgamating rumba, cha cha cha, mambo, salsa, merengue, samba, bossa nova, lambada and soca with contemporary philosophies.  Since its inception, the band has consummated a list of celebrated national performances, and consequently attained a loyal following.  The artistry of progress has in recent times introduced a considerable number of metamorphises for Mumbo Jumbo, and the current lineup features Gustavo Alfonso Garcés on vocals and acoustic guitar; and includes Carmela DAgostino on vocals and percussion; Fabian Navarro on keyboards and vocals; Mark Sylvio on trumpet and pocket trumpet; Adrian Mc Phee on tenor saxophone; Steve Barboza on bass and vocals; and Manuel Perez on drums.  Their debut album is titled Carnaval, and is an illuminated collection of compositions showcasing the talents of Gustavo Alfonso Garcés.

GAG: I got into this wonderful world of music at a very early age, I started when I was eleven.  And actually, my very, very first instrument was a percussive instrument, the bombo, and that led to the classical or Spanish guitar as we call it.  So I started performing in Argentina, where I was born, and when we immigrated to Australia I developed the classical guitar technique.  And I have always been attracted to this instrument, I have always liked the sound of the guitar.  Most Latin American people grow up in a musical environment, and I was exposed to that, there was always music around.  And the instrument that most inspired me was the Spanish guitar, so it became my main instrument.

GAG: Musicians, oh there were a lot of them, a lot of them!  I remember when I was a kid I used to be attracted to very folkloric bands, such as Los Fronterizos and Los Chalchareros.  And in my teenage years I was inspired by what we call contemporary music of Argentina or rock contemporary, by a guy named Papo Blues, a blues guitarist.  So Ive had an enormous influence from lot of artists during my musical career, but not one in particular.  However, when youre young you always pick a particular artist that you listen to over and over again, like Jimi Hendrix or George Benson, but I never had one particular star that inspired me all the way through.  I have a very broad mind, and listen to a wide variety of music.

In the eighties you undertook contemporary classical music studies.  How did this experience influence your general perception of music and the Latino style that you currently perform?

What is the essence of Latin American dance music?

GAG: For me, its rhythm.  My concept of Latin American music is the essence of rhythm, and a solid foundation of rhythm, a solid rhythm section.  So that when you hear the congas, cowbells or drums it makes your feet move, and you say, OK, Im getting into it!  Its being able to express happiness through a song.  And when you do get on the dance floor, being able to say, Yes, Im having a good time, and you can forget about the past.  This is the way I look at Latin American music, but I try not just to write, Baby, baby, I love you, but to tell a story in my lyrics, and get a message across.  And specially here, in a foreign country, what people really like about Latin American music is that they can express their happiness through music.

How do you personally structure and perform your compositions in Mumbo Jumbo?

GAG: Structure was a very difficult task, because Latin American music has elements that form certain structures.  Well, I have broken some of these rules, and sometimes I do change the concept of the clave, I change from 3/2 clave to 2/3 within the same song.  I mostly use the rumba clave (3/2), and also use rock elements.  Sometimes I put a vocal chorus first, and then a verse, which breaks some of the traditional rules.  But I believe in modernism, so I like to modernize the song.

Tell me about your debut album Carnaval.  What was your approach to the recording of the music in the studio?

GAG: It took us twelve months to record, and every single instrument was recorded live.  I took my time with the CD, and did quite a few takes for some songs, later picking the best one, whereas on others I put everything down and tried to elaborate from there.  And because Mumbo Jumbo is a dance band, I was searching for the commercial rhythmic aspects, so that people can say, Alright, we can dance to it, rather than just being a very musical, listening CD.

Composition being one of your main vocations, I hear that as well as writing songs for the band you have been reworking the Misa Criolla concept.  How did the idea of La Misa Gaucha initially come about?

GAG: I composed what I call the new Misa Criolla, or as I renamed it, La Misa Gaucha.  The structure of this musical play is actually a mass, performed by a full choir and a traditional folkloric band, using traditional instruments such as charango, bombo, guitarra, quena and zampoña.  And I got the idea from my early days at university, when I was in the choir doing the Kyries and the Glorias, and experiencing the choral sound.  The music is put together with the very folkloric sound of the Andes, and what we call in Argentina, la zamba.  So theres several styles that Im presenting, such as zamba, chacarera, carnavalito, waltz, nueva canción and balada, with a very traditional choral sound.  Im planning to put this on stage at the end of the year, around Christmas, when people feel a little bit religious and can relate to this musical play.

GAG: Lots!  Ive got a book full of ideas.  Well, Mumbo Jumbo over the years has been growing with different instruments, different musicians, and I believe that every musician should try new things all the time.  So I would like to expand my brass section from two to five-piece, I would like to experiment with electronics, and Im considering releasing another CD with a new face of Mumbo Jumbo.  I would like to go overseas and expose Mumbo Jumbo to the world.  At the moment Im aiming at Asian countries, so that we can expose our style of Latin American music. I think every single musician should experiment and expand. And you have to let people know that you are there, outside your own community, and to other places, not only Australia but all over the world.

Carnaval distributed by Newmarket Music.  For further information contact Gustavo Alfonso Garcés on (0412) 553 280, or Newmarket Music on (03) 9372 2722.  I would like to thank Viccas for producing the caricature.