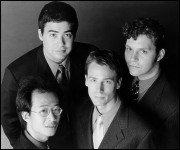 The New Faces of New Music

At the onset of their Australian debut, Andrián Pertout speaks to Tom Chiu from New York about the magic sounds of the FLUX Quartet.

New York based FLUX Quartet was born in 1995, and out a musical friendship created at the famed Juilliard School of Music by violinists Tom Chiu and Cornelius Dufallo, violist Kenji Bunch and cellist Darrett Adkins.  The Fluxus movement of the sixties, which may be described as more or less artistic style in perpetual motion inspired the name and also set the precedence for the direction of the groups music.  The quartet is today renown for their innovative performances of new music from around the world, and possess a general repertoire consisting of works by John Zorn, Györgi Ligeti, Béla Bartók, Jerome Kern, Philip Glass, Ornette Coleman and even contributions by FLUX member Tom Chiu.  They have performed at some of the most notable events in New York City, which include the Chamber Music Society of Lincoln Centres Beethovens Festival, Juilliards FOCUS! Festival of New Music, the Museum of Modern Arts Summergarden and the Knitting Factorys Composers Series.  In the past, FLUX has also been responsible for premiering new music by Lukas Foss, Renaud Gagneux, Johnny Reinhard, Roger Reynolds and Alejandro Iglesia Rossi.  Other musical adventures highlight collaborations with The Who, Alice Cooper, DJ Spooky and Ornette Coleman.

How did the FLUX Quartet initially come together?

TC: We all met at school, at Juilliard, and this is back in 1996.  And at school you play with a lot of different people, but we really clicked, because we all shared this common interest in all these different types of music, particularly like breaking the boundaries between musical styles.  We started playing together, and I came up with the name FLUX.  And it really is suggestive of a few things, and one thing from the arts perspective is a little bit alluding to the Fluxus movement.  This was a New York movement in the 60s, and perhaps the most famous person from that period is Nam-June Paik.  He was an artist who worked a lot with television sets, and his most intimate thing is his collaboration with nude female cellists.  But anyway, its the spirit of the movement and the group.  They were very influenced by the Dada, and by people like Marcel Duchamp and John Cage.  And I think among other things, there was a spirit of like everybody can do art, everything is art, so a real breakdown of the definition of art.  And then within it, theres one person, a German artist, Joseph Beuys, who works with a lot of different types of media, he works with chemicals or other things that obviously even when the work is done, its still constantly transforming, its based on the physical and chemical state of the room.  So its this idea that a piece of art is always transforming, its never staying the same.  Im definitely very influenced by that, and there are a lot of present day artists that have been tagged 'Fluxus influenced artists.  And the other thing that goes along with the name and the movement is this idea that things are always in motion, and that both music and musical styles are always changing.

What is the principal focus of the repertoire?

TC: Thats a big question (laughs).  Its mostly modern, contemporary.  And we play through all the pieces that we get, and then we take what we like.  We usually pick things with extreme commitment to a specific vision.  For instance, one of the pieces that were playing is a piece by a French composer, Renaud Gagneux, and its a four movement piece of which the first movement is like five minutes of constant, dense, fast notes.  And it just feels like this wall of sounds, and it never stops, its really intense.  And the opposite, extreme of this is what were doing in the concert for the Sunset Series, were doing like excerpts from a quartet by an American, Morton Feldman, and that quartet in its entirety, which were doing on October ninth in New York city, before we come to Australia, which by the way will be a New York premiere; but for that quartet, his second quartet, he notes the duration in his score as being from three and a half to five and a half hours (chuckles).  And I think our calculation is closer to about seven hours (laughs).  Anyhow, so theyre the two extremes, extreme hyper activity and then this extreme slow and quiet beauty for a very long time (laughs).  It takes a lot stamina and concentration.  And Feldman is like the pioneering American minimalist, but he comes more from the Anton Webern stream, hes not the repetitive, motoric, like ala Glass or Reich, hes like more from the John Cage tradition I guess, minimal material, minimal everything.  But the harmonies are incredible.

How does new music reach you?  Do composers personally submit their music, or do you discover contemporary works through other avenues?

TC: A little bit of both, and being in New York, were obviously fortunate to be around a lot of very interesting and active composers.  So were in the middle of a lot of different things, but I personally seek out a lot of music.  I always tell people, Im not just a player, Im not just in the business, Im also outside the business, (chuckles) because I really am, I look at myself as a fan.  I listen to radio as much as I spend time on my instrument, and a lot of people, if theyre in the profession, they dont want to do any more on it (laughs).  But Im both a player and a record collector, so in that way I feel like Im saturated (chuckles).

Are there particular techniques that you specialize in as individual performers?  What are some of the special effects that you output in the stringed department?

TC: Special techniques, oh definitely, I love the fact that youre asking about special techniques, because I think were always trying to push what our instruments are capable of doing.  I think one thing we explore with is a judicious use of creating noise on our instrument.  And when we do the piece by John Zorn, there is a lot of that.  And sometimes we do our own originals, I do originals myself, and we also do a lot of that.  But one technique that we use is this circular bow technique.  Its a scratching that almost sounds like a DJ scratching records, but that is a little bit of a pseudo rhythm section, a little Beastie Boys taste (chuckles).  Another thing I do a lot is the use of harmonics, and also the use of alternate tunings, so a lot of those things.  The harmonics particularly create a totally different sound world.  But were always trying to explore what we still havent done.

The Who, Alice Cooper, DJ Spooky, Ornette Coleman and Tom Hanks seems quite an odd selection of previous employers.  How do you generally collaborate with artists outside of the classical scene?

TC: (Laughs) Lets see, you mentioned Alice Cooper, The Who, DJ Spooky, Tom Hanks.  OK, firstly, yes, a lot of that is extremely random (laughs), but I think thats a given of the type of career that we individually, and we as a group are exploring.  We never really know where the careers going to go.  But I think we should throw away Tom Hanks (laughs), because that was actually myself, I was in a film with him when I was a little boy, so that is definitely an isolated incident.  It was called The Man with One Red Shoe, but I believe all the others are musical, right?  And yeah, some of them are a little random, we dont always collaborate with Alice Cooper (chuckles), but other people, like for instance Ornette and DJ Spooky, I think those are the sort of the people that we can speak of having some kind of shared language.  Its all different things, Ornette in his free jazz world and DJ Spooky in his electronica world, and we in our own.  And were definitely on the fringe of string quartets and other things.  I mean, we are playing a piece by Ornette, but I believe that the fringes of all different musical styles find a shared common ground, where the different creators can appreciate the similar creators from a different perspective, but theres this shared idea of exploring and experimenting.  And I believe that the older idea of the avant-garde is based on that, its not so much whether youre a musician, a visual artist, a filmmaker or a writer, its about exploring something new.  And the creative process, whether its sonic, visual or literary, its all the same creative process.  So you can throw out the Tom Hanks and Alice Cooper, those are just money gigs (laughs).  Sometimes we need to make a living, and thats a good thing for you to write, We do modern music, but we still need to make a living. (laughs)

What do audiences experience at your concerts?

TC: I think something extremely energetic, something extremely free. We love an open-minded, uninhibited audience, because thats how we approach music.  We hate, there I use the word hate (chuckles), but we hate the stodgy classical style of like obeying everything on the page.  And Im not arguing against a faithful performance of Beethovens Great Fugue, but what I am saying is, if we, through our musical explorations find something really neat or cool about a different way of doing it, then were going to do it, as long as there is a musical vision and purpose behind it.