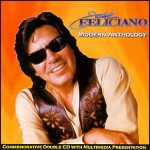 The Making of a Legend

At the onset of his Australian tour, Andrián Pertout speaks with legendary Puerto Rican artist José Feliciano from New York about the evolution of his celebrated career.

José Feliciano was born sightless as a consequence of congenital glaucoma, and it was following his move to New York City in the early fifties, away from his birthplace of Lares, Puerto Rico, that he was musically initiated.  He began by playing the concertina, and three years on, at the tender age of nine, adopted the guitar, being the instrument that would in time make him a household name.  By the age of twenty-three he had accumulated two Grammy awards, five Grammy nominations, recorded in four languages and performed in most of the world.  Although José had already achieved major stardom in Latin America by 1966, US chart success eluded him until the 68 delivery of The Doors classic Latin soul rendition of Light My Fire, which was followed up with hits US National Anthem Star Spangled Banner, Feliz Navidad and Chico and the Man, to name a few.  José Feliciano is today considered the first Latin artist to crossover into the English music market, and has released over sixty-five albums, which has endowed him with over forty-five gold and platinum albums, six Grammy awards and sixteen Grammy nominations.  His hand imprints adorn the Wall of Fame in Madame Tussauds in London, while a star at the Hollywood Walk of Fame stands as a testament of his global appeal and celebrated artistry.  He has further been acknowledged as Guitar Player Magazines Best Pop Guitarist for five consecutive years, placing him in their Gallery of Greats, and was befitted with Billboard Magazines Lifetime Achievement award El Premio Billboard in 1996.  José Feliciano has also performed with the London Symphony, the Los Angeles Philharmonic and the Vienna Symphony, as well as (as the official web site fittingly words) for and with some of the most important people on the planet, with a recent highlight being an appearance alongside Carlos Santana in the November, 1999 CBS Television Special Ricky Martin Live.

It is said that your musical initiation began with a tin cracker can at the age of three in Puerto Rico, later developing into an interest for the concertina, and ultimately the acoustic guitar and the voice.  What are some of your favourite memories about these humble beginnings?

JF: I think some of my favourite memories are with my family, with my parents.  You know, I really didnt get too many feelings from Puerto Rico in the beginning, because I left there very early.  So I really grew up in New York City, and that was very interesting, because I grew up during the rock n roll era.  And I played the concertina when I was about seven years old, and played that till I was in my early teens, but the guitar was really what I was interested in.  When I was nine years old I started playing the guitar.  But really, what I remember is that I was always into music, music was the thing that I always enjoyed and I think thats what got me into it.

After hearing one of your early performances in Detroit, a critic characterized you as a ten-fingered wizard who romps, runs, rolls, picks and reverberates his six strings in an incomparable fashion.  How did you initially develop your guitar technique and overall musicianship (on account that you do happen to be blind)?

JF: I dont think being blind has got anything to do with those kinds of things.  You know, if I was an athlete maybe, but I think in music you develop these things if you like music.  And this critic wasnt really in Detroit, it was in New York City, his name was Robert Shelton, and used to write for the New York Times.  But playing just came to me, not right away of course, but I think by listening to other guitar players, like Django Reinhardt and Segovia, those are the people that to me

Thats quite a mix

JF: Oh yeah, well I like classical guitar, but I also like jazz and I used to like rock n roll.  And I used to play rock n roll on the acoustic guitar, because I was too poor to afford an electric.

And how did you actually develop your technique?  Was this done by listening to records?

JF: Yeah, it was by listening to records, and just playing and practising, every day.

You must have practised a lot!

JF: I did, I used to practice fourteen hours a day!

Music has so far endowed you with six Grammy awards, forty-five Gold and Platinum albums, a private audience with Pope John Paul II at the Vatican in Rome, as well as a Christmas reception with the Clintons at the Whitehouse.  Could you ever have imagined this type of result in the early days of your career?

JF: No, when I look back and see how far its come, its amazing to me.  You know, because to come from the hills of Puerto Rico where I came from, and to then live in New York, I knew that I would be a good musician, but I never thought that I would be a famous musician.

What were your aspirations at the time?

JF: At the time, before I became famous, I wanted to be the best musician that I could be, thats what I wanted to do.  And like I said, I never thought that I would be famous or anything like that, I just enjoyed the music.

The first major break for you was in the sixties, and as a result of an appearance at the Mar del Plata Festival in Argentina, which later culminated in your success all over South and Central America, Mexico and the Caribbean.  What was the music that you were performing in those days?

JF: Well, I was doing romantic ballads, I was doing what they call bolero, and you being from Chile, you know what that is.  And so that is what I used to do, I used to do romantic songs in 1966 and 67, and then of course, later, when Light My Fire came out in 68, I tried to follow a similar formula, and Light My Fire kind of lent itself a little bit to that feeling.

What was the scene like in those days in South America?

JF: Well for me, the scene was a frantic scene.  I mean, it was like Beatlemania for me, the girls were screaming, and I couldnt go anywhere in Argentina, Chile and Venezuela.  So you know, it was pretty hectic during that time period.  And in South America I sang in Spanish, but in the United States I always sang in English.

With the release of the Doors Light My Fire you entered the US market, consequentially attaining global pop status.  How were those great arrangements of that period realized?  I would go as far as calling them the rewritten versions of Light My Fire, California Dreamin, Sunny and Theres Always Something There to Remind Me.

JF: The arrangements, the strings and that stuff were done by a fellow named George Tipton, and he kind of did the string arrangements, but the basic arrangements were done by me and a bass player by the name of Ray Brown.  And so we did the arrangements for those kinds of things, High Heel Sneakers as well.  And it was something new, because nobody had ever really tried to do things like that on an acoustic guitar.  But it was kind of like a natural thing, it wasnt something where somebody sat down and said, Lets do it this way.  I just played, and it came out the way that it came out.  And California Dreamin, and all of these songs, I had done on stage before, so I already had the way and the concept in my mind.  So when we got the chance to record them, I did them the way that I used to perform them live to the audiences.

You happen to be the only artist to have ever been signed to a multi-tiered record contract with a major label to record in English and Spanish, as well as classical.  Do you have a problem juggling these very distinct styles?

Do you actually practice these different styles all the time, or do you just fall into them?

Ive been aware in the past that youve played from congas to the cuatro, as well as other instruments.  Tell me about that side of you, the multi-instrumentalist I guess.

JF: I play bass, I play percussion, and I enjoy playing different instruments, because when I write songs, I use those particular instruments.  I like playing percussion, I enjoy it, and I learnt by just playing.  You know, some friends used to have conga drums, so I learnt to play on their instruments.  I learnt to play bass because I used to play upright bass, the big bass, at school, with the school orchestra.  And I think these things help me out.  And the cuatro that I play is from Puerto Rico, which is different than lets say the cuatro from South America.  The cuatro from South America has only four strings, but the Puerto Rican cuatro has ten strings and it sounds a little bit like the bouzouki, or the mandolin.  You know, its got double strings.

Tell me about the line of custom-made José Feliciano Model guitars.

JF: The classical guitar for example that I have is a big guitar.  I had it designed that way, like a dreadnought, because I didnt like the classical guitars that you buy in the stores.  Theyre small and shallow sounding, so I had a special guitar made for me in California, and I like it because it sounds big, it has a deep, rich sound.  Its got a dreadnought body, and the neck is a cutaway neck, so that its easy to play.  And then I have a pickup put inside as well, so that when Im playing concerts, outdoors or whatever, I plug into the sound system, and it gives it a lot of volume.  But with electric guitars, I buy the regular electrics.  I like the Les Paul guitar or the Paul Reed Smith, those are my favourite electric guitars.

What is José Feliciano about in the 90s?  My introduction to you was via the now famous recording of the battle of Bilbao, recreated solo at the London Palladium some time ago.  Do you still do that kind of entertainment meets art music thing these days?

JF: Some places, but I dont like to play La Entrada de Bilbao in clubs because really, people there are not prepared to listen to that kind of thing.  But if Im playing in a theatre or a concert hall, then I might play La Entrada de Bilbao.  But you know, I try and play new things now, because I dont believe in just sticking to the old.  So in Australia I will be doing some new things that Ive written.  For example, I wrote a song called Crazy Heart, which I think people will like, its a little bit of a Latin American type of thing.  So a little bit of this and a little bit of that, some of the older songs that people know, but also some of the new, so that people know that I am going with the music rather than just sticking to the old.