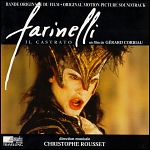 Born in Andrea, Naples, in 1705, Carlo Broschi was castrated around the ages of seven or eight, to then become a pupil of the celebrated Italian composer and singing teacher, Nicola Porpora.  Due to the prohibition imposed on women singing in churches or theatres at the time, talented young boys were selected for castration in order to stop their voices from breaking, and to retain their extraordinary vocal range into adulthood for the assumption of that role.  The castrato was then subjected to up to ten years of intense musical studies at one of the conservatoires, which included a programme of music history, composition and harpsichord, as well as a daily dose of song.  This was common practice in the Papal States from the late sixteenth century until the creation of Italy in 1870, when the new administration ceased to sanction the act.

Carlo Broschi was one of those chosen few, and once a prodigy of the Farina brothers adopted the legendary Farinelli name.  By the age of twenty-three he was performing at all the main European courts, universally proclaimed as the Singer of Kings for his remarkable timbre, expression, agility and range, which exceeded three and a half octaves.  In addition, Farinelli was also renowned for his incredible ability to sing two hundred and fifty notes to a single breath and to sustain a note for more than a minute.  With his phenomenal level of virtuosity and androgynous beauty he ultimately attracted the kind of fame and fortune synonymous with stardom, becoming the most popular voice of his century, and no doubt one of the greatest singers of all time.  At the height of this glory, he decided to retire from public performance at thirty-two to sing exclusively for King Philip V of Spain.  But Farinelli remained close to peoples hearts long after his premature departure from the limelight, and other famous castrati such as Caffarelli, Poporino, Senesino and Bernacchi were eclipsed by his almost mythical status.

The castrato legacy ended with Alessandro Moreschi in the early twentieth century, but its mysticism was immortalized by a series of recordings made of Moreschi and the Sistine Chapel Choir between 1902 and 1904.  These are the only recordings of a real castrato in existence, and therefore serve as an important historical snapshot, although their religious nature dismisses them as an analogy of the unique florid style of Baroque opera, so the true essence of Farinelli remains in the trust of written accounts and the realms of imagination.

The film about Carlo Broschis life was written and directed by Gerard Corbiau, and the soundtrack features the works of Carlos brother, Riccardo Broschi, his singing teacher Nicola Porpora, as well as Opera Seria composers of the period Johann Adolf Hasse, Georg Friederich Händel and Giovanni Battista Pergolesi.  Since the music associated with the castrato phenomenon required the vocal range of three and a half octaves, which no one possesses today, the producers initially explored the virtues of synthesis to then opt for the preferable alternative of utilizing two singers.  Countertenor Derek Lee Ragin and soprano Ewa Mallas-Godlewska were chosen to share the melodic compass, and the recording sessions that followed resulted in three thousand edits, arduously compiled over an eight-month period.  A computer process especially developed for the project was then used to digitally homogenise the two timbres, and thus the legend of Farinelli was reborn.