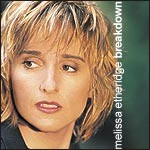 Andrián Pertout speaks to Melissa Etheridge during the Australian league of her Breakdown promotional world tour.

In this ultimately fickle world of pop music, Melissa Etheridge belongs to a rare class of artist, because it could never be said that her incredible popularity is the direct result of the multinationals, their hype machine and their ingenious marketing strategy to recreate her natural persona.  The sale of more than twenty-five million records, the two Grammies, and the ASCAP Songwriter of the Year award can only be really accredited to her honesty, belief and ongoing commitment to her own music.  Melissa Etheridge began transferring her feelings and emotions to pen and paper at the tender age of eleven, and a decade later, after being spotted performing at a club in Los Angeles, signed that influential deal with Island Records.  The highly charged rock n roll attitude and grass roots emotional sensibility that characterize signature pieces like Bring Me Some Water and Like the Way I Do have made Melissa Etheridge no less than one of the worlds great acts.  Her latest offering Breakdown comes about after a considerable break from the limelight, and highlights a production collaboration between Melissa and long-time touring guitarist John Shanks.  The cast on the album also includes regulars, drummer Kenny Aronoff and bassist Mark Browne, as well as guest musicians, Patrick Warren, Pino Palladino, Matt Chamberlin, Jon Brion, Steve Ferrone and Wallflowers keyboardist Rami Jaffee.

How did the magic of music enter your life?

ME: It was through the radio, in the early sixties, when I was very young.  And the first memory I really have is being about three years old, when our parents bought us a little transistor radio.  I remember listening to the one radio station we could get (chuckles), and hearing the Beatles, I Wanna Hold Your Hand, around 1964.  And I was just amazed and overwhelmed.  Our parents bought us records, and so we also listened to records.  And at first, I started playing tennis rackets, pretending, and then, when I was about eight years old, my dad went out and bought a guitar.  And I dont remember asking him for one, but I think he just took it on himself to go out and buy it, an acoustic guitar.

And would you say that it was a reasonably easy ride to the 25 million record sales mark, or a journey of countless heartaches?

ME: Well, its been a journey!  I wouldnt say there have been a lot of heartaches, its just been a long road, with a lot of hard work.  But its been a successful one, and successful in that Ive been able to make six albums and still have a career.  Im having a great time, and the funny thing is that my break didnt come in one big thing, it was a sort of progression of breaks.  When I was playing some bars around Los Angeles, I got my manager in 1983, and that a big break, cause he had some connections.  He brought this person down, that person down, records companies, until Chris Blackwell from Island Records came down in 1986, and that was my other big break, he signed me.

How would you describe your approach to songwriting?  Do you always use the acoustic setting to make the final judgement?

ME: I always use the acoustic guitar to make sure that the song is solid, because if I cant sit on this couch and play the song for you, and have you hear the melody and the words, and its solid, then its not done.  And as far as my songwriting approach, its always different.  In the past Id always kind of write as I go along, so Id get a bunch of songs and then go and make an album.  This time I took a year off, from writing and recording, everything.  And I knew I wanted to make a new album, so I started writing everything with that in mind.  But it wasnt pressure, Ive always been able to write.  And the inspirations are always different, because sometimes its about, I like this progression, sometimes its about, Boy, I wanna write about this subject, sometimes its a line that sounds good, sometimes I just combine two pieces that Ive been working on, and so its always different.

A recent press release mentions love and loss, consciousness and confusion, dread, hope and reconciliation as some of the topics covered in your songs.  You probably didnt write that

Is the main source of inspiration for your lyrics personal, or do you also borrow from the world around you?

ME: Most if it is personal, most of it comes from the inside out, but I am affected by the world around me.  The song Scarecrow on the album is about the brutal murder of Nancy Shepard in America, but it comes from how I feel about, it comes from my struggle with it.  And one of the topics that I seem to struggle with a lot is fear of abandonment and betrayal.  That subject is in a lot of my songs.  And a lot of relationship issues, like the song My Lover, and Breakdown, which is a song about a past relationship that keeps trying to drag me back into there.  But just kind of the angers and frustrations, hopes and desires of life.

What is in your private collection of guitars?

ME: I have a few really fun guitars.  I have a 64 Fender Telecaster Paisley, the original Paisley that they made, somebody sold it to me, but as a gift, because they sold it to me for less than what it was going for, and thats a real fun guitar.  I have a 72 Rickenbacker 12-string, its called a convertible, because it has this chrome contraption that comes up and pulls the high strings down, so that its a 6-string.  But of course the tuning never hangs in there, so its pretty useless, but it looks cool (chuckles).  I have an early 60s Martin, which I got at one of those flea market things, where someone was selling jeans.  They had a guitar, and I saw that it was a Martin, so I asked how much?  And it wasnt much, because they didnt know what they had.  But I mainly use the Ovation Odamus, its the top of the line, and theyre the best ones for stage, because my guitar playing is basically percussion (chuckles).  I beat the hell out of my guitars, and so I cant have nice quality, beautiful guitars, because they wouldnt last.  And Ovations are just sturdy and hardy as you can get, they stay in tune, the necks are smaller and the body is round.  And Im able to play it, so its the best thing for stage.

Tell me about the current Breakdown line-up.  I was delighted to see the inclusion of one of my all-time favourite bass players, Pino Palladino, among others.

ME: He is just the greatest bass player on earth.  He played on my fourth album, on Yes I Am, and so I brought him in on this album.  And Ive learnt not to tell him what to do, because he finds the holes, he is so musical.  Like in the song Into the Dark, all of a sudden theres this bass, and hes doing this wonderful line thats so melodic, but then hell just be there and be the bass too, its so part of it.  And my touring drummer is Kenny Aronoff, and hes the best drummer on earth.  But he was out with the Smashing Pumpkins for part of the time when we were doing this album, so hes only on about half of the songs.  And so I had to actually work with a lot of other drummers.  We brought Mat Chamberlin in, I used him on Mama Im Strange, and he has a really hip, cool, tight sound.  And Steve Ferrone, who is another monster drummer.  He plays on Angels Would Fall, and hes just a really groove kind of drummer.  Rami Jaffee from the Wallflowers came in and played some incredible keyboards, and John Shanks is my guitar player who just did the whole album.

How do you generally record the music in the studio?

ME: Each song is different.  A song like My Lover is completely live, theres like a couple of tiny overdubs on it, a little keyboard, but the vocals, all the guitars, my guitar, the drums and the bass are live.  But then a song like Enough of Me started with just a loop, I played my 12-string and sang, and then everybody put their parts on, one by one.  And just built it, to see what it would be like, as with the song Into the Dark, the same thing.  But then songs like Scarecrow and Mama Im Strange, theyre pretty live.  The song Truth of the Heart and My Lover are both performances that I was like, Come on, Im a little loud on that, but its just the feel of it thats great.  And then there were songs where we did a little tuning with Pro Tools on a couple of things, but mostly, we let the performance be.

What dreams do you hold for the future?

ME: I hope to be able to just continue on as Im doing, to make albums of the music that I love, to successfully come to different countries, and have people come and see me, thats a very cool thing.  And you know, I think that the reason why I was successful was because I was truthful and was just making music that was in me, and wasnt trying to make something to sell.  And thats what Id like to stick to