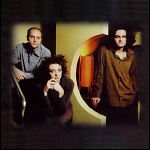 During the Melbourne league of their Australian tour with the Maviss, Andrián Pertout speaks with Peter Hardman about Effigys current pop status.

Originating from Perth, WA, the Effigy name is today synonymous with pop innovation, androgynous allure, and a sense of artistic glamour steeped in 80s traditions.  In the west coast they are well remembered for consummating the unconditional love and devotion of an ever-growing collection of hysterically enhanced maidens.  Since their move to the east, some of the highlights have included appearances on the high-rating television shows Recovery, Hey Hey Its Saturday and In Melbourne Tonight, as well as the current Australian tour with the Maviss.  The bands line-up features Peter Hardman on vocals, guitar, harmonica and keyboards, and includes the participation of bassist Cobina Crawford and drummer Jason Stacey.  Effigys new album Century Collapsing was produced by Kalju Tonuma and Peter Hardman, and justifiably debuted at sixty-five on the national charts.  The first single cut from the album titled Suspicion Bells is currently in the top 100 singles chart, and is living proof of the enormous potential of Peters songwriting talents.  There is a certain process of maturity that is shaping the Effigy physiology, and in the years to come it is inevitable that Peter Hardman will evolve into a distinct voice of the Australian pop music scene.

How did you decide on music for a career?

PH: "Well, originally I was going to be painter.  I have a degree in fine art and design with a painting major, which I did while I was starting up the band in the early 90s.  And I wanted to be in music since highschool, but I also wanted to go into other creative fields.  I gravitated towards art and then realized that it would be hard to do both music and painting, if you wanted to succeed in one particular area, so art ended up being shelved.  But thats cool, theres plenty of time to do that, and I can still change my mind.  And originally I just wanted to be a singer and lyricist, sort of like a Jim Morrison (laughs), or something like that.  And my uncle gave me a harmonica that I played, and I used to like playing blues songs and stuff.  But I could never really find the right person to write music for me to write lyrics over the top of, so I eventually picked up a guitar and had a crack at it myself, and realized that, I can do that, yeah.

What is the essence of your guitar sound?

PH: "It was about 1993 when I got my first Zoom, and I couldnt believe it when I got it, because of a dream years before.  Id never heard of them before, but I had this dream about a box that when I would play the guitar through it, would make everything sound like what I had heard on albums.  I had no idea, and suddenly I had this thing.  And I spent most of the time trying to mimic guitar sounds from like the Cult, She Sells Security (chuckles), and some Cure sort of guitar, just like lots of flange and delay.  And then I got a new Zoom, the 3030, which is really good, and has this pedal that you can assign to link like a volume pedal, or a wah-wah, or to increase the speed of a tremolo, taking the reverb off, whatever.  And yeah, I like fiddling around with effects and things, and I used to use a Fender Strat, but it didnt really suit me, so I tried Gibson SG copies, all sorts of things.  But the guitar that I love at the moment is this Les Paul.  I never used to use them, and because I have a fairly unorthodox way of playing.  I dont use a plectrum, I use my fingernails, and I play all up and down the fretboard, so I used to find that the pickup switch at the top would get in the way.  But its such a nice sound that Ive altered my playing to accommodate it.  And Ive gone through a lot of different amps, I used to use Valvestates, but that hybrid thing wasnt working.  So Ive just gone for valves, theyve got this really nice sound.  The amp that Im using at the moment is a Peavey VTM60, it really warms up my digital effects, and thats what I mainly look for in an amp now.

Did you ever doubt the bands direction and commercial potential?

PH: "I still do, I feel like I write pop songs, but not quite the usual run of the mill sort of thing, which can be good, it can make you stand out, but I do feel like a lot of people just dont get it.  But thats OK, you have to think about what is actually important to you, because if what drives you is other peoples perception of what youre doing, then yeah, assimilate by all means, if you really care about that sort of thing.  But in the end I know I havent written a good song, if I havent written a good song.  So if no one else likes it and I do, thats OK.

How did Effigy initially get a break?

PH: "Well, we just played around Perth for years, and we planned to move over to Melbourne, because wed got quite big in the local scene over there and thought, The bands gonna die if we just stay here, because if you get a big fish in a little pond, you just cant do really anything with it.  So we were planning to move over to Melbourne in 96, and then around February a guy from Roadrunner accidentally came to a gig and saw us, and said, You guys are great!  And we negotiated for a while, and moved over, which was what we were planning to do anyway, but this time we had a little bit of help, and I cant imagine how hard it wouldve been if we didnt have that help.  But yeah, its one of those horrible things, we just pretty much signed with whoever asked us first (chuckles).  And then you hear all these stories, like from Sony, We were gonna sign you guys!  But no, we are really happy with Roadrunner.

Tell me about your new album Century Collapsing.  Did you explore any interesting recording techniques in the studio?

PH: "Kalju Tonuma and I produced it, and we were in a very similar wavelength most of the time with what a song required.  And in some instances it was almost homage to moments of recording genius.  You know, Im a big fan of the series Dancing in the Street, and we trying all sorts of things, like Phil Spector sounds type stuff and Enoesque thought process (laughs).  It got kind of strange, but revolutionary Im not so sure.  When youre in that carbon-free environment, its almost anything goes.

How would you describe your approach to songwriting?  What do you consider to be the main ingredients of a good pop song?

PH: "Its trying to find a melody that will endure, and then cross-referencing it with your record collection to make sure that you havent plagiarised anyone.  And then structure, and just structure.  You know, you can have the most brilliant tune, but if you havent got the right bits happening in the right place you havent got a pop song.  And you want to learn from the formulas that were handed down throughout rock history, and assimilate all these different influences, but you also want to add something of your own to it.  Thats what I think

If tomorrow you were going to write a song, what would happen?

PH: "What I usually do is go straight to my eight-track digital recorder, and I lay down some sort of jam sequence for myself, a chord progression, or some sort of bed of stuff to improvise over the top of.  I then try to find different ideas for that, and if somethings not working, I try swapping instruments and go through keyboard sounds.  And I think you basically know a song is good when you never forget it.  I mean, theres a couple of little tunes that Ive got on this album, like the first song Heart Desease (Peter proceeds to hum one of his original tunes).  I wrote that little tune and chord progression in 93, and its never gone away, so it makes you think, Oh well, its gonna mean something!

What is the future for Peter Hardman and Effigy?

PH: "I dont know, I just want to write songs, thats really what I really want to do.  And I see music as always there, I cant get out of it now.  Id like to write soundtracks, play classical music and jazz, the stuff I cant do, Id like to do the stuff I cant do.  And Id like to get the time to think about what I want to do for the next bunch of songs.  Id love to get more rootsy, and more organic in the Tom Waits kind of way.  Thats kind of where Im heading.