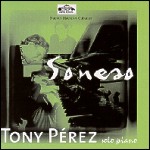 The New Masters of Rhythms

Cuban music is becoming an eclectic mix of styles and, as Andrián Pertout reports, Tony Pérez and Ramces Baralts versatility is leading the way.

Cuba, the birth place of the rumba, the mambo, the son, the chachachá, the danzón, the habanera, and more recently, salsa, represents the last Spanish stronghold in the Americas, finally gaining its complete independence from external domination in the revolution of 1959.

Its strong African roots have had a great influence on the music, creating Afro-Latin hybrids rich in rhythmic and harmonic content.

Cuba is also home to a multitude of talented musicians, and among them are pianist Tony Pérez and drummer Ramces Baralt, graduates of the renowned National School of Arts in Havana.

As members of the Nuevos Maestros Cubanos, or New Cuban Masters, they will perform at this months Melbourne International Jazz Festival, which is co-sponsored by the Sunday Herald Sun.

Here (Cuba) study requirements are very demanding and very deep, because not only do we study the instrument, but also the nature of music, Pérez says.

And we study classical music, not jazz  although today there are jazz schools.

It is compulsory to begin piano and violin lessons at seven years of age, although exceptions are made for other instruments.  I have studied the piano since I was seven years old.

Fidel Castros communist Government is well respected for the support it gives to promising artists.

I can tell you that we have been lucky, because we havent had to pay for our studies, or anything else, Pérez says.  And as Cubans, we are very grateful for that.

With his collaborations with Cuban salseros Isaac Delgado and Klimax, as well as the legendary Fania All Stars, Pérez, 26, has already achieved several milestones.

Pérez playing style is described as being a hybrid of classical, jazz and traditional Cuban forms.

I listen to all good music, and good music exists in any part of the world, not just in Cuba, Pérez says.

Although Cuban music interests me greatly  its in our blood.  You know that the Cuban is musical, happy and rhythmic, that its a very rich musical tradition, because theres also Cuban folk music, theres African music and Brazilian music.

A similar versitile approach is taken by Baralt, whos album Fetecun includes a a strong spiritual element in its homage to Eleggúa, a prominent orisha (deity) from the West African religion of Santería.

Other styles covered on his album include blues, jazz, rock and rap.

Baralt believes this musical cross-polination is the new face of Cuba.

Yes, I think so, because 10 or 12 years ago, everything was very concentrated around pure Cuban music, and the scene was not open to other genres, but now I think there is space for nearly the whole world here in Cuba, Baralt says.

There are the rappers, the rockers  and there are good groups in each genre.

Peréz and Baralt will be joined for their festival appearance by trumpeter El Indio and bassist Jorge Alexander.

Nuevos Maestros Cubanos will perform at the 9th Ward (corner of Flinders Lane and Elizabeth Street) on Saturday, January 22, from 9.30pm.  Festival hotline: 1300 655 465.