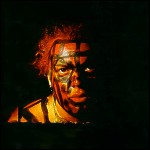 In the Brazilian south-eastern city of Belo Horizonte, seven year-old Igor Cavalera begins his musical journey as a stand-up drummer, performing in the soccer matches, and jamming out with the local samba aficionados.  The turning point in his musical career then comes in the early 80s, and through the avenue of Queen's rhythmic crusader Roger Taylor during their 'Game' tour of '81, where Igor first comes face to face with the awesome power of rock music.  Several years later he forms Sepultura with brother Max, thus creating the artistic vehicle that will yield a series of globally successful and innovative albums into the next decade.  Roots featured the sounds of the Xavantes tribe, and as well as becoming yet another platinum release for the band, its 'world music meets heavy metal' musicality paved the way to an influential standing for Sepultura.  Their latest album 'Against includes the participation of Japanese percussion group Kodo, and with the departure of Max Cavalera, marked is the arrival of new vocalist Derrick Green.

How did the art of drumming enter your life?

IC: "Well, at first like, I started playing stand-up drumming in Brazil.  And its very common with the whole samba thing.  You know, where you pick up one instrument, like the snare or surdo (Brazilian double-headed snare drum).  And I picked up the snare, because I really liked the rolls and everything.  So I started playing that when I was about seven years old, and then I would go to all the football games with my father and brother, and play the drums.  Cause on the games, everybody brings their drums and beat on them.  So I did that at first, and then after that I started like getting more and more into playing.  I would get together with friends and do like little jams, where we would be playing samba like for hours and stuff.  And after a few years of just playing like that, I asked my dad to put me in a drum school.  So he actually took me, and I didnt like it (laughs).  It was so tight, not loose, and I like loose things, where you really capture the spirit of it all.  And I didnt feel anything when I got those drum lessons, I thought, Its alright, but its not what I really want.  And then I was already set up to play drums, I didnt want to play just the stand-up drumming, I wanted to play the drums.  But I was still influenced by samba, because I didnt like rock music at the time.  And in 1981, when I was about ten years old, my cousin took Max and I to go and see Queen, and it was like amazing!  If I had to pick a show that really changed my life, that would have to be it.  That was Queen, the Game tour, and I saw Roger Taylor on the drums, and I was like, Thats it, thats what I wanna do! (chuckles) That style of drumming.  So after that I started listening to a lot of more rock music, and my drumming totally turned way around to rock.

What are some of the Brazilian influences that you have incorporated into your rhythmic style and technique as drummer for Sepultura?

IC: "It was the basics of it, because the basics of it was all in samba.  And I couldnt have had a better school if I wanted to, it was just natural.  And actually, when we were doing Roots, where we came back to a lot of those elements, it was so natural, it didnt feel like I had to do any research or anything like that. It was just like, Alright.  It felt a lot more natural than a few years before when I was trying to play just like a rock drummer, so for me it was perfect.  And I still played in some of the rock and metal styles, but the whole base of it was looser, and with a lot more groove to it.

How did the environment that you grew up in impact on your music?

IC: "My house was very musical, like my father was a musical fanatic, just like Max.  Max is the same way, you know, its music twenty-four hours.  And we were listening to all kinds of music, and to the point that later on we even found Black Sabbath and Led Zeppelin on my dads collection.  And at the time we had no idea that he would listen to something like that.  He would also listen to a lot of Brazilian and Italian traditional music, so it was crazy, it was like, Wow!  And that influenced us somehow, even though we were not connected to that music, because growing up youd be hearing all kinds of music at the house, not only one kind.  That is something that I totally remember, and today I think its part of us really, because when youre brought up with all that its easier to assimilate different kinds of music.

Roots featured the sounds of the Xavantes tribe.  Tell me about your special connection to this particular tribe of the Amazon forest.

IC: "Well, in Kaos A.D. we wrote a song called Kiobas, and that talks about a tribe in Brazil.  And then after doing that, on Roots we wanted to really go deeper into the whole concept.  So we wondered what we could do to really make an impact, and we felt that going to meet a tribe and recording them would be like the biggest achievement that we could hope for.  So thats the kind of idea that we had at first, but we didnt even know if it would be possible.  And the main reason for picking the Xavantes is that they really keep a very good relationship outside the tribe, where theyre really involved with music and art.  That was the main reason, like a lot of other tribes dont really get too involved with music, they get too involved with politics.  And the Xavantes are very different from that, because they really put a lot of effort into their music and their art.

How did they react to the Roots album?  Did they ever get to hear the end result?

IC: "Oh yeah, and they were even telling us like how a lot of people that had worked with them in the past had disappeared, and never even sent a picture.  So it was kind of sad, and we were like, Man, weve gotta really keep this in a way that they will be totally happy about it, because we want to keep this relationship.  So after we put the album out, they kept hearing about us, because we kept calling them and telling them what was going on.  And we recently played a show, on the fifteenth of August, and they came to perform with us.  It was their way of saying thanks for everything that we did on Roots, and the way that we kept their integrity intact with the album, because we really didnt do anything to hurt their image.  So they came and performed with us in front of twenty thousand people in São Paulo, in Brazil.  And to see them in that environment was like, Wow!  What a sacrifice they really made, because if I lived the way that they do, it would be totally crazy to go through what they did.  You know, it was madness really, the concert (laughs).

Your new album Against on the other hand includes the participation of Japanese percussion group Kodo.  How would you describe this unique experience?

IC: "Well, Kodo is a band that we discovered a long time ago, actually around Kaos A.D. or so.  And we always kept saying that we should work with them, but we never found the right timing to do it.  And then when we were writing Against we just said like, This is it!  Weve really gotta work with them.  The fact that Roots was very much related to a lot of Brazilian influences, we also thought that if we used Koto at that time it would be kind of crazy, it would be too much.  So we got in touch with Kodo, pretty much in the same way as with the Xavantes, and they were totally into the idea of working with Sepultura.  And we had the idea to go there and work together, instead of just sending a tape for them to do drum overdubs.  So we flew in to Sado Island, outside Tokyo, its where they live, and it was amazing, just being there and also experiencing their culture.  And living like they lived, the same way that we did with the Xavantes.  Like sleeping in the little houses, totally Japanese traditional style, eating their food, everything about it was very special.  And then to get to play with them was so powerful, like their drumming is amazing. Its hard to describe it, theres no way you can recreate the same sound. It comes from the human inside, it really hits inside your soul, so to play face to face with them was amazing.

The first part of this interview was published in Mixdown Monthly issue #54, October 1997. In this article Igor Cavalera and new vocalist Derrick Green discussed the birth of the band, Max Cavaleras departure, as well as their latest album Against.